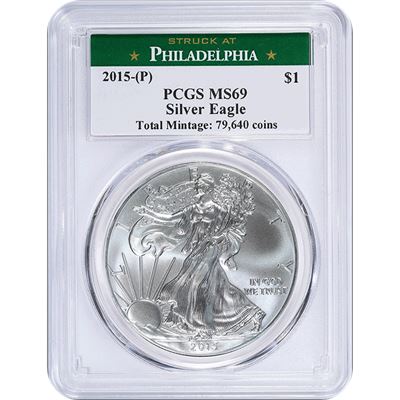 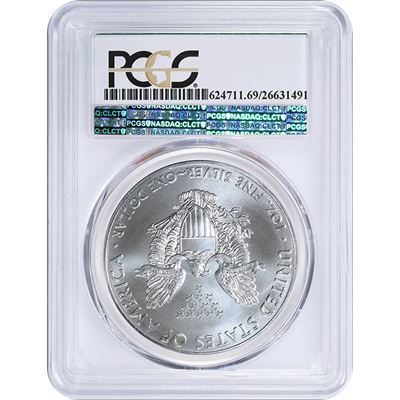 Click image for larger picture.
As low as
*Price changes every 5 seconds. The price added to cart will reflect the current spot price. Discount is calculated savings compared to credit card pricing for one unit quantity.
$550.00

It was recently discovered that the U.S. Mint struck a very small amount of American Silver Eagle coins at the Philadelphia Mint in 2015. These coins are usually only produced at the West Point Mint. Now, PCGS has certified each of these ultra-rare Silver Eagles as MS69, just one point shy of a perfect grade!

Adolph Weinman's classic 1916 "Walking Liberty" design appears with slight modifications on the obverse design. Lady Liberty is shown striding triumphantly toward the rising sun, draped in a dress designed like the American flag. She carries oak boughs and beckons toward the dawn of a new day with her other arm.

On the reverse, a bald eagle with its wings spread is shown, as designed by John Mercanti. It is surrounded by inscriptions indicating the issuing country (above) as well as the coin's weight and denomination (below).

Don't miss your chance to own the rarest bullion version of the Silver Eagle ever minted! You can get your 2015-(P) American Silver Eagle PCGS MS69 from Gainesville Coins, but only while they remain in stock! 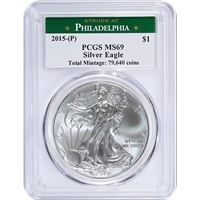