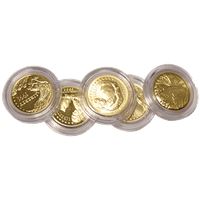 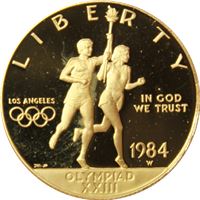 The first official commemorative gold coin minted in the United States was in 1903 for the Saint Louis World's Fair. Since that time, US Mint gold commemorative coins have celebrated a myriad of subjects. Modern examples include the First Spouse gold coin series and gold coins honoring the US Army.

One of the first commemorative gold sports coins honors the 1988 Summer Olympics. The coin features a bust of Nike on the obverse and the Olympic gold rings and the Olympic cauldron on the reverse. Nike is the the mythical Greek goddess of victory. She is said to be the physical embodiment of victory and has been a symbol of the Olympics since 1928.

The US opened the World cup in a match against Switzerland on June 18th, 1994 in the Pontiac Silverdome and made to the round of 16. Gainesville Coins is proud to offer US gold commemorative coins in uncirculated, proof and certified varieties.