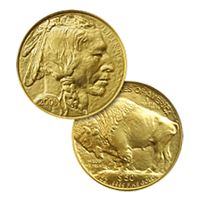 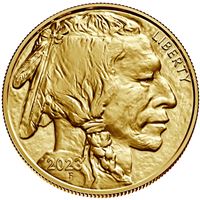 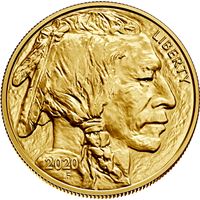 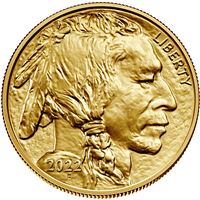 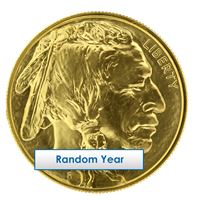 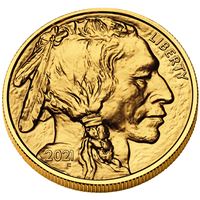 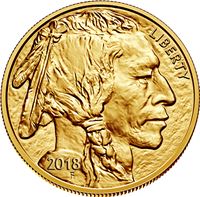 Realizing the demand for a 24-karat gold coin, the US government authorized the Gold American Buffalo with the Presidential $1 Coin Act of 2005. Gold Buffalo coins, first introduced in 2006, are the second bullion coin produced in the United States. Since 1985, the only American gold bullion coin was the American Gold Eagle, but it was soon joined by the Gold Buffalo. Gold Buffalos are available only in a $50 denomination and some are eligible for precious metals IRAs.

The design of the American Gold Buffalo is a modified version of the noted Buffalo nickel designed by James Earle Fraser which was first issued in early 1913. The obverse of the coin depicts a Native American profile. The right-facing profile blankets the whole of the obverse, leaving room only for the date at the base of the portrait and the word, “LIBERTY,” to the upper right of the profile. The reverse features a left-facing American Buffalo standing atop a mound. Inscribed along the base of the coin are the weight, purity, and denomination of the coin. Inscribed along the top rim of the coin are the words, “UNITED STATES OF AMERICA.” Just underneath the word, “America,” the national motto, “E PLURIBUS UNUM,” can be found in smaller lettering.

The Gold Buffalo design only deviates very slightly from the original nickel design. The main difference is the inscription of the denomination, weight, and purity.

The design by Fraser is supposed to be inspired by the faces of three different Native Americans. While two of the three people were identified by Fraser, the third model remains a mystery. There remains some controversy as to who this unknown model is. Many Native Americans have come forward as the enigmatic third model, but because of a lack of acceptable documentation, no one has been accepted.