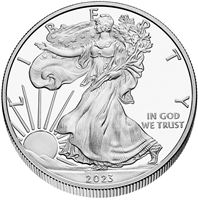 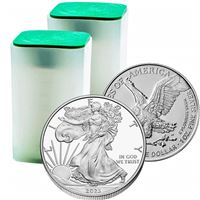 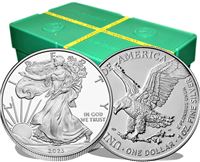 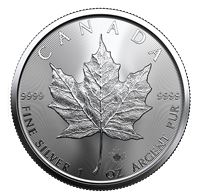 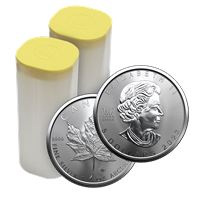 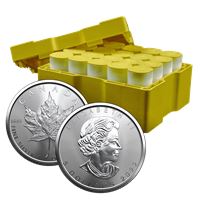 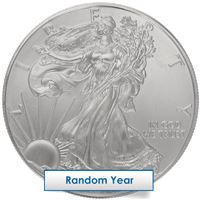 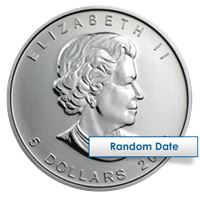 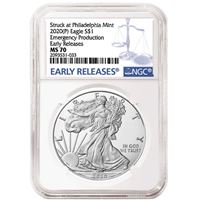 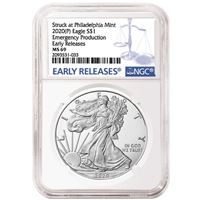 Silver coins were one of the earliest forms of money in human history. Today they are used as investments or collectibles.

You may wonder which silver coins are the best to buy. What's the difference between them? Most importantly, why should this matter to you as a customer?

Below is a comprehensive list of the different types of silver coins. You can use it as a buying guide of shopping options if you are new to bullion and numismatics.

In the 1980s, several governments introduced legal tender bullion coin programs expressly intended for investors. These coins are all at least .999 fine silver in terms of metal content, meaning they are at least 99.9% pure silver. In most cases, they contain one troy ounce of silver by weight (1 troy oz ASW).

The Silver American Eagle is the most popular of the American Eagle coins that launched in 1986. Its gorgeous design isn't its only appeal. The Silver Eagle is also one of the most trusted silver bullion products anywhere in the world.

The Silver Maple Leaf made its debut in 1988 and is the king of Canadian Silver coins. One of its distinguishing features is its .9999 pure silver content. This fineness makes the Canadian Maple Leaf the highest purity 1 oz silver coin on the global market. In recent years, sales numbers for the Silver Maple have rivaled the Silver Eagle.

Silver Panda coins were introduced in China in 1982. Since that time, they have become well-known around the world. These coins especially appeal to investors who buy silver bullion with collectible potential. Silver Pandas recently switched to using metric measurements (grams) rather than troy ounces.

Australia's Perth Mint is known for its three wildlife coins. These are the Silver Koala, Silver Kookaburra, and Silver Kangaroo. The mint's Silver Lunar series of bullion silver coins is also a welcome addition to the market. These are some of the only series to offer 5 oz and 10 oz versions of their coins.

The "Silver Phil" is a relative newcomer to the bullion industry. It is made by one of Europe's oldest sovereign mints, the Austrian Mint. Since its introduction in 2008, it has become Europe's most popular silver coin. Its unique design honors the country's famous Vienna Philharmonic Orchestra.

During the 1960s and 1970s, rising silver prices forced governments to remove silver coins from circulation. Today, these "junk silver" coins are often the most cost-effective way of buying silver coins.

During World War II, the U.S. needed to ration industrial metals like nickel for the war effort. As a result, the composition of the five-cent coin was temporarily switched to a 35% silver alloy. You can find out more about silver "war nickels" and how to tell them apart.

The smallest denomination of 90% silver coins are dimes. Their small size makes them an affordable option for coin collectors and silver investors alike. They are the preferred way to buy silver for many people.

Up until 1964, quarters were also struck from 90% pure silver at the United States Mint. The quarter-dollar denomination has long been the most useful U.S. coin for everyday commerce. Today, silver quarters are often sold is $10 bankrolls of 40 coins each.

Half dollars have largely become forgotten coins. They were once widely used by the public many decades ago. The Kennedy half dollar was 90% silver for one year in 1964. From 1965 to 1970, these coins were struck from 40% silver.

The silver dollar is the largest silver coin in the United States. Traditionally it had the highest denomination among circulating coins. In truth, American shoppers tended to prefer paper bills to the hefty coins. This left silver dollars idle in bank vaults. Later they became attractive collectibles.

Morgan dollars are the most widely collected U.S. coin. They are rivaled only by the Lincoln cent in this regard.

Ironically, these silver dollars were not popular at the time they were made. Most Morgans simply sat in banks. Eventually, tens of millions of them were melted down. This mass melting contributes to their collectible status.

Eisenhower dollars were the last 40% silver coins produced regularly in the United States. The coin was minted from 1971 to 1978. However, only a small percentage were composed of silver.

The silver Eisenhower coins have a net weight of 0.3161 troy ounces of pure silver. They combined an inner core of 20.9% silver with outer layers of 80% silver. Overall this resulted in a 40% silver composition.

All of the silver "Ikes" were struck at the San Francisco Mint. However, not all Eisenhower dollars produced in San Francisco are the silver version. Check out this helpful guide to tell the two apart.

The appeal of silver as money was a universal concept. It's no surprise that you will continue to find silver coins produced in every corner of the world. Each region and country tends to have its own style and standards for the coins. Native wildlife and cultural symbols are common themes in the coin designs.

Mexican Silver Libertads are Mexico's most well-known silver coins. These modern silver bullion coins are known for their beauty. Their design depicts the Angel of Independence statue in Mexico City.

The British Royal Mint ranks among the most prestigious government mints anywhere. Its history traces back to the late 17th century.

Other major mints in Europe are found in France, Germany, and Austria. Some French silver coins honor the Chinese Lunar New Year. This follows the model set by Australia and the United Kingdom (U.K.).

Several countries in East Asia besides China are active in the silver market. Most notable among them is South Korea. The catalog of South Korean silver coins includes the Silver Tiger and ZI:SIN series. The most popular is the Chiwoo Cheonwang Silver bullion series that began in 2016.

Sometimes overlooked, silver coins from the island nations in the Caribbean Sea are often collectible. Jamaica and the Bahamas regularly issued sets of silver proof coins after gaining independence. Sometimes these sets were made at private mints such as the U.S.-based Franklin Mint.

Australian silver coins aren't the only silver products from this region. Several of the island nations in Oceania contract larger government mints to strike their silver coins. Niue, Fiji, and the Cook Islands are a few examples of this trend.

Silver coins from the Middle East and Africa are somewhat scarce, especially compared to gold coins. On occasion, they will be issued by the respective government as collector's items. Interestingly, this region once relied upon silver coins from central Europe known as Maria Theresa thalers.

Some silver coins have a numismatic value higher than their intrinsic metal value. In other words, they possess collectible appeal over and above the silver spot price.

Collectible silver coins tend to fall into two major categories. These are discussed below.

A silver proof coin is specially made for collectors. A wide variety of designs are produced in proof, creating some of the world's most beautiful coins. They are usually given a mirrored finish that stands out against frosted relief devices.

Accordingly, proofs are generally produced in limited quantities. More exceptional care and labor goes into their manufacture. Many popular silver bullion coins also have a proof version. The prices for proofs are thus higher than their uncirculated counterparts.

The use of color on silver coins is a recent innovation. New technology made this feature possible. The Royal Canadian Mint is one of the leading innovators in this area.

Like proofs, colorized coins are usually more expensive. They are also a great way to introduce children to coin collecting.

Gainesville Coins makes buying silver bullion or collectible coins easy. We carry a wide selection of the most trusted precious metals items. International orders must be paid for by bank wire, even if you order online. Domestic purchase orders can be paid by credit card, check, bank wire, or even cryptocurrency. Silver coin prices are based on the silver spot price plus a small premium. It works the same way with gold bullion and gold prices.

The final sale price for your order will be locked in once you complete the checkout process. Shipping times will depend on the availability of the product you buy in our inventory. In stock items usually ship in less than two weeks. Check our Daily Deals and clearance items often to see what silver coins and precious metals products we have for sale at discounted pricing. These make great gift ideas or an addition to your investment portfolio.

Gainesville Coins sells everything from large gold bars to old silver dimes at low, low prices. We ship precious metals to 47 countries worldwide. We probably ship to yours! Buy silver coins online or in our showroom on site. Shop for gold and silver bullion at great prices at Gainesville Coins.