Below is a list of the most valuable Jefferson nickels, presented in ascending order. Prices have been updated to reflect the current market.

Decades of experience from numismatic experts informed the research for this list. The images and explanations are a great way to learn more about modern coin collecting!

All values are for coins grading Mint State 65 (MS65). Higher grade examples and those with the Full Steps designation will exceed these prices.

Available only in 1964 Special Mint Sets, it is believed that less than 40 examples of this sharply struck matte proof exist. Its existence was unknown until a 1993 Stack's auction. The 1964 SMS remains one of the rarest Jefferson nickels. 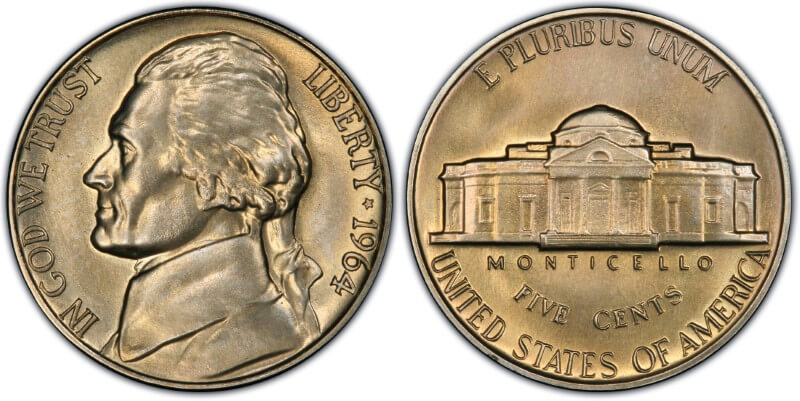 The extraordinary sharp strike on this matte proof 1964 SMS Jefferson nickel is even more impressive than typical proof coins. It was part of a prototype Special Mint Set that was never released. 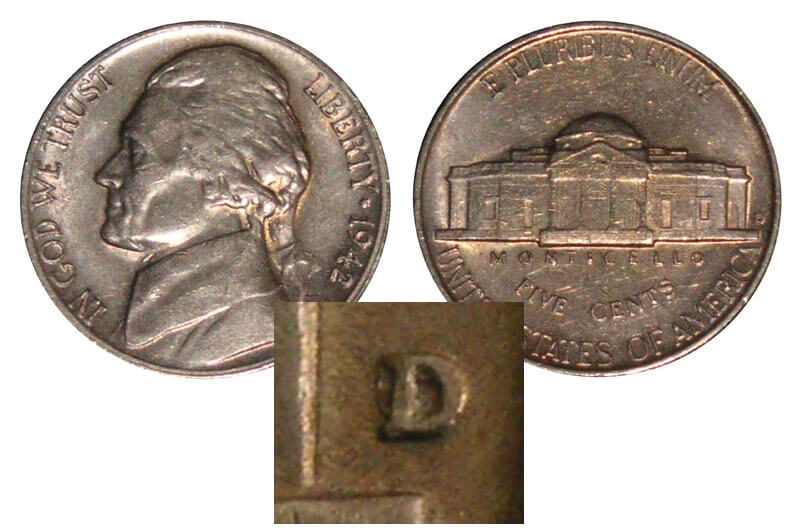 The strange horizontal alignment of the "D" (above) is difficult to miss once you see it!

The fact that mintmarks were still hand-punched onto working dies for much of the 20th century made this type of error possible.

On the popular Numista forum, the user edduns points out:

"1989 was the last year of the hand-punched mint-marks on US coins."

This coin is by far the most desirable Jefferson nickel variety. It's estimated that roughly 20,000 examples exist.

The "Full Steps" designation is given to sharp, well-struck 1942-D (D/D) coins. This small subset (perhaps 500 examples) sells for a significant premium, with prices up to $10,000. 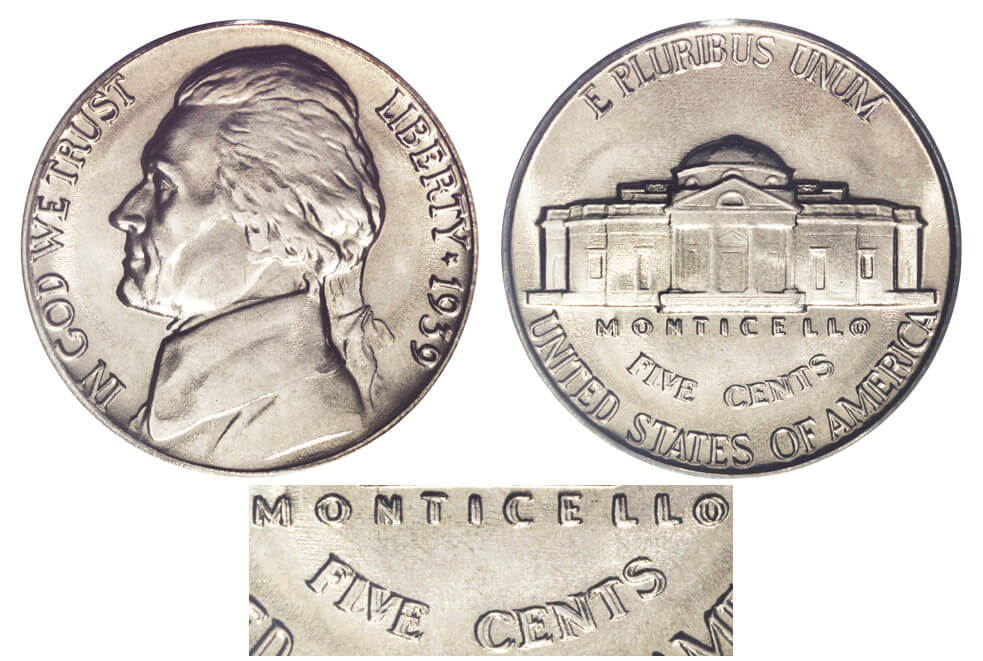 Monticello is the iconic estate designed by Thomas Jefferson. It appears on the reverse design of all Jefferson nickels, with the exception of the Westward Journey subset (2004–2006).

The doubling effect is on the word "MONTICELLO" and other inscriptions (shown above), not on the building itself. 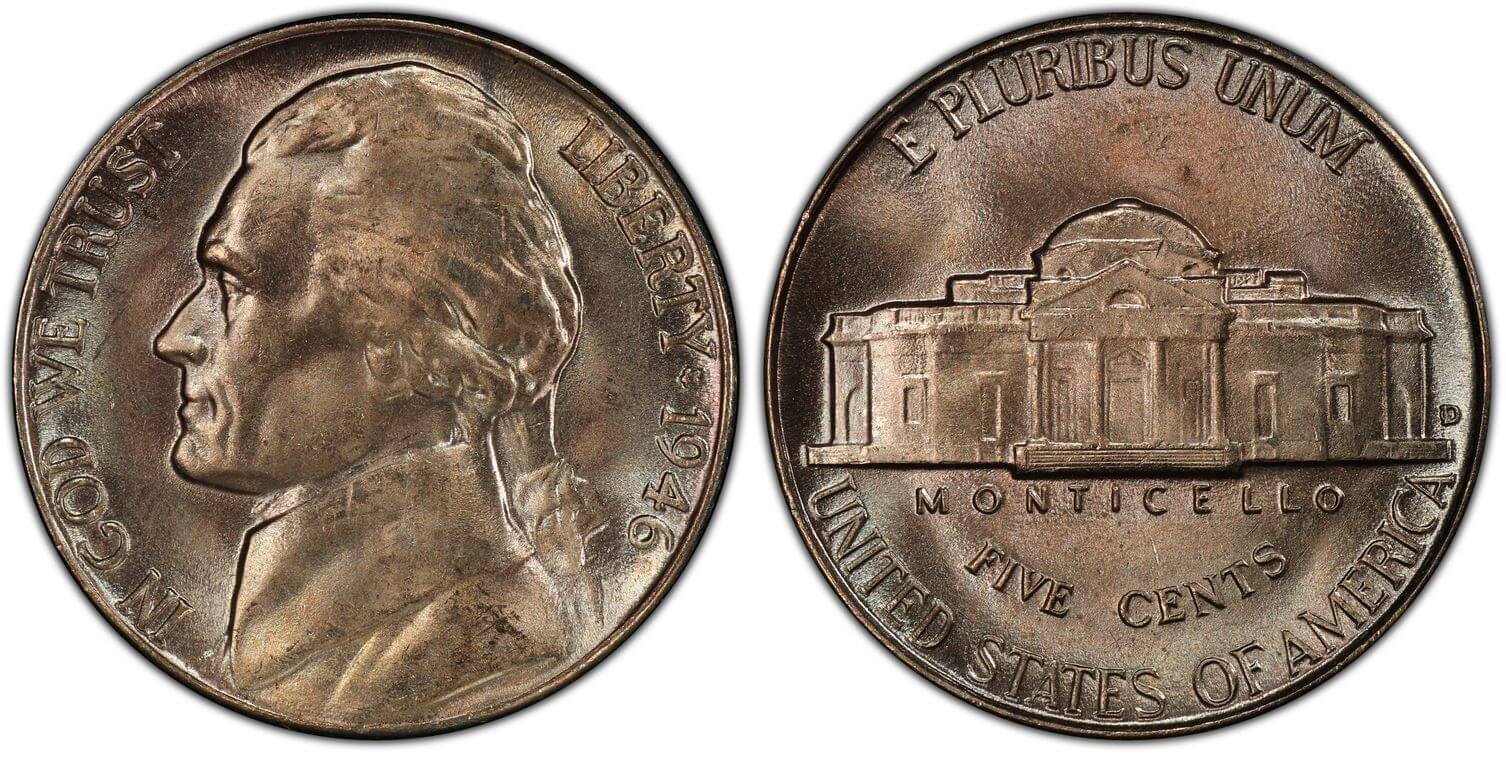 In this case, the "D" mint mark was struck upside down before being struck over with a D in the correct position. You can see the curve of the inverted D to the left of the vertical part of the regular D. 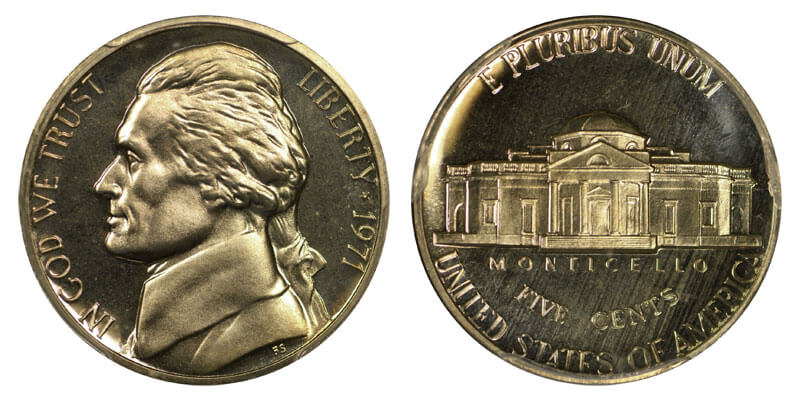 Proof Jefferson nickels were only minted in San Francisco in 1971.

However, some 1,655 proofs were mistakenly struck without the "S" mintmark. This is a tricky "error by omission." To date, only a few hundred of these "No S" 1971 Jefferson nickel proof coins have been graded by NGC and PCGS combined.

Such errors have cropped up on other denominations, as well. One prominent example is the 1922-D "No D" penny that's missing its intended mintmark.

Usually, it was easier for the mint to replace one digit of the date rather than use a whole new die. However, in this case, the entire date (all four digits) has been stamped over the previous year.

Like its 1942 counterpart, this coin features another overpunched mintmark. 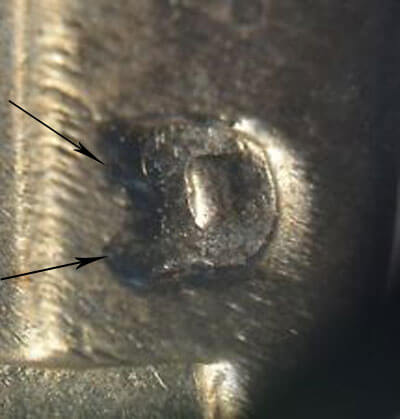 Accurate data for these two questions is not always forthcoming. A lot of sleuthing may be required! Values are based on the best possible estimates.

Doubling errors are typically some of the most well-known and easy to notice visually. 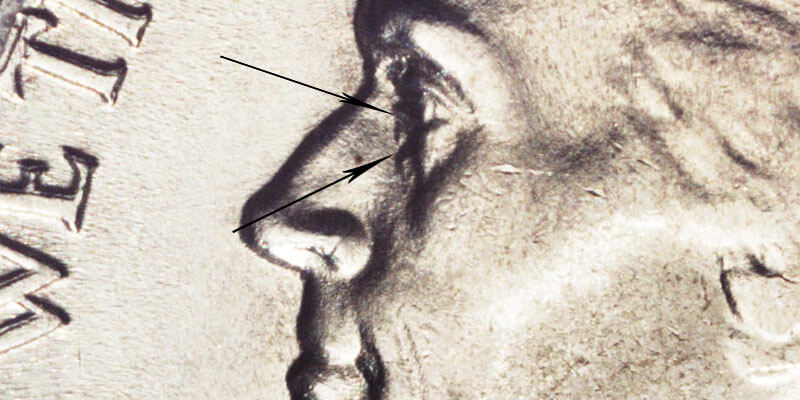 Yet as the image above shows, it's not an especially recognizable error with the naked eye.

The 1943-P is also a silver war nickel, adding to its appeal. 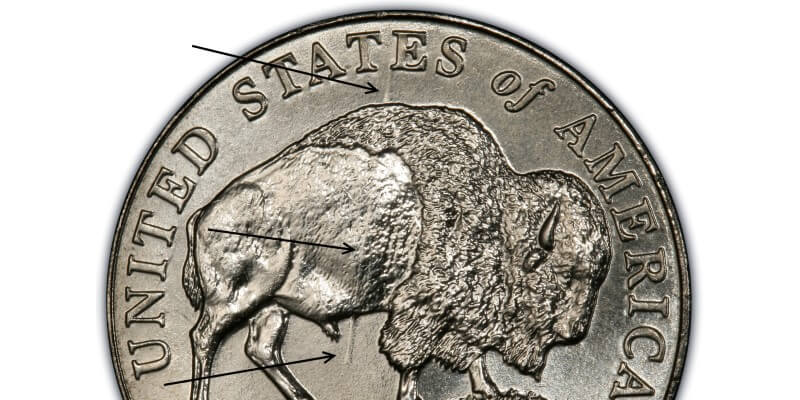 The most modern coin on the list features what looks like a spear running through the bison's back due to a die gouge.

This one-year issue was part of the new set of "Westward Journey" designs minted from 2004 to 2006.

Like the spooky "Doubled Eye" nickel, this is another doubled die error. It appears on the reverse design. (It's also the last year silver nickels were produced.) 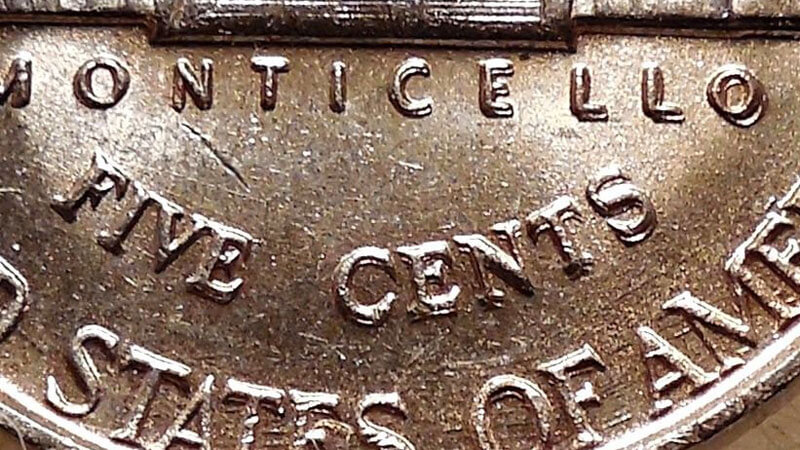 The most famous doubled die variety on a U.S. coin is the 1955 Lincoln cent.

Because it was struck using the old reverse die of 1938, the proof 1940 Jefferson nickel shows less detail than later issues. 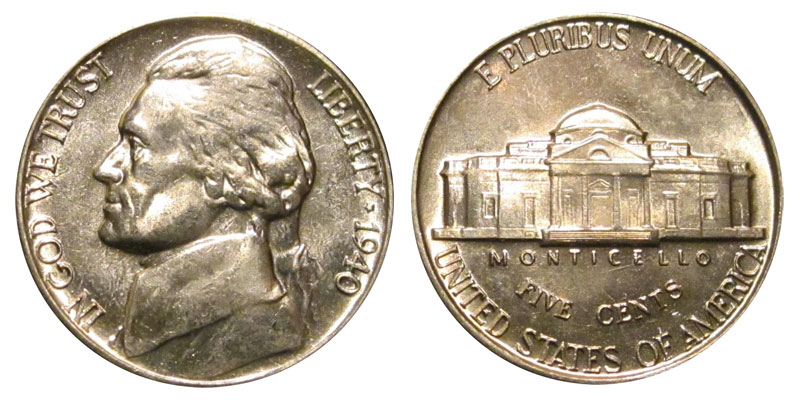 Despite being a proof coin, which generally exhibit higher quality strikes, these 1940 Jefferson nickel proofs show softer details due to using worn-out dies.

This is an example of an overpunched mintmark. As the rest of this list will reveal, it's not a particularly uncommon type of error. 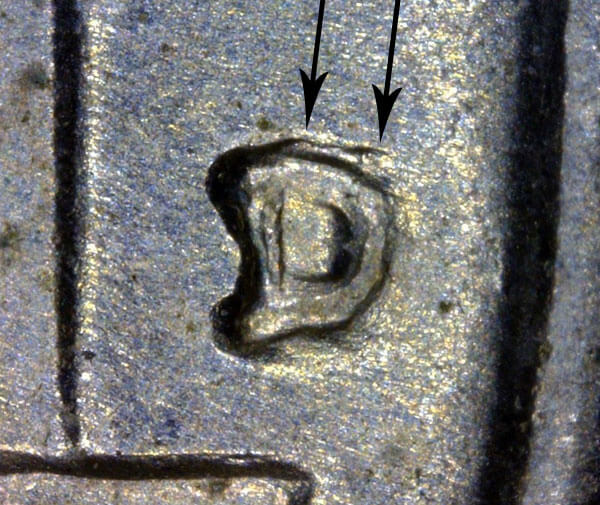 In the photo above, you can see the faint shadow of an "S" behind the outline of the "D" mintmark. It is found on the right side of the reverse. 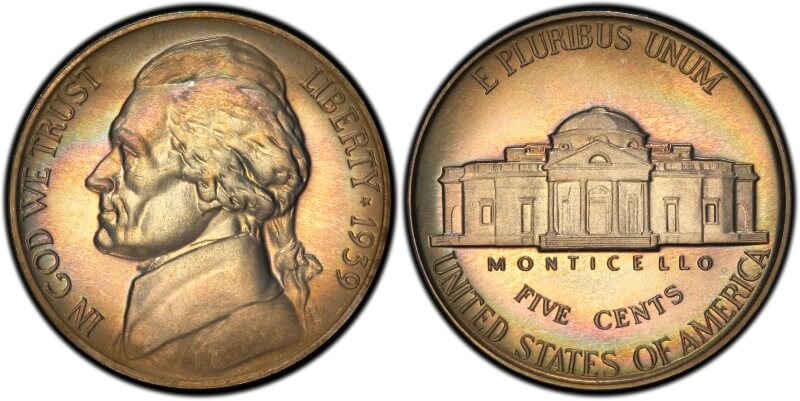 The sharper reverse design used for these proof coins was introduced in the middle of 1939. It was unchanged until 2004.

The "S over D" variety of the 1954-S is another example of a mintmark error. You will typically find the bottom of a "D" jutting out from below the "S." 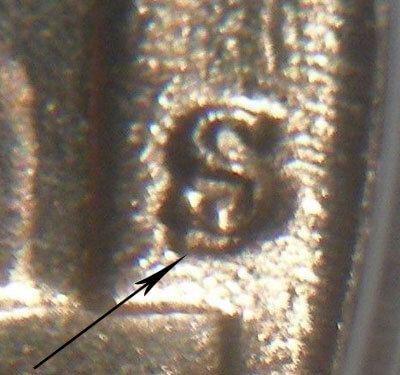 Back then, branch mints would simply stamp over an existing mintmark on a die when necessary. Circumstances such as a tight production schedule or a worn-out die might have forced a mint to do so. 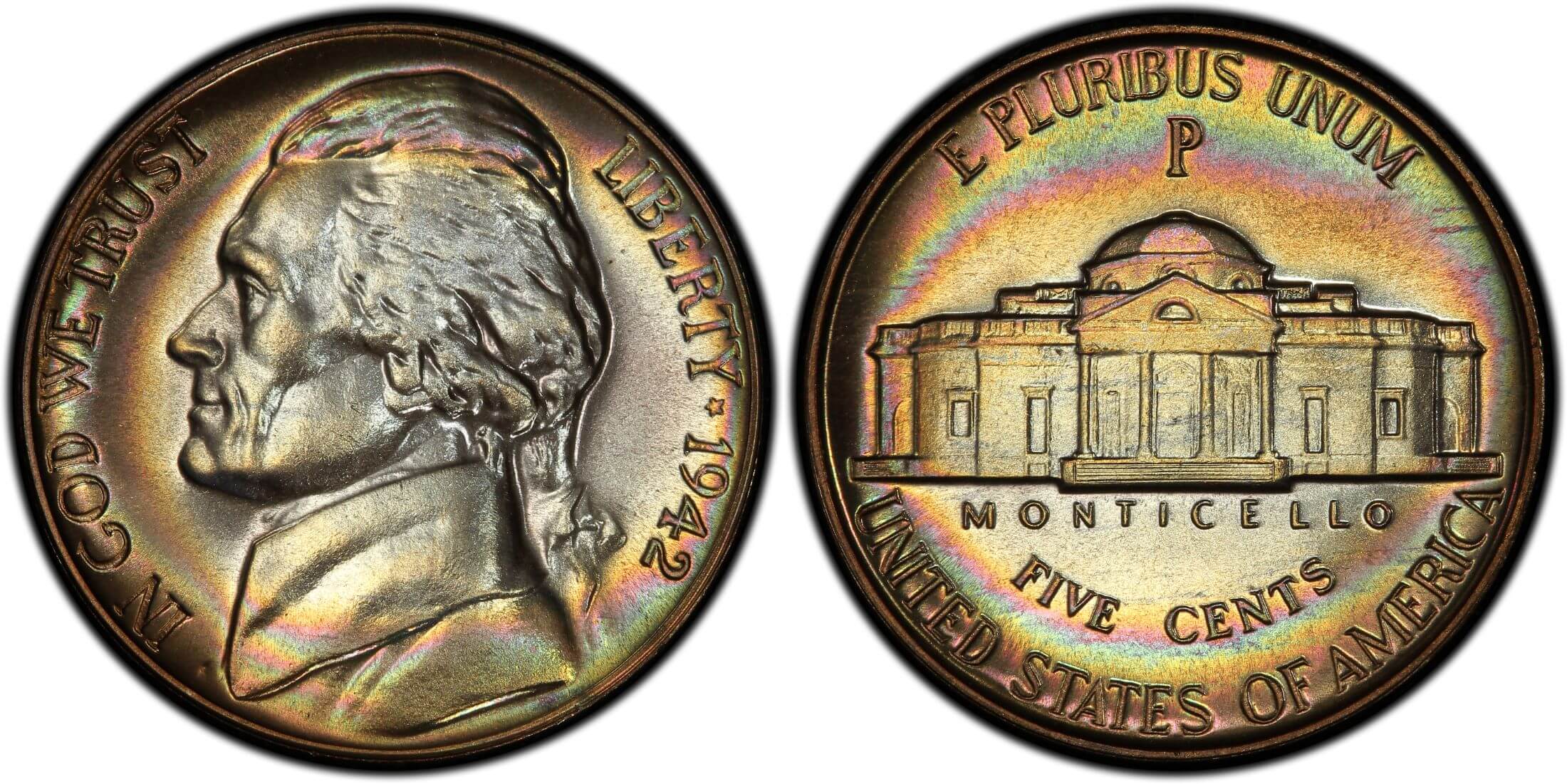 The 35% silver "War Nickel" proof issued in 1942 is worth twice as much as its non-silver counterpart from the same year. 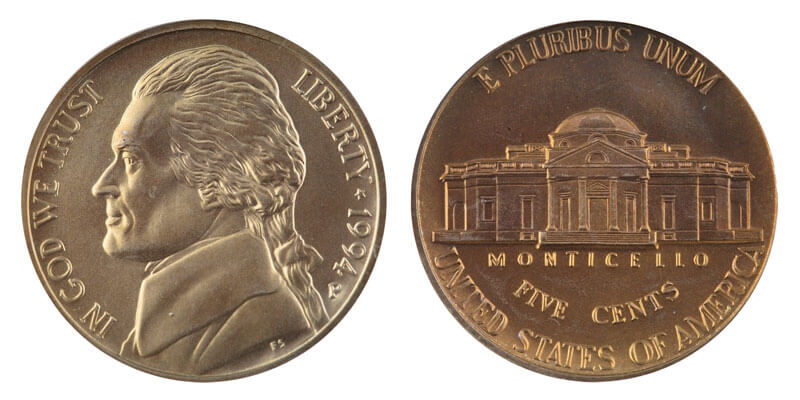 This was the first frosted matte finish coin issued in the Jefferson series.

The finish gives the coin a beautiful matte appearance that is the result of sandblasting. Small sand particles impart a "frosty" look to the surface.

Most proof coins and special mint specimens from the U.S. Mint were produced with a similar style of matte finish before the mid-20th century. 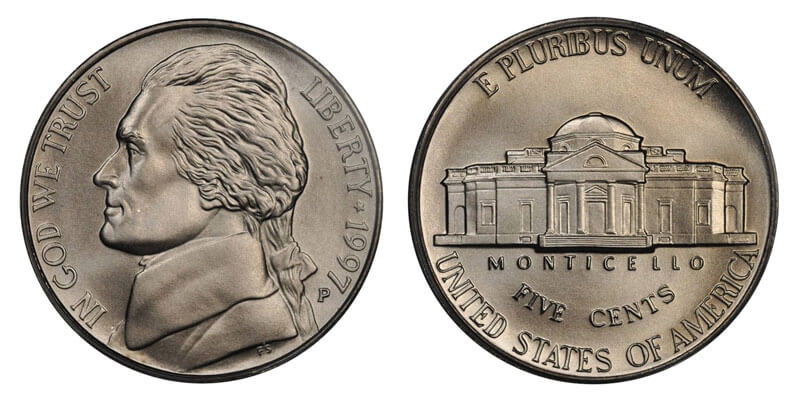 This is the second—and sole other—frosted matte issued in the series. It is often seen in MS69 and even MS70 grades. You'll notice it has a considerably higher value than the 1994 version. 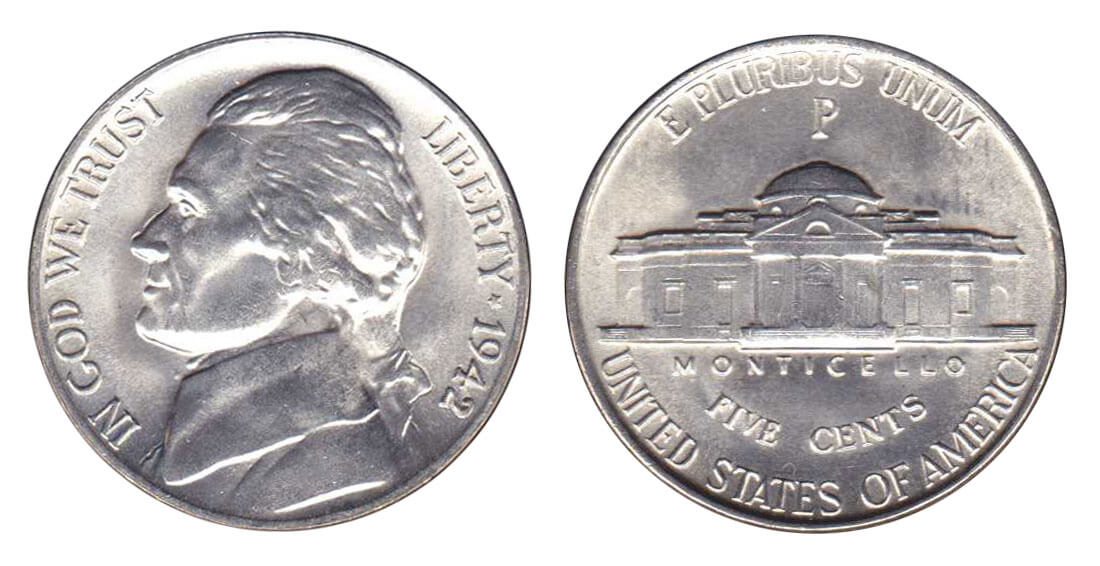 The proof version of the 1942-P Jefferson nickel is distinct from the other early proof coins.

During WWII, nickels were briefly struck from an alloy of 35% silver. Other metals had to be rationed as part of the war mobilization.

These silver "war nickels" are distinguished by the placement of the mintmark above Monticello on the reverse design. Non-silver nickels put the mintmark to the right of the building.

The usual mintmark location was changed beginning in 1968, moving it to the rim of the obverse design.

Each of these coins were pre-war proofs. They were made by the mint prior to the U.S. getting involved in World War II.

At auction, they tend to garner similar prices.

As proofs, only tens of thousands were minted rather than tens of millions. This relative scarcity supports the higher price.

By contrast to the last entry, the 1939-D nickel is a regular circulation issue.

So why is it so valuable? It has the lowest mintage (3,514,000) of any standard-issue within the Jefferson nickel series. You can consider it a "key date" for collectors.

This group includes the earliest proofs in the series. The observation earlier about a much lower original mintage applies.

You can combine these three coins with the 1941 and 1942 issues to make a complete set of pre-war proofs.

There are abundant opportunities for collecting Jefferson nickels.

Most of the high prices on this list relate to rare error coins. Aside from these rarities, the Jefferson nickel series is very affordable and accessible.

You can even kickstart your collection simply by merely sifting through pocket change! It's one of the nice advantages of collecting a modern circulating series. 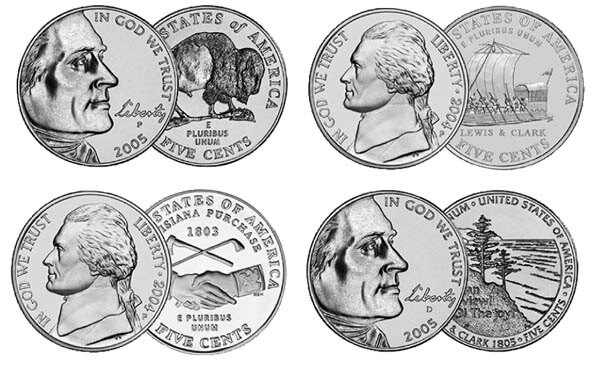 Nickel collectors can also dive into the recent Westward Journey circulating commemorative series. Released from 2004 through 2006, these coins (above) featured the first new designs on the five-cent coin since the Jefferson theme debuted in 1938.

Read more about valuable coins and coin prices from the experts at Gainesville Coins: