As many collectors find, values for 1970s quarters are all over the map. The value of any coin depends on various factors. These include:

When it comes to 1970s quarters, most are made from copper-nickel clad. Those found in circulation are typically worn, meaning that the vast majority of those found in everyday change will be worth only their face value. 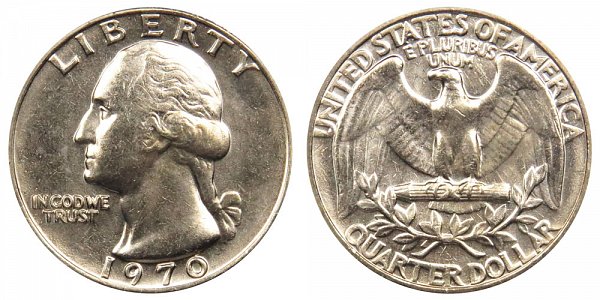 With that said, there are some 1970s quarters that are worth more than their face value.

The Washington quarter was first released in 1932. It features an obverse portrait of George Washington, a Revolutionary War general and our nation’s first president. The Washington quarter was originally designed by John Flanagan and was coupled with a reverse portrait of a heraldic eagle. The quarter was regularly made with a 90% silver composition until 1965, when the coin was switched to a copper-nickel clad format. Some collectible versions of the quarter have been struck with silver in the years since.

With the exception of the 1976 Bicentennial quarter featuring “1776-1976” dual dating on the obverse and a special commemorative reverse with a colonial drummer boy on the reverse, the Washington quarter retained its original design through 1998. The first of the 50 State Quarters was released in 1999, altering the landscape of the Washington quarter to this day. 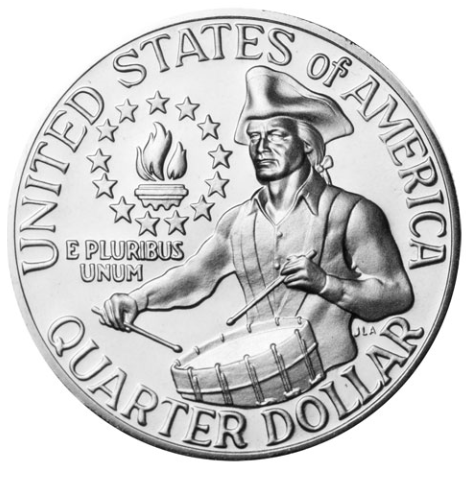 Reverse design of the Bicentennial quarter

As explained earlier, Washington quarters made for circulation throughout the duration of the 1970s are made from copper-nickel clad. None were struck in 90% silver. However, about nine million of the 1976 Bicentennial quarters struck at the San Francisco Mint and bearing an “S” mintmark were made from a 40% silver composition. These were all struck as collectibles and sold to the public as such. Still, some have been accidentally spent as regular money and found in circulation by eagle-eyed collectors.

The way you can tell a silver Bicentennial quarter apart from a clad one is by first looking for an “S” mintmark. If it doesn’t have an “S” mintmark (it either has a “D” mintmark from Denver or no mintmark) then it’s not a 40% silver quarter. However, any “S” mintmark 1976 quarters you find in circulation should be tested for the presence of silver.

Deciphering clad and 40% silver quarters apart from each other cannot conclusively be done using a scale alone. Only .08 grams separate the standard weights of a clad quarter (5.67 grams) and 40% silver quarter (5.75 grams), and the tolerance for a quarter is .22 grams, up or down. Another way to determine if you have a 1976 silver or clad quarter is to look for the presence of an orange or brown band around the edge of the coin. This indicates an internal copper core to which the copper-nickel outer layers are bonded.

You can also have your quarters tested for their metallic content by a coin dealer or other numismatic professional in possession of metallurgical testing equipment. Bear in mind that sometimes these tests will come with a fee.

While a clad 1976 quarter is worth face value if worn, a 1976 silver Bicentennial quarter can be worth about $1.50 to $2, regardless of its grade, when silver trades around $20 per ounce.

1970s Quarters with Varieties or Errors

While the vast majority of Washington quarters are made to U.S. Mint specifications, some do contain errors or varieties. These can be worth some serious change.

The most notable 1970s quarter errors are the 1974 and 1977 quarters that were accidentally struck on 40% silver clad planchets. These transitional errors are very rare and valuable, generally selling for more than $1,000 each.

Other kinds of errors that can be found on 1970s quarters are: 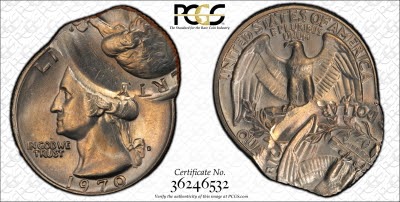 Example of a die cud error on a 1970 quarter

If You Have 1970s Quarters Worth Money

You can either keep your 1970s quarters and add them to your collection or you could sell them. Whatever you do, don’t clean them or try to improve their appearance by attempting to enhance them in any way. Both collectors and dealers prefer coins in their original state. You will dramatically lower the value of your coins by cleaning them, so you’re best to leave them in exactly the condition you found them. If you choose to sell your coins, be sure you take them to a coin dealer.

Why choose a coin dealer when there are so many pawn shops and jewelers around town? Let’s look at it this way. . . You wouldn’t go to the car dealer to sell a golf cart, would you? Would you consider taking your cat to the pediatrician for a checkup?

Everybody has their realm of expertise. The pawn shop might be the perfect place to sell your old lawn mower, and the jeweler will probably give you the best price on that old heart pendant.

As for your old coins? Neither the pawn shop or jeweler will do—but those are things about which your nearest coin dealer knows a thing or two! And they’ll offer you the best price, to boot.

Many coin dealers are fair and honest businesspersons who simply want to do a good job in their profession and provide their customers with decent service. But some are better than others, and unfortunately a few are simply unscrupulous sorts looking to take you (and your money) for a ride. Doing a bit of homework will help you find a good coin dealer who will pay a fair price for your 1970s quarters.

Choose a coin dealer who has many years of experience and pledges to offer satisfactory service. Some of the best coin dealers have many affiliations with the industry’s best organizations, including the National Coin and Bullion Association, National Inflation Association, Professional Coin Grading Service, and Numismatic Guaranty Company. Reputable, well-connected coin dealers who will do everything they can to make sure you’re satisfied with their service, whether selling or buying 1970s Washington quarters, is the kind of coin dealer you want to be working with!

Read more about coin values from the numismatic experts at Gainesville Coins: