Canadian Quarters Worth Money: From 1870 To Today

Canadian Quarters Worth Money: From 1870 To Today

There are several rare Canadian quarters that are worth money. Early Canadian 25-cent pieces, such as many Queen Victoria Canadian quarters, mainly derive their value from their rarity and historical significance. Even a fairly worn Victoria or Edward VII Canadian quarter can be worth hundreds of dollars, depending on the date.

Nova Scotia, New Brunswick, Quebec, and Ontario were joined together as the Dominion of Canada in 1867. The first coins for a United Canada arrived from the British Royal Mint in 1870. The new Canadian coins were identical in weight, size, and purity to British coins. Their reverse design included "CANADA" in the inscriptions. Until this time, Canadians had been using a mixture of British, American, and provincial notes and coins. 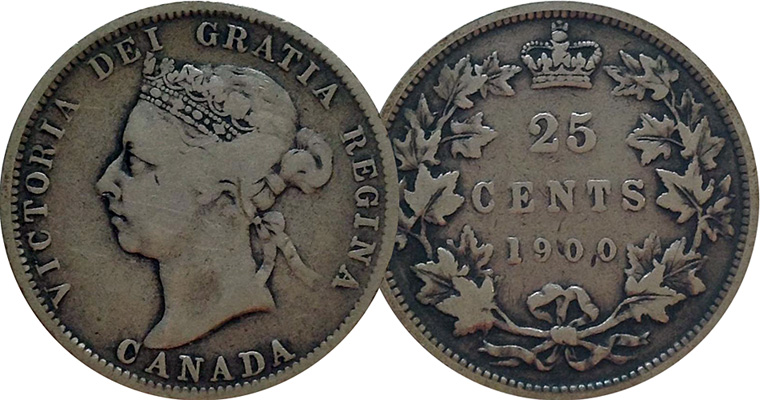 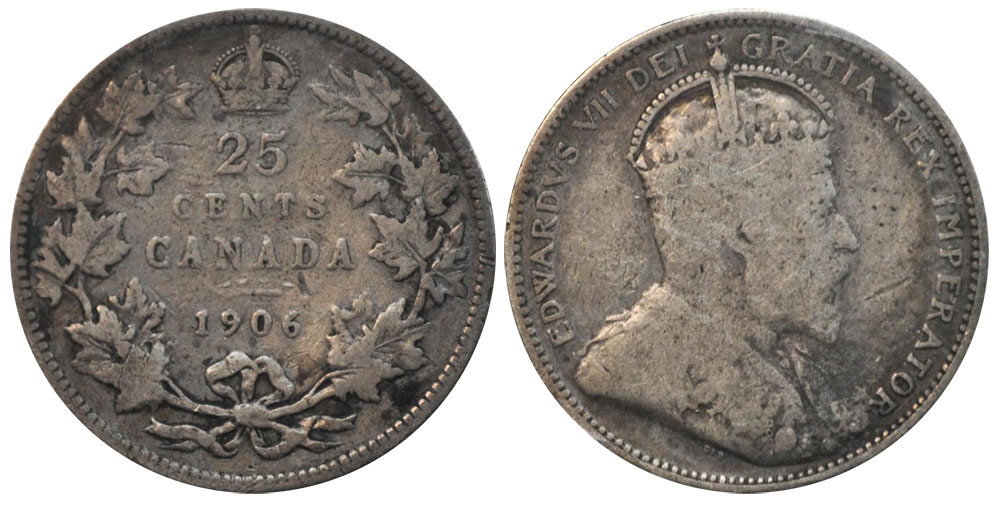 The 1906 "Small Crown" Canadian quarter is an error coin that resulted from the use of old reverse dies for part of the year. It's much like "small date" and "large date" varieties of other valuable coins. The crown on the reverse of the Canadian quarter was slightly enlarged in 1906.

Part of the 1906 mintage used old leftover dies that had the smaller crown. The difference in the size of the two crowns is so slight, that no one noticed the mistake until the 1980s.

King George V reigned from 1911 until 1936. Government debts incurred during World War I led to the reduction in purity for silver coins across the Empire from .925 fine (sterling) to .800 fine (80% purity) in 1920. This included Canadian coins for circulation.

Two of the most famous George V Canadian quarters are the 1911 "Godless" coin, and the 1936 "Dot" quarter. Each are highly sought after in good condition.

Edward VII passed away in May 1910. As was customary, coins continued to be minted with his image until the end of the year. In 1911, new coin dies arrived at the Canadian branch of the Royal Mint in Ottawa. Someone had changed the previous royal inscription from "DEI GRATIA REX IMPERATOR" used for the late Edward to "REX ET IND IMP" in order to space out the words.

Canadians immediately noticed that "Dei Gratia" (by the Grace of God) was MISSING from all their 1911 coins. (Curiously enough, British and Australian coins struck in 1911 retained the mention of God, even though their inscriptions were longer than the Canadian one.) This caused a scandal that was corrected for the 1912 issue.

The 1936 "Dot" Quarter is another famous Canada numismatic rarity. George V passed away in January 1936. His oldest son ascended the throne as Edward VIII. Soon after becoming king, the former playboy prince announced that he would marry his lover Wallis Simpson, an American in the process of divorcing her second husband.

The constitutional crisis that erupted nearly tore the British government apart. It almost cost the Crown the loyalty of all four Dominions of the Commonwealth. The leaders of Canada, South Africa, Australia, and New Zealand joined the British Cabinet in condemning Edward's proposed marriage in the strongest terms.

As a result, minting of new coins bearing Edward's image were delayed. By the time of Edward's abdication in December 1936, there was no possibility of getting coin dies of the new king, George VI, prepared in time.

The solution in Canada was to continue using the 1936 George V dies, but with a dot under the date to signify that the coin was actually struck in 1937. This made known examples of the 1936 "Dot" coins instant collector's pieces.

Where Are The Rare Modern Canadian Quarters?

There are two reasons that very few modern Canadian quarters are worth money. The first is advances in minting technology that means coin dies last longer without degrading. The second reason is the massive numbers of Canadian quarters that are minted every year compared to low mintage totals earlier in the 20th century.

Mintages of Canadian quarters exploded after the Great Depression. From 1937 to 1952, an average of 14.4 million George VI Canadian quarters were struck annually. Since then, mintages have dramatically increased.

Even with world-leading technology, when you're striking 100 million quarters a year, something will happen. These "error coins" are by and large the only rare coins produced.

From 1937 to 1952, British and Commonwealth coins featured the portrait of George VI. The first Canadian quarter to bear his likeness was the 1937 quarter. This quarter also introduced a uniquely Canadian design of a Caribou for the reverse and new lettering for "25 cents."

India achieved its independence from the British Empire on August 15, 1947. The agreement between the Indian leaders and the British government granting independence wasn't reached until June of that year.

At the time, no one knew if the negotiations would succeed or not. So there were no dies removing the IMP IND (Emperor of India) from George VI's titles for the Canadian quarter.

In a "yes, we know he isn't Emperor of India any more, please bear with us" move, the Royal Canadian Mint stamped a little maple leaf behind the 1947 date on George VI quarters made late in the year. After some time in the coining press, grease began to fill the maple leaf privy mark. This led to an indistinct "dot" being struck on very few quarters.

Canadian quarters have borne the image of Elizabeth II since 1953. In this time, the Royal Canadian Mint has become a world leader in colorized and commemorative circulating coins. This gives the casual Canadian coin collector opportunities to find beautiful limited-edition coins in their pocket change.

Circulated common date Elizabeth II quarters are only worth their face value. The most valuable circulated (XF40) Elizabeth II Canadian quarters are the 1973 "Large Bust" Mountie ($143), the 1955 "Double Die" ($97), and the 1992 Northwest Territories quarter with the reverse rotated 90 degrees ($95).

Who's That Girl (Queen)?

Canada has used their own version of the profile of Queen Elizabeth II for the obverse side of its coins since 1990. While the UK and other Commonwealth countries were using the Raphael Maklouf portrait, Canada was using a similar design by Doris de Pedery-Hunt.

Susanna Blunt's image of the Queen has appeared on Canadian coins since 2003. The United Kingdom used Ian Rank-Broadley's portrait from 1998 to 2015, and Jody Clark's image since then. Australia switched to the Clark effigy in 2019.

Rising silver prices in the 1960s led nearly all nations to stop making silver coins. Australia had struck their last silver coins in 1964. The US had stopped making silver quarters and dimes in 1964. (Purity of half dollars would fall from 90% to 40% silver in 1965, and be struck in cupro-nickel clad after 1970.)

Canada had been making coins in .800 fine (80% purity) since 1920, when it switched from sterling silver (.925 fine with 7.5% copper). By 1967, it was obvious that most people were hoarding coins for their silver content, which was worth more than their face value. This was leading to a coin shortage, just as it had in the United States.

The Canadian government decided to cut the silver content of the 1967 quarter from 80% to 50% in the middle of the year. This brought the Actual Silver Weight (ASW) of the quarter from 0.150 troy ounce down to 0.0937 troy ounce. This might not seem too important, but $20 worth of 50% silver quarters has 4.5 troy oz LESS silver value (melt value) than $20 worth of 80% silver! 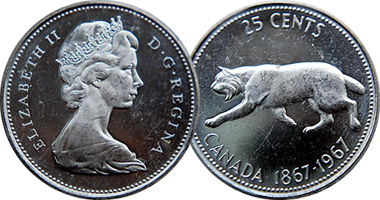 Even today, bullion dealers will refuse to buy 1967 Canadian quarters as "junk silver". There is no way to tell how much silver is in any one 1967 quarter.

The new quarter composition lasted less than a year. Halfway through the following year in 1968, silver was removed from the Canadian quarter completely. The new clad coin had the same dimensions as the .500 fine silver coin (and the .800 fine before that), but it weighed only 5.06 grams compared to the previous 5.83 grams.

Interested in Canadian silver coins for sale? Check out our product listings by following the link!

A Note About Coin Grades

Coins are graded on a 70-point system. This ranges from "Poor" PR1, which is so worn away that it can hardly be identified, to "Mint State" MS70, which is a perfect coin, even when viewed under a 5x magnifying glass. Several factors such as toning and eye appeal also contribute to the grade (and thus a coin's value).

The coin values provided herein are taken from recent price guide books and past results sold at auction from the Heritage Auctions website and eBay listings.

Below are the top five most valuable Canadian quarters. They are divided into circulated and uncirculated (mint state) grades.

More articles about buying and collecting coins from the experts at Gainesville Coins:

7 Benefits of Investing in Precious Metals