By Everett Millman
Published: January 05, 2021
Updated: January 24, 2023
Table Of Contents:
Table Of Contents:
Link copied to clipboard.
The Half Union was a proposed gold coin denomination with a face value of fifty dollars. It was never officially adopted for U.S. currency, but the proposal did result in the production of two patterns (i.e. trial pieces) in 1877. These remain the largest gold coins ever struck by the United States government. 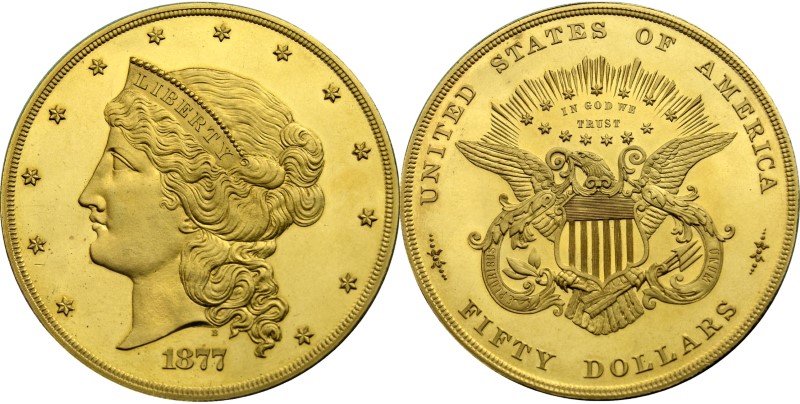 The gold Half Union pattern is officially known as J-1548 in reference books. Image: Smithsonian Institution

This story contains two fascinating subplots: one about money and economics in the late 19th century, and another about small-scale graft among government officials. You can also find our [podcast episode](/podcast/half-union-50-dollar-gold-coin-never-heard-of) about this topic by following the link. ##Why the Half Union Was Proposed##

Summary: Due to the widespread use of gold for commerce in America's western territories during the middle of the 19th century, a larger size of gold coin was considered.

The California Gold Rush of 1849 profoundly transformed the United States. It greatly increased the amount of gold in the country. Under the gold standard, this meant that the amount of money and wealth in the U.S. also grew. Moreover, the Gold Rush accelerated the pace of settlement and development in the American West. Very little infrastructure existed in the region in the mid-19th century nonetheless. It was truly still frontier country at the time. The West was also chronically short of gold coinage. This was exacerbated by the pervasive lack of trust in paper money. At the time, unregulated "wildcat banks" were springing up across the country. Paper notes from these banks would only be accepted at a steep discount to their face value, if they were accepted as payment at all. Since only gold was trusted for commerce, a larger denomination gold coin would allow merchants and banks to transfer large sums of money more efficiently. Even the establishment of a new U.S. Mint branch in San Francisco in 1854 didn't alleviate the problem. In response many privately-issued gold tokens were distributed throughout the 1850s. Between the unreliability of wildcat banks and the use of privately-minted gold, you can get a glimpse of how different the economic landscape was back then. We must also consider the cost and logistics of shipping gold back and forth between commercial centers on the east coast and the western states and territories. One obvious solution would be a larger legal tender gold coin. In a bill introduced by California Senator William Gwin in 1854, each Half Union coin theoretically would have contained nearly 2.5 troy ounces of pure gold content. This would allow the new denomination to remain proportional in metal value to existing U.S. coinage. It was to measure nearly 51 mm in diameter. The larger coin would provide a trusted way to facilitate smoother trade and transactions. 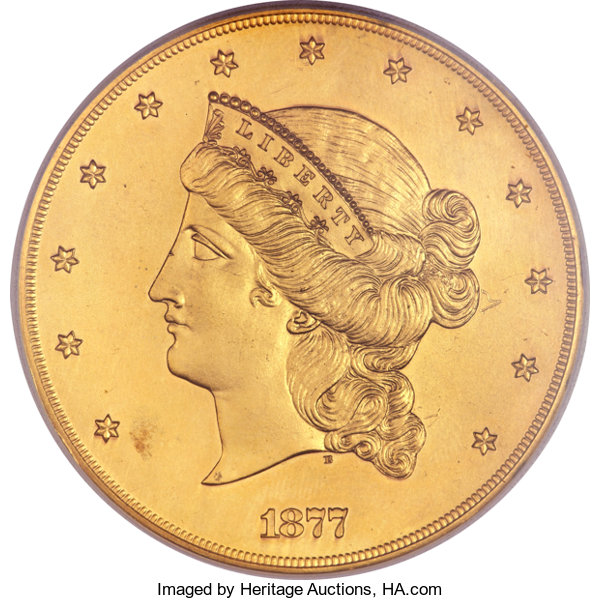 Liberty head design on the obverse of the 1877 Half Union coin. Image: Heritage Auctions

Ultimately, Congress rejected the bill authorizing the new coin. The proposal passed in the Senate but was rejected by the House of Representatives. It was seen as a regional issue, unimportant to political and economic interests back east. ##The Mint Reconsiders the Idea##

Summary: Profit-driven employees at the United States Mint revived the idea of a $50 gold coin in the late 19th century.

20 years after its initial proposal, the idea of the Half Union was revived by Robert Linderman, the Director of the U.S. Mint. By then, federally-issued paper money (known as "greenbacks") were widely available. The need for larger gold coinage had mostly abated, making the $50 Half Union moot. Many called it [Linderman's "pet project."](https://coins.ha.com/itm/patterns/1877-50-fifty-dollar-judd-1549a-gilt-pollock-1722-low-r7-pr63-pcgs-secure/a/1209-3583.s) His motives for revisiting the $50 denomination coin may not have been entirely pure, however. Linderman had something in common with the former Mint superintendent, James Ross Snowden. (He was the uncle of American diplomat Archibald Loudon Snowden.) Both men were notorious for selling unauthorized pieces to dealers, collectors, and members of Congress. They could then pocket the money for themselves. Such mixing of mint operations with private enterprise had been an issue since at least the dismissal of a Chief Coiner, [Franklin Peale](https://en.wikipedia.org/wiki/Franklin_Peale#Downfall), in 1854. This type of practice was certainly against the law, but the regulations against it weren't strictly enforced until 1887. Chief Engraver Charles Barber (son of his predecessor, William Barber) created the design for the Half Union coin. Barber adopted a very similar motif for Lady Liberty facing left as had been used for the $20 double eagle coin, which was designed by a former chief engraver, the late James Longacre. The reverse featured an heraldic eagle and thirteen stars. Just two pattern coins—trial strikes of proposed new designs—were made of the $50 Half Union. The new $50 coins never went into full production. Like today, most of the public was utterly unaware of its existence. In addition to the fifty-dollar gold piece, the mint also drew up plans for an even more ambitious $100 Union coin. Such a denomination was part of the original 1854 legislation. No patterns were ever struck, and only sketches made by Assistant Engraver George Morgan survived. You will sometimes see replicas based on Morgan's $100 Union design on privately-minted novelties today. About a dozen copper examples of the Half Union were also made in 1877, however. They were distributed ("under the table" of course) among collectors close to Linderman and Snowden. Due to their rarity and oddity, these copper Half Union patterns still sell for hundreds of thousands of dollars to this day. Perhaps half of them are gilt, i.e. gilded in a thin layer of gold. These were among many U.S. pattern coins catalogued by numismatist J. Hewitt Judd. The copper Half Union varieties are classified by the abbreviation Judd-1549, or J-1549. ##The Legacy of the $50 Half Union##

Summary: The $50 Half Union gold coin idea never made it past the proposal stage, but it is still admired today.

The only two extant patterns of the Half Union made of 90% gold currently reside at the Smithsonian Institution in the museum's National Numismatic Collection. They are the property of the government and not legal to own. (More on that below.) Modern replicas of the coin called half union tribute proofs have been made, but they don't quite capture the artistic skill and beauty of the original 19th-century design. If you could own one, the Half Union would have ridiculous collectible value due to the rarity of just two patterns existing. The path these coins took to becoming illegal for private ownership was an interesting precursor to the saga with the [1933 Saint-Gaudens double eagle](/podcast/most-controversial-gold-coin). In the early 1900s, the Half Union patterns were not in the custody of the U.S. Mint. They were in the possession of a high-end collector, William Woodin. Woodin would later become Treasury Secretary in 1933. His connections to the Treasury Department no doubt aided in his acquisition of the coins. Eventually, the mint [strongly advised Woodin to return the patterns](https://www.pcgs.com/coinfacts/coin/1877-50-j-1546/61890#sectionNarrative); he did so, but only in exchange for several other rare coins from the Mint Cabinet! 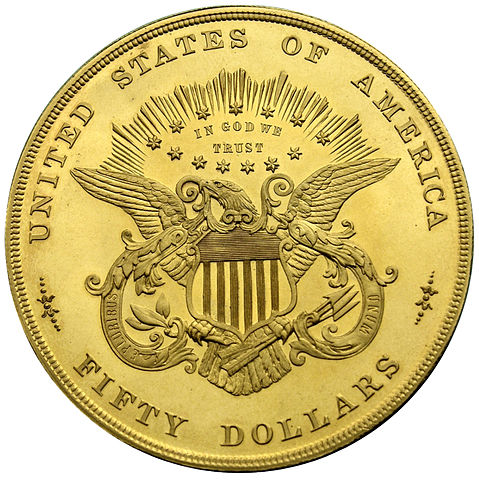 Interestingly, the $50 denomination was later featured on commemorative coins. (Keep in mind, commemeratives are not intended as circulating money.) The best-known among these is the 1915 Panama Pacific commemorative half union, which was made in both round and octagonal (eight-sided) shapes. If a coin with such specifications was issued today, it would be equivalent to approximately $4,750 in terms of melt value! ##Buying $50 Gold Coins## The closest analog to the Half Union is today's bullion coins. These related products are IRA approved. Interestingly, there are two modern U.S. gold coins that carry the $50 denomination. The modern 1 oz [American Eagle](/category/14/buy-gold-eagle-coins) gold bullion coins and the 1 oz [American Gold Buffalo coins](/category/10/gold-buffalos) also carry a $50 face value, though their intrinsic value is far higher. Bullion coins are not intended for circulation, either, so they aren't classified under the "half union" denomination. Although you can't legally own a $50 gold Half Union coin, [modern gold bullion coins](/category/2258/gold-coins) are your next-best option. Your purchase price will be locked in once you complete the checkout process. You can buy gold from Gainesville Coins with check, credit card, bank wire, and cryptocurrency. We carry mint rolls of 20 coins and "Monster Boxes" of 500 coins for bulk purchases. Every package is shipped discreetly and fully insured. Shop for $50 gold coins below, and please contact us at (813) 482-9300 with any questions regarding an order or our available inventory: ###American Gold Eagle Product Details### The American Gold Eagle coin series was first released in 1986. These coins are struck at the West Point Mint in New York from .9167 fine gold (a purity of 91.67% gold), which is also known as 22-karat gold. This stands out from the traditional 90% pure gold used for the Half Union, or the .9999 fine gold used for the American Buffalo gold coins. The rest of the 22 karat alloy is made up of 5.33% copper and 3% silver. 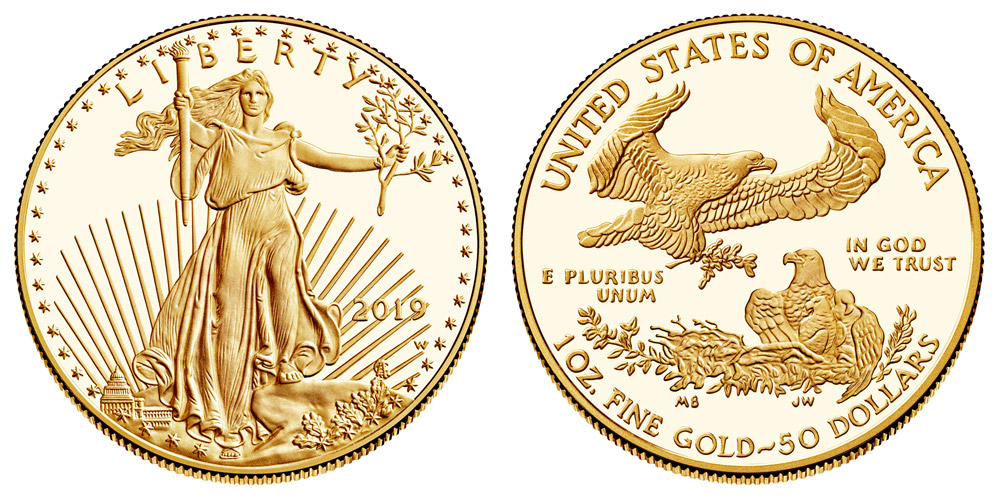 The Type 1 design of the 1 oz American Gold Eagle.

Including the silver and copper, each $50 Gold Eagle has a gross weight of 1.0909 troy oz (33.93 grams). The actual gold weight (AGW) is 1 troy oz. In terms of size, the coin measures 32.7 mm in diameter and 2.87 mm thick. Proof editions of the coin are available for collectors, while the standard bullion versions uses a Brilliant Uncirculated finish. The obverse design was created by renowned sculptor Augustus Saint-Gaudens. Lady Liberty is shown with flowing hair, carrying an olive branch in her left hand and a burning torch in her right hand. The U.S. Capitol Building is seen in the distance. The year-date is near the bottom of the design, expressed in Roman numerals on older versions of the coin prior to 1992. The new Type 2 reverse design shows a close-up image of a bald eagle. Up until 2021, the reverse depicted a family of eagles as created by artist Miley Busiek. A female eagle sits in the nest containing her young eaglets. We see the male eagle clasping an olive branch, flying to meet them. Inscriptions include "IN GOD WE TRUST" and "E PLURIBUS UNUM."
Posted In: blog