A Concise History of the Morgan Silver Dollar

A Concise History of the Morgan Silver Dollar

The Morgan silver dollar is the most popular American coin to collect. This is in stark contrast to the reception it received when it was introduced in 1878. This is the story of how an unwanted and unnecessary big silver coin became the star of modern coin collecting.

Why The Morgan Dollar Was Made

The story of the Morgan dollar begins with the Coinage Act of 1873. Cheap money advocates and silver mining interests preferred to call it “The Crime of 1873.”

Among other things, the Act ordered the US Mint to stop making silver dollars. This removed a profit-making loophole for silver miners. When silver was selling for less than $1.29 an ounce, they could get their silver made into silver dollars at the US Mint for instant profit.

By the mid-1870s, farmers and small businessmen began banding together to protest for a return to bimetallism. They advocated for unlimited coinage of silver dollars (called "free silver"). This coalition for expansionary monetary policy became known as the Populists.

Politicians of the silver mining states made common cause with the Populists to push Congress to reauthorize silver dollars. The result was the 1878 Bland-Allison Act. 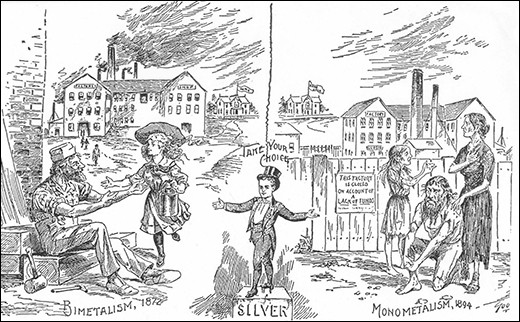 19th-century political cartoon commenting on the virtues of bimetallism, a dual standard where money was backed by both gold and silver. Image: Lumen Learning.

People were still not allowed to present unlimited amounts of silver to the US Mint to be made into dollars. Instead, the Bland-Allison Act directed the Secretary of the Treasury to purchase between $2 million and $4 million worth of silver at market prices every month, to be minted only into silver dollars.

The Inception of the Morgan Dollar

The US Mint took this opportunity to replace the 1840 Seated Liberty silver dollar design. The task fell to the US Mint's assistant engraver, George T. Morgan.

A young school teacher named Anna Williams posed for Morgan's obverse design of Lady Liberty for his silver dollar. He changed her appearance on the coin to appear middle-aged. This kept with the tradition of depicting a motherly Lady Liberty on the nation's coins.

Side profile of Anna Willess Williams, the model for the Morgan silver dollar.

First Impressions of the Morgan Dollar

The design of the Morgan Dollar met with a positive reception by some (especially in the Treasury Department). Yet the coin was roundly derided by others, who felt the coin was “tainted” by the pork barrel law that had given it birth.

Detractors called it “the Bland Dollar,” in a play on words with the name of the Act’s principal architect, as well as a commentary on the design. Others who thought the eagle was too scrawny nicknamed the coin the “Buzzard dollar.”

Disappointed that the government was only buying the bare minimum of silver each month, the Populists and mining interests agitated in the late 1880s for a better deal. The result was the 1890 Sherman Silver Purchase Act.

Instead of being mandated to buy a certain dollar amount of silver each month, The Sherman Silver Purchase Act forced the government to buy 4.5 million ounces (154 tons) of silver each month. The silver was paid for with special Treasury "coin notes" that could be redeemed in coin.

Silver prices fell to record lows in the 1890s, but the amount of silver in the nation's coins remained the same. As a result, people redeemed the millions of dollars of paper coin notes every month for gold coins instead of silver.

This drained the gold reserves of the United States to crisis levels. It also spread doubt about the government's ability to pay its debts (which had to be settled in gold). This was a major cause of the Panic of 1893, and the end of the Gilded Age.

Called into special session by President Cleveland, Congress repealed the Sherman Silver Purchase Act in late 1893. The repeal stopped the issuance of Treasury coin notes, which curtailed the outflow of gold from the nation's reserves.

The Last of the Sherman Silver Morgans

After the 1893 repeal of the Sherman Silver Purchase Act, silver miners were terrified that the government would dump the remaining tons of silver on the open market, crashing silver prices. Congressmen from the silver mining states managed to squeeze a clause into an 1898 funding bill which forced the Mint to turn all remaining Sherman Purchase silver bullion into silver dollars.

The last of the Sherman Purchase Act silver was exhausted in 1904, and Morgan dollar production ended. Or so everyone thought.

In 1918, the British Empire was facing a shortage of silver to back its notes circulating in India, a major supplier of their war goods. The only place to get enough above-ground silver to cover this deficit before riots broke out was to buy it from the United States.

Piles of Morgan dollars were melted down following the First World War.

The Pittman Act of 1918 authorized the melting of up to 350 million Morgan dollars, with the bullion sold to the UK at $1 per ounce. Politicians from the silver mining states refused to vote for the bill unless the government was required to replace every silver dollar melted at the same $1/oz.

About 270 million Morgan dollars were melted under the Pittman Act. This was approximately 47% of all Morgan dollars minted between 1878 and 1904. This explains the low surviving numbers of some dates that had high mintages.

It was May 1920 before silver prices retreated from wartime highs. Silver miners then lined up at the Treasury Department to take advantage of the $1 price guarantee. By the end of the year, the US Mint had millions of ounces of silver bullion filling its vaults.

Why Did The Morgan Dollar Return in 1921?

Why was the Morgan dollar minted in 1921? A new silver dollar design celebrating the end of World War One was supposed to be ready in 1921. Called the Peace dollar, delays in finalizing the design meant that the dies were not ready until December.

In the meantime, the Mint had to turn the millions of ounces of silver that was piling up into dollars. Bullion was dead weight on the government's balance sheet. Minting it into silver dollars allowed more silver certificates to be put into circulation. So, Morgan dollars were struck for one last year.

The Popularity of the Morgan Dollar

Few people collected Morgan dollars until the discovery of many rare dates in the second half of the 20th century. Rising silver prices led people to convert silver certificates for Morgan dollars. The public (correctly) speculated that their silver content would soon be worth more than their face value.

As older bank bags of Morgan dollars were unsealed to meet redemptions, several rare and scarce dates appeared. Press coverage of these finds had people nationwide running to redeem silver certificates. This culminated in a rush on the US Treasury Department in Washington, DC, where most of the remaining millions of Morgan dollars were housed.

There were only about 3 million Morgan dollars left in the back of the vaults when the government stopped redeeming them at face value. The government's General Services Administration (GSA) was tasked with sorting the remainder and auctioning them to the public.

These "GSA Morgan Dollars" were mostly from the "Old West" US Mint at Carson City, Nevada. Their nearly uncirculated condition made them extremely valuable.

The GSA auctions were winding down when the first major private hoard of Morgan dollars was found—the Redfield Hoard.

Millionaire recluse Levere Redfield had accumulated more than 400,000 silver dollars by his death in 1974. Distrusting banks, he would exchange paper money for $1,000 canvas bags of silver dollars. He wasn't a collector, but a hoarder. Even so, many scarce and rare dates were discovered in those bags.

The Redfield Hoard was auctioned off for $7.3 million. The coins were sold in special holders, much like the GSA dollars. By this time, Morgan dollar collecting had become firmly established.

Hoards of Morgan dollars are still found today, usually when someone who lived through the Great Depression dies. Rare and attractive Morgan dollars also find their way to market when a famous collector sells his collection, or in estate sales of rich collectors.

The release of the 100th anniversary 1921–2021 Morgan dollar by the US Mint, commemorating its last year of issue, has brought the vintage silver dollar back into the news.

If this story has you interested in collecting Morgan Dollar, a great place to start is our collector's guide.

The History of Silver: Timeline & Infographic