Kennedy half dollars hit circulation in March 1964. It was just months after President John F. Kennedy was assassinated in Dallas, Texas on November 22, 1963.

The coins were saved by the millions upon their release by the public mourning a slain leader. The Kennedy half dollar remains one of the most widely recognized and collected coins around.

The 1964 Kennedy half dollar is the only regular-issue coin in the series made of 90% silver.

People still save Kennedy half dollars today, often believing that they’re rare and special coins. However, only a handful of issues and varieties really hold any significant premium above face value or silver prices. The Kennedy half dollar is one of the few major United States coin series without a key date of significant rarity.

However, if numismatists were to identify one, it would be the 1970-D. This was the last of the 40% silver Kennedy half dollars. They were struck during the production era of circulating silver coinage and included only in uncirculated sets. It is also the only regular-issue coin of note in the series, with the others highlighted in this article all serving as varieties.

The values listed below are for typical examples with no signs of cleaning, holes, heavy nicks and scratches, or other damage.

Coin values for the rest of the series are listed below.

Congress passed a bill authorizing the new coin on December 30, 1963. Work on the design had already been authorized by Mint Director Eva Adams in November.

The obverse of the Kennedy half dollar was designed by U.S. Mint Chief Engraver Gilroy Roberts. The reverse is the work of Frank Gasparro, the man who is also behind the Lincoln Memorial cent, Eisenhower dollar, and Susan B. Anthony dollar. Gasparro replaced Roberts as Chief Engraver in 1965.

The reverse design is very similar to the presidential seal. The effigy of Kennedy was adapted from his presidential medal. It replaced the portrait of Benjamin Franklin used for the Franklin half dollar (1948–1963). The coin measures 30.6 mm in diameter and 2.15 mm thick.

The half dollar was once prevalent in circulation and normal, day-to-day transactions. By the early 1980s, the 50¢ coin became a rare sighting in daily commerce.

Lessening use of the half dollar also led to a major decrease in mintages. Kennedy halves regularly fell below 100 million at any single mint during any given year after 1976. Mintages were under 60 million by 1980 and fewer than 30 million by 1983. The United States Mint stopped making Kennedy half dollars for circulation beginning in 2002. It still produces business strikes for collectors, though.

All coin series include coins that exhibit off-center errors, clips, or other strike anomalies. But the Kennedy series also boasts a bevy of interesting and highly collectible varieties.

These rare coins were introduced in the price guides above and will be examined in closer detail here.

Numismatists believe this version of the 1964 proof Kennedy half dollar is the first to have been struck. President Kennedy’s wife, Jacqueline, felt the hair detail was too strong on this variety. She requested a softening of the hairlines, which is how most 1964 Kennedy half dollars were produced.

On the Heavily Accented Hair variety, the hair stands over Kennedy’s right ear are particularly pronounced. Moreover, the lower left serif of the letter “I” in “LIBERTY” is virtually missing. 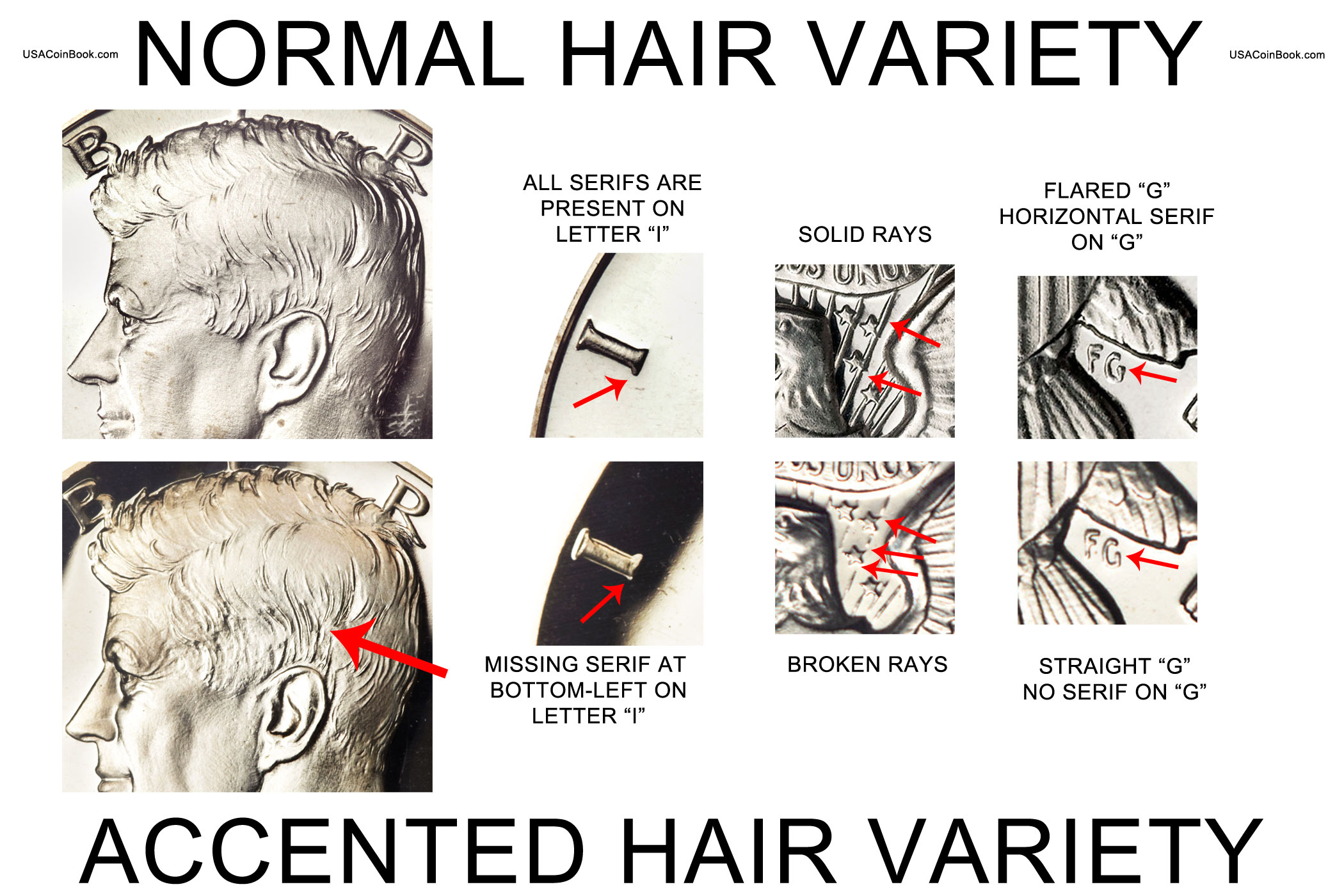 There is no known mintage for the 1964 Heavily Accented Hair half dollar. However, it’s estimated that less than 5% of the entire proof mintage is of this early variety. Of a total mintage of 3,950,762 pieces, 5% is approximately 197,500 pieces. This gives the variety immense collectible value.

The United States Mint ceased making proof sets and uncirculated sets in the mid-1960s. In their place, it offered collectors a distinctive type of coin product. Struck on polished dies and planchets, these coins possessed a finish superior to standard uncirculated coins.

These Special Mint Sets were struck from 1965 through 1967, yielding a few interesting varieties. This included the 1966 SMS Kennedy half dollar missing the "FG" initials of designer Frank Gasparro. The initials are supposed to appear under the eagle's left thigh on the lower-right quadrant of the reverse design. Several other dates in the Kennedy series also exhibit this variety. It shows absolutely no trace of the "FG" initials—inadvertently removed during die polishing.

Another 1966 SMS half dollar variety is this piece from the Philadelphia Mint, which shows doubling in the words “IN GOD WE TRUST” and across much of Kennedy’s profile.

The last of the original-period 40% silver Kennedy half dollars. This piece was issued only in uncirculated sets. It is among the scarcest of the regular-issue, circulation-era strikes. Only 2,150,000 were produced at the Denver Mint.

(We've mentioned 40% silver coins a few times so far. You can read more about how these coins can be tricky, or shop for 40% silver at Gainesville Coins.)

Perhaps the rarest of the no-FG Kennedy half dollars. This 1972-D issue is highly sought after among variety collectors.

Be wary when buying no-FG half dollars. They should also show some strike weakness in other areas of the reverse, particularly in the feather details around the eagle's left leg. 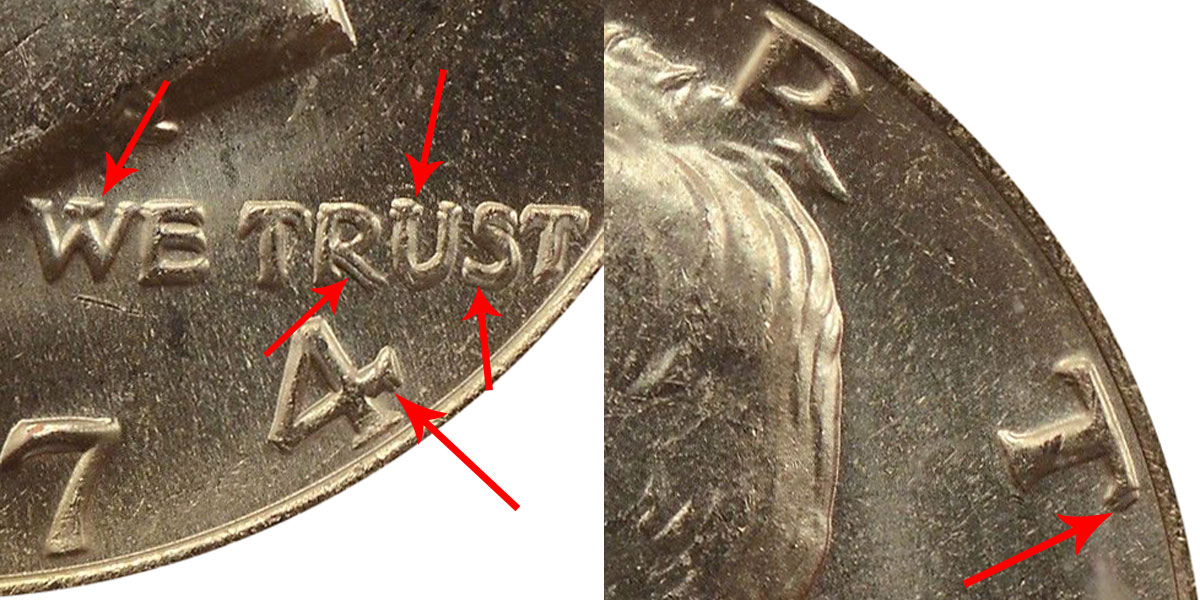 The most significant doubled die of the Kennedy half dollar series is the 1974-D obverse doubled die. It exhibits doubling most heavily in the motto IN GOD WE TRUST. A precise mintage figure for this piece is unknown but perhaps a few thousand examples exist.

Significant changes were made to the “S” mintmark on proof 1979 Kennedy half dollars struck in San Francisco. This resulted in two varieties for the year—a blobby looking “S” mintmark (Type I mintmark) and a more refined “S” with sharper details (Type II). 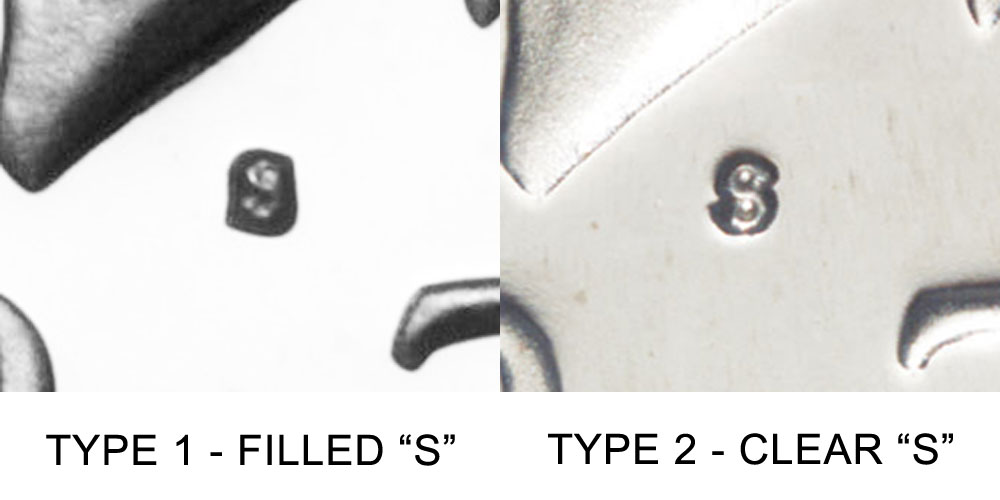 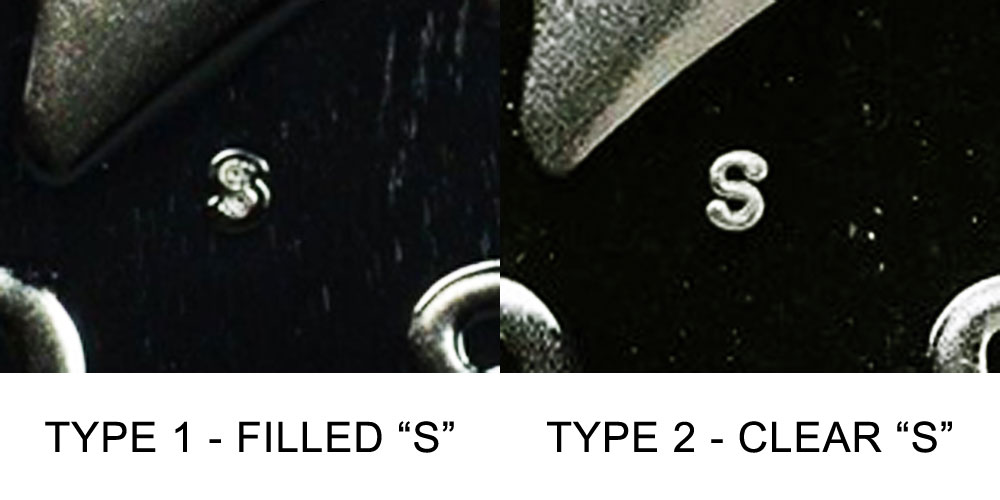 Another major entry among the no-FG Kennedy half dollars. This variety is quite popular and widely collected by series enthusiasts. It’s also much more common than the 1966 SMS and 1972-D no-FG pieces. 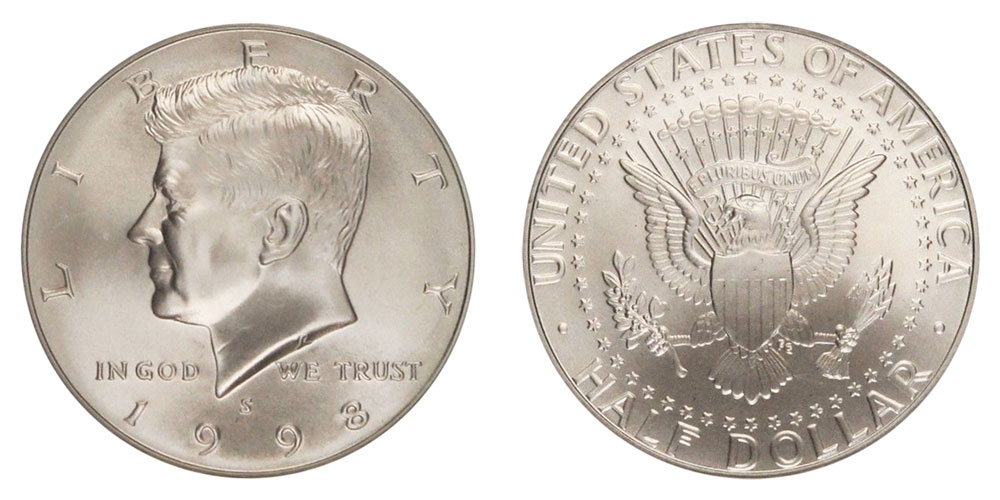 Only 62,000 examples of the 1998-S matte proof half dollar were made. Thus far that is the lowest-mintage non-variety Kennedy half dollar in the series.

While not normally included in a typical run of Kennedy half dollars, this three-quarter ounce 24 karat gold Kennedy half dollar commemorates the 50th anniversary of the first Kennedy half dollar in 1964. It was struck at the West Point Mint in New York to the tune of 73,772 pieces. Its value is largely dependent on the prevailing winds of the gold bullion market.

The Kennedy half dollar series doesn't only appeal to collectors of modern coins. It also attracts those who admire John F. Kennedy and the nostalgic “Camelot” period in American history marked by JFK’s tenure in the White House from 1961 through 1963.

While the series lacks any major key dates or pricey rarities, it is nevertheless a big draw for collectors of high-end coins. Many of the business-strike issues are conditional rarities in grades above MS-66 and especially beyond MS-67.

A complete, basic date-and-mintmark set of business strikes and proofs can be built for less than $2,000. Add varieties and other unusual offerings, including the 2014-W gold half dollar, and the price can quickly approach $7,500 or more.

Those who wish to build a set in the highest-known mint state grades (uncirculated condition) can quickly run their costs into the high five figures. In other words, the sky’s the limit with how challenging one can make the Kennedy half dollar series.

Given the extraordinary popularity and versatility of the Kennedy half dollar series, there are plenty of options for collectors who wish to pursue this set. Completing a collection of Kennedy half dollars offers exciting avenues for everyone. It's also within the financial reach of most collectors. Yet the myriad opportunities for advanced collectors to customize their sets and include premium-quality examples and unusual varieties offer challenges to even the most advanced numismatists.

How Valuable Are Eisenhower Dollars?