What Is a Key Date Coin?

A key date coin is an issue that boasts the lowest mintage in the series or has become the rarest coin in the series. (In this context an "issue" is a year-and-mintmark combination, such as 1916-D.)

The caveat here is that sometimes a coin with the lowest reported mintage may not be the rarest issue. There are numerous “common” coins that are far scarcer today than their same-series counterparts with lower mintages. This may be due to government or private-sector mass melting or other reasons.

Overall rarity is one factor in determining a key coin, but there is another crucial metric: value. A key coin is usually, by definition of being the rarest coin, also the priciest to obtain. However, in practice, the “rule” that the rarest coin is also the most valuable typically only extends as far as regular-issue business-strike coins.

Every coin collector who enjoys building date-and-mintmark sets eventually gets to the point that he or she needs to acquire the rarest, most expensive coins in the series to complete the collection. These tough, valuable coins are called key-date coins.

Just like the critical keystone in building a stone archway, a key coin is the (usually single) coin that proves the most difficult to find. Yet, it’s the linchpin piece that completes the set. In layman's terms, key dates are coins that are the most important toward completing a coin collection.

Supplies for a coin collection

Consider, for example, proof coinage and varieties. Far fewer collectors pursue proof issues at scale—especially when referencing pre-1960s coinage. And varieties? There are many extremely rare varieties to be found among the popular series. Still, because so few collectors actively pursue particular varieties—certainly the obscure ones—a hobbyist may be able to buy a variety that has, say, fewer than 100 known examples for a song.

Another important note is that some collectors define keys not just by the coin with the lowest mintage. Rather, they want the issue with the fewest-known examples in a particular grade range. These are known as conditional rarities or conditional keys and refer to the rarest coins at a certain grade point.

Any collector who is asked what a key-date coin is may automatically think of the toughest coins in their favorite series. For example, the phrase “key coin” may immediately conjure up in the minds of a Lincoln cent enthusiast the image of a 1909-S VDB Lincoln cent. It is not only the rarest and most valuable regular-issue business-strike Lincoln cent but also easily the most famous coin in American numismatics. Such numismatic fame tends to accompany many 20th-century rarities.

Another similarly popular 20th-century key coin? The 1916-D Mercury dime, which has long stood as the face of the Mercury dime series. Also well-known are the 1937-D 3-legged Buffalo nickel, 1916 Standing Liberty Quarter, and 1932-D and 1932-S Washington quarters. All are key coins for their respective series.

The Lincoln cent series is easily the most widely collected United States coin. Minted since 1909, there are many rare dates in the series that collectors consider keys.

1909-S VDB – “The” key date of the series is the 1909-S VDB. Widely considered a grail coin, only 484,000 were made at the San Francisco Mint before public outcry over the prominence of designer Victor David Brenner’s initials on the reverse of the coin caused sudden removal of the offending letters. The 1909-S VDB is collectible in any grade, even damaged to be sold as a “filler.” However, nice specimens grading Good-4 or better fetch about $600 and up.

1914-D – While the 1909-S VDB cent was saved in large quantities from the get-go, many collectors of the day overlooked the rare 1914-D. They only noticed the difficulty in finding this date in the 1930s, when newly invented penny boards compelled collectors to build sets of the Lincoln cent series by date and mintmark. Just 1,193,000 were struck, with values of $150 and up for Good-4 specimens.

Other Lincoln cent keys – Many collectors add the 1909-S and 1931-S to the roster of series key dates. Both coins trade for around $100 in Good-4. Some collectors also include the highly popular and rare 1922 plain and 1955 doubled die variety cents, which sell for about $500 and $1,100, respectively, in well-circulated grades.

Another popular collectible, the Buffalo nickel, reigns as a beloved type that draws collectors of all ages. The obverse features a Native American, while the reverse shows an American bison—a hairy four-legged land beast that many refer to as a “buffalo.” The Buffalo nickel series was in production from 1913 through 1938.

1913-S Type 2 – During the first year of Buffalo nickel production, two types of reverse designs were used; one shows the bison atop a mound (Type 1). The other depicts the creature standing on a horizontal line (Type 2). The 1913-S Type 2 is a very scarce issue, with only 1,209,000 minted—very few of which were saved in collectible condition. Prices for this key date start at around $350 in Good-4. Few examples are known in part because the date on the obverse of the coin easily wore off due to its high location on the shoulder of the Native American. This spot was easily worn down in circulation. So, many 1913-S Type 2 examples may be out there but are unidentifiable due to their lack of a date.

1937-D Three-Legged – While this coin is considered a variety and is not necessary to complete a basic date-and-mintmark set, it is nevertheless widely sought by series enthusiasts and routinely included in the sets of more advanced Buffalo nickel collectors. This variety was inadvertently created when a mint worker over-polished the reverse of a damaged 1937-D nickel die. It shows only the hoof and upper hip of the bison’s front leg, which is otherwise missing. Examples in Good-4 sell for approximately $600 and up. 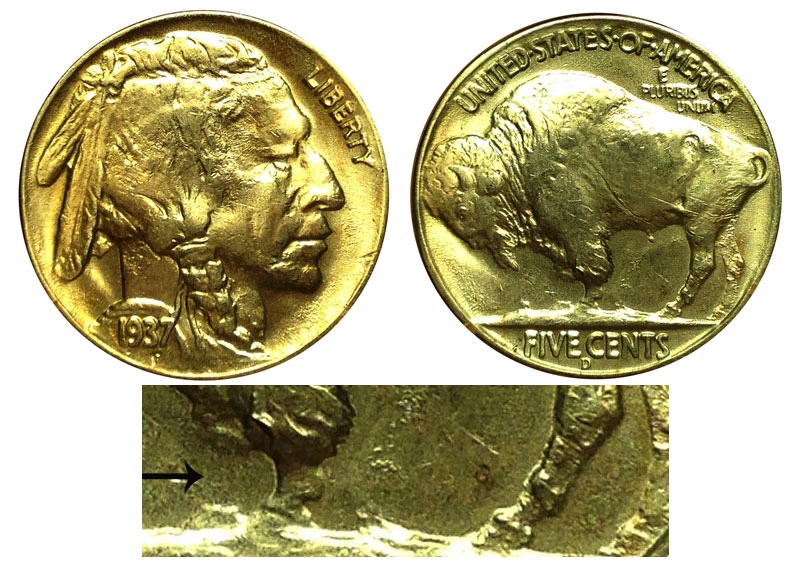 The Jefferson nickel has been in continuous production since 1938. While few collectors think of this series as boasting any real rarities, some scarce varieties can bring hundreds of dollars or more apiece. Meanwhile, the regular-issue business-strike coins are largely common. The key dates of the series, listed below, are obtainable for less than $20 a piece.

1939-D – This Denver key date has a mintage of 3,514,000 and is very difficult to find in circulation. Examples in average circulated condition usually sell for about $12.

1950-D – Boasting the lowest-mintage of the series at just 2,630,030, the 1950-D nickel is a highly sought-after date that was saved in roll quantities early on. Uncirculated specimens can be had for around $17.

The Mercury dime series, officially named “Winged Liberty Head” dimes, were struck from 1916 through 1945. Most of the dates in this 90% silver series are relatively common in circulated condition. However, there is a handful of scarce issues that collectors must obtain to complete a date-and-mintmark set, with one date rarer than the rest.

1916-D – The undisputed key of the series with a mintage of only 264,000. The 1916-D Mercury dime is considered one of the essential numismatic rarities of the 20th century. The popularity of this coin is perhaps eclipsed only by the 1909-S VDB Lincoln cent. Prices for the 1916-D Mercury dime begin around $1,000 in Good-4.

The Standing Liberty quarter was one of the shorter-duration series of the 20th century, in production from 1916 through 1930. All dates are desirable, though most of the issues produced during the last few years of the series are decidedly common in the lower grades. The same can’t be said for the earlier issues, many of which are scarce. The rarest of all is the first-year issue.

Struck since 1932, the Washington quarter serves as the workhorse of the American economy. Pre-1965 issues are made from 90% silver and thus are highly desired by collectors today. The majority of these silver dates are quite common, though some dates are scarce and demand outstanding premiums. Among these are the two branch-mint key dates from the first year of the series.

Considered by many to be one of the nation’s most beautiful coins, the Walking Liberty half dollar was struck from 1916 through 1947. The series is widely collected by date and mintmark, putting great demand on the scarcer issues.

1921-D – The rarest of the business strikes in the series, the 1921-D Walking Liberty half dollar saw a mintage of just 208,000 pieces. It commands about $500 in a grade of Fine-12. Mintages were low in the early 1920s due to a post-World War I recession that lightened demand for new circulating coinage. This is just one reason so many of the 1921 dates are scarce not just among Walking Liberty half dollars but all series in production then.

This article is hardly exhaustive in its review of United States key date coins. It nevertheless illustrates some of the most important coins sought by those who collect the popular 20th-century coins. Key dates are found among all United States federal series going back to the 1790s.

As key coins are both rare and valuable, it’s prudent for the collector to be overly cautious when buying them. In a day and age when counterfeits are more sophisticated than ever, it’s wise to buy key coins certified by a major third-party grading firm and/or purchase your key coins from a trusted, reputable coin dealer.