Relic Hunting with a Metal Detector

Coinshooting and relic hunting are probably the two most popular categories of metal detecting, and the two with the most overlap. If you're hunting for old coins, you will find a bunch of relics, and if you're relic hunting, you're likely to find a few coins eventually. Many of the techniques used in coin hunting serve you well in relic hunting, except that you won't be discriminating out iron.

Where to Find Relics With a Metal Detector

Relic hunting takes a bit of “History Detective” -style work, as well as some good old-fashioned fieldwork to find places that aren't hunted out. That shouldn't discourage you, since hunting old historical stuff is what got you into relic hunting in the first place! Knowing as much history as possible about your relics make them that much more interesting. 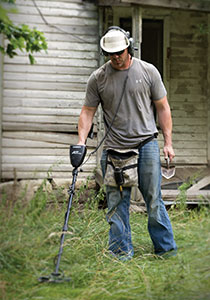 Research Is Job One

Ignorance is no excuse if you're caught somewhere metal detecting is not allowed. You risk seizure of your machine, fines, and even jail time. Trespassing on private property to hunt relics can get you shot!

Some public areas require a metal detecting license, some do not, and some are completely off-limits. To avoid misunderstandings, try to get permission in writing from landowners before detecting on private property. Offer to split any finds with them, if they refuse permission at first.

Boots on the Ground

Now that you have an area pinpointed on a map, its time to get out there and find it! With so many smart phones having GPS and navigation apps, getting to a promising area can be as simple as using Google Earth to determine GPS coordinates and loading them into your phone. Don't just rely on your phone, though. Bring a map, or a printout of a digital map, and something to write notes on it with. A pocket notebook with your research notes wouldn't hurt, either.

Carefully go over the location you're scouting. Look for flat spots in an area of uneven ground. It might indicate a place someone flattened out for a building. Also look for small piles of pottery or glass, stones or bricks, or a depression that may have been a cellar.

Work any trails, especially those leading to or from a water source. These trails may have been used for hundreds of years. Check around very old trees. If you're working a field or meadow and can't find any obvious places to hunt, work from the edge of field inward, or work in two diagonal lines that cross in the middle, sweeping your detector with no discrimination. When working a field, use small flags to mark your finds to gain a picture of the layout of the old settlement. Your local home improvement store will sell packs of those little wire stake flags used by utility companies. (Remember to remove all flags and FILL ALL HOLES, even in empty fields, before you leave.)

You may have spotted old stone walls or foundations while hiking or hunting. Those would make great relic hunting spots. Look for depressions in the ground, old springs or wells, or trash pits downhill from the area. Stone walls, sunken roads, and trails (especially around river fords) are also good hunting spots. Looks for the ruts of old wagon roads. If a site dates from the late 1800s or later, you may be able to determine where the barn and garden was. Gardens are good spots to look for coin hoards, as the wife might often bury her “egg money” in a jar or tin while tending the garden.

Check local history for river fords or steamboat landings, or the location of early farms. Old plat maps and deeds, and even last will and testaments that have maps are great for locating early settlements. 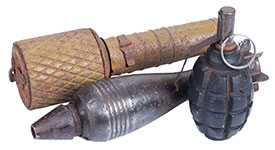 One of the most popular form of relic hunting is finding war relics. Civil War and Revolutionary War relics can be found in the US, while relics as recent as WWII and as ancient as the Roman Conquest can be found in Europe.

Since many battlefields are off limits as national parks or cemeteries, you will have to be creative. Ask for permission to hunt land adjoining the national parks, where the battle may have spilled over. Much of the fighting in a war isn't in big battles, but in skirmishes and lesser fights. Use records and old letters to find where winter camps were established, or where staging areas before a big battle were.

Look for fire rings near campsites and resting spots. If research shows that a column went X miles when marching from one point toward another, find out which roads existed back then that would have been big enough to move troops, then go that same X miles and look for likely spots where the soldiers would have rested. Check along stone walls, sunken lanes, water sources such as creeks and springs, and old river fords where troops may have crossed (don't forget to check the riverbanks downstream for stuff that was lost and floated away.)

West of the Mississippi and Missouri Rivers in the United States are great places to look for pioneer wagon trails, because 19th century settlers would start casting off items to lighten their overloaded wagons, as they got further along the trail. The West is full of old mining ghost towns, abandoned railroad spurs, and stagecoach stops. Ghost towns aren't just for the desert, though. Abandoned towns, old tourist locations around springs, and other settlements have been swallowed up by the vines of the Deep South and the woods of the eastern half of the country.

You can get by with a standard metal detector when relic hunting. Many great finds have been made with a sub-$200 detector. However, the dedicated relic hunter is going to want something tuned especially for hunting relics. This means a good adjustable ground balance, deep depth, and a sensitivity to pick the good targets out of the large amount of trash you will encounter.

We conducted a survey among relic hunters in the US and abroad, and asked for their recommendations for entry-level, mid-range, and “best at any price” metal detectors suited for relic hunting. This is what they told us. 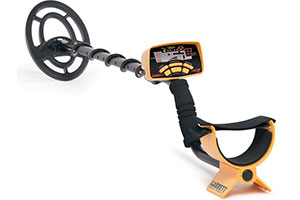 You may notice more Tesoro metal detectors listed in this guide than in others. While most Tesoros do not have a fancy video screen, they have a reputation for sensitivity and going deeper than some of their competition. The downside is that you have to learn the tones for different types of targets. Any of the machines below would make a good entry-level relic hunter. 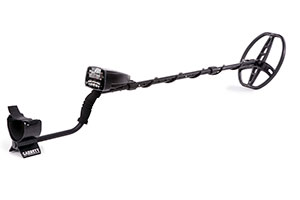 Stepping up from the starter machines, these mid-range relic hunting metal detectors are all-around favorites. 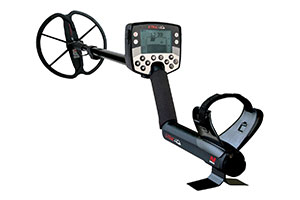 These relic hunting metal detectors are considered some of the best you can own.

No matter which metal detector you use to hunt relics, there are some “best practices” you can use to maximize your finds.

Other Equipment for the Relic Hunter 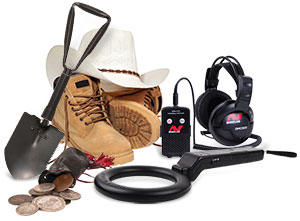 Relic hunters sometimes require heavier duty digging implements than coin shooters, due to hunting in areas where the dirt has been packed down. Also, since many relics are larger than a coin, they can be spotted much deeper than coins are. Since you'll be digging larger and deeper holes than other detectorists, this is the only time I would recommend a shovel in addition to a digger.

The last thing you want is for a digging tool to bend or break while out on a remote dig. Make sure your shovel, digging tool, (and pick, if you're dealing with hard soil and deep targets) are all made of heavy gauge metal. Many relic hunters go for an all-metal shovel, to minimize the chances of a handle breaking. Some folks like the folding “trench shovels” like those used in the Army, but make sure you're getting the real thing instead of a flimsy imported imitation that will break in a week. Others buy a T-handled shovel. There are many styles made for gardening and especially for metal detecting.

Even with a shovel, you're going to want a “digger.” This is a small, sturdy digging implement about the size of a gardening trowel. Again, a cheap aluminum one is going to be money wasted. Get something heavy-duty like a Fiskars Big Grip Gardening Knife, or a Japanese “hori hori” gardening knife. You want a sharp, serrated edge to cut through roots and sod. Diggers made especially for metal detecting include those by Lesche and Predator.

Anytime you are on public or private land, the most important thing is to fill your holes and haul out your trash. If you're hunting in grassy areas, practice digging “plugs” when retrieving items, so that you leave the smallest possible trace you were there. Our Beginner's Guide to Metal Detecting article includes a section on digging plugs.

Ask fellow detectorists if they've ever stuck a find in their pocket and found it was missing when they got home, and most of them confess it has happened to them. This is one reason to have a dedicated “finds pouch.” Another reason is that many of the relics you dig are going to need a lot of cleaning when you get home, and may have sharp edges. They may also simply be too big to fit in a pocket. Bayonets, axe heads, and receivers to old rifles are just a few of the items you could find, and make you wish you had a backpack.

A pinpointer is a hand-held device used to scan holes for targets. After digging your initial plug, use the pinpointer to sweep the sides of the hole and the plug itself. This prevents you from doing a lot of digging while the target was in the side of the hole, or came out in the grass roots of the plug. A pinpointer allows you to retrieve targets faster, which means more time for hunting.

Make sure you have sturdy gloves to protect your hands from all the digging you will do. Good boots or hiking shoes help with uneven terrain. Jeans protect from briers and poison ivy. Keep insect repellent, water and a small first-aid kit in your pack.