"Silver nickels" might sound like an oxymoron if you didn’t know about the United States five-cent coins made from 35% silver during World War II.

The United States government was in a bind to save materials for the war effort. So it decided to pull the nickel content out of the five-cent coin to allocate the metal for war artillery.

As the wartime nickels of 1942 through 1945 contain silver, a valuable precious metal, they are worth more than face value—much more! But how much is a silver nickel worth today? 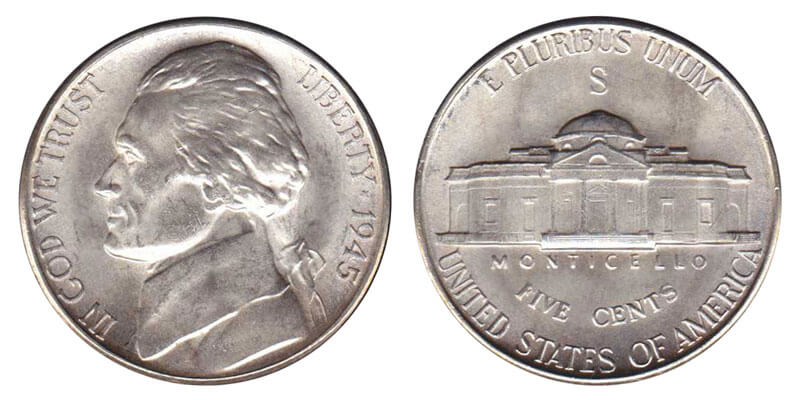 How Much Are Silver Nickels Worth?

Keep in mind, the value of silver fluctuates all the time. This means the precise base value of a circulated, business-strike silver nickel absent any unusual varieties varies from moment to moment.

The silver content of a standard wartime nickel is 0.05626 ounces. Doing the math, which means when silver is valued at $15 per ounce, a war nickel contains about 84 cents of silver. When silver is $20 per ounce? The intrinsic value of a silver nickel jumps to $1.13.

Of course, as with all coins, uncirculated and proof examples are worth more. The same is true of special pieces containing varieties. And, in the case of Jefferson silver nickels, there is additional value for pieces that contain Full Steps detail at the base of Monticello on the reverse. Below is a breakdown of values for silver Jefferson nickels by date, grade, and variety.

World War II, an international conflict in which the United States formally fought from 1941 through 1945, was a truly all-in effort for American citizens. They had to ration everything from sugar and rubber to meat and aluminum. Yes, the United States and the Allied Forces were successful in making the world safe for democracy. But it wasn’t easy. And the trying times spawned many interesting coins made from alternative metals, with the silver “nickel” among these.

Most changes to our nation's coinage aren't done on a whim. The decision to strike five-cent coins from silver wasn't made willy-nilly by someone in the back office. It was an emergency response to an unprecedented situation—and one that required an act of congress to permit.

Congress authorized the order on October 8, 1942. It was barely 10 months into the nation's military engagement in World War II. Virtually overnight, production of the five-cent coin shifted from an alloy consisting of 75% copper, 25% nickel to a 56% copper, 35% silver, 9% manganese format. 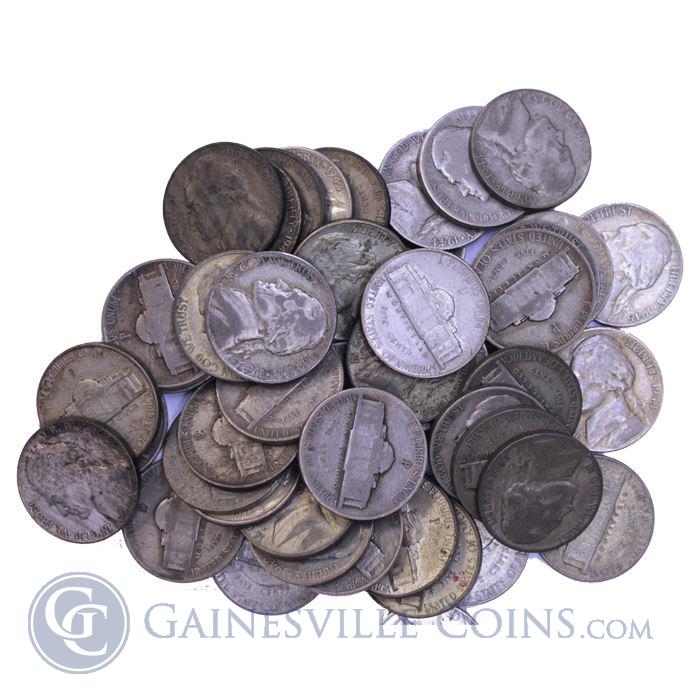 These silver Jefferson nickels weren’t the only unusual coins to originate during World War II. The Lincoln cent underwent similar changes, for similar reasons, in 1943. The United States Mint began striking the one-cent coin from a zinc-coated steel composition. The copper that would’ve ordinarily been used to make the penny was saved for making ammunition shell casings.

However, the 1943 steel cent was a one-year-only issue. The U.S. Mint resumed the striking of copper-based Lincoln pennies the following year in 1944.

Other nations also made war-related metal composition changes to their coinage. For example, the Royal Canadian Mint removed nickel from its five-cent coin, instead opting for an 88% copper, 12% zinc composition in 1942 and 1943. In 1944 and 1945, the composition was switched to chrome-plated steel. Other nations that struck coinage from emergency compositions include Germany, Japan, and Indo-China, among others.

When the Jefferson silver nickels were new (uncirculated), their complex metal composition roughly simulated the silvery-grey appearance of "regular" Jefferson nickels. However, these wartime nickels eventually toned to a greyish green color when worn. Also, many collectors report these five-cent coins have a greasy feel. This is something owed to the manganese in the composition.

Meanwhile, many Brilliant Uncirculated examples have a lighter, whiter appearance than their nickel-based counterparts, mainly due to the significant amount of silver in the alloy.

In addition to their coloration, these wartime nickels have something else that visually sets them apart from the rest of the crowd: their oversized mintmark. All silver nickels made from 1942–1945 bear a large "P," "D," or "S" mintmark over the dome of Monticello on the reverse. These correspond to the Philadelphia, Denver, or San Francisco Mints. 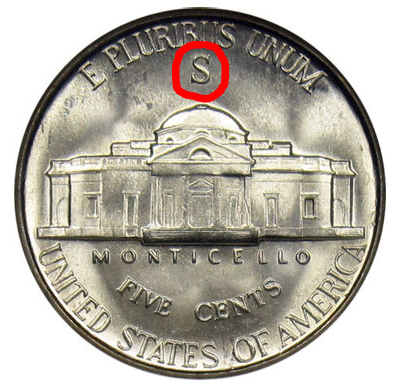 Only the silver five-cent coins produced from 1942 through 1945 bear this feature among the Jefferson nickels. Thus it’s important for collectors to check the reverses of all Jefferson nickels that pass through their hands. Also, the presence of the large mintmark can help collectors distinguish the nickel-based 1942 nickels made earlier that year from the silver ones that were struck in the latter months of the year.

More articles about U.S. coin values from the author: