What is Silver Bullion? Everything You Need To Know

What is Silver Bullion? Everything You Need To Know

Silver bullion is any piece of highly concentrated silver, typically defined as 99.9% pure. Bullion is usually intended for investment purposes and comes in the form of bars or coins. 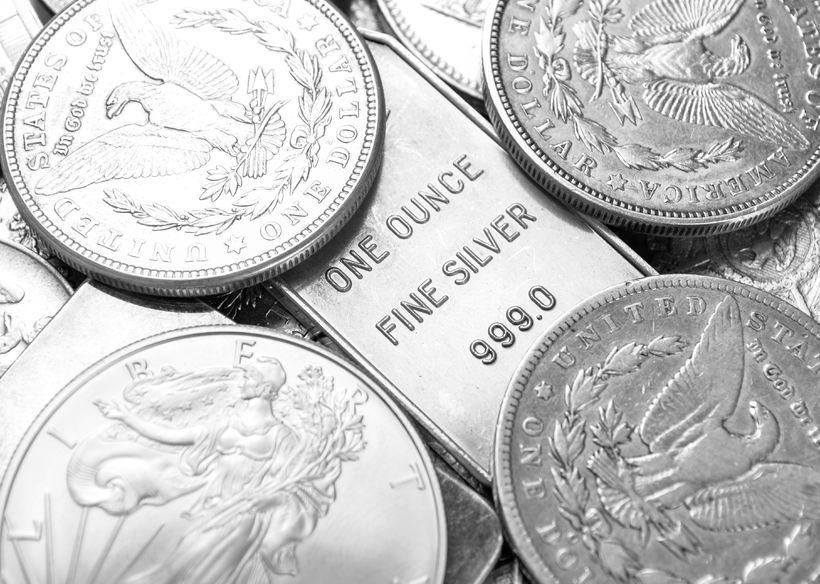 The Origins of Silver As An Investment

Silver is one of the most useful elements known to man. It has the best electrical and thermal conductivity of all pure metals. Since ancient times, its superior ability in reflecting visible light has made it the preferred material for making mirrors. But where silver has really shined, so to speak, is as a store of wealth.

The ancient Greeks and Persians were the first people to issue silver coins. The ready availability of these coins put silver in the reach of normal people for the first time. Saving silver coins became the easiest way for common people to store wealth.

Roman silver denarius of Emperor Hadrian
Rasiel Suarez (own work)
Hoarding silver coins accelerated in the mid-20th century as silver prices rose. This forced governments to either reduce the silver content in circulating coins or remove the silver completely. As inflation spiked in the 1970s, silver demand intensified. This led to the introduction of pure silver bullion coins in the 1980s as an investment vehicle.

Silver bullion is silver which derives its value solely from its metal content. There is no artistic or collectible value to silver bullion, unlike in jewelry or rare coins. Silver bullion comes in many shapes and sizes to meet the needs of the investment market. While one troy ounce is the most popular size, you can buy silver bullion in weights ranging from one gram to 10 kilograms!

Silver bullion coins are made by government mints for sale to investors. Modern silver bullion coins have a purity of 99.9% (.999 fine) or better. Most pure silver bullion coins weigh one troy ounce, which is 31.1035 grams, or 1.097 "regular" ounces. These standards make tracking your silver holdings a simple matter. The number of coins you have, no matter the nation that minted them, equals the total ounces of silver you own.

The most popular silver bullion coin in the world is the American Silver Eagle, produced by the US Mint. More than a half-billion Silver Eagles have been sold since its introduction in 1986.

Other popular silver bullion coins include the Canadian Silver Maple Leaf and the Austrian Silver Philharmonic.

Mintages of the Chinese Silver Panda place it in the upper tier of silver bullion coins. Despite that, Pandas have a higher premium that dampens support to some degree. The price of the Silver Panda is comparable to collectible coins, like the Silver Kookaburra and Silver Koala. Like these coins, the Silver Panda features a different design every year.

Larger bullion coins generally carry a numismatic (collectible) value above their silver content. Common sizes are 2, 5, and 10 troy ounces, and 1 kilo and 10 kilos. The 10-kilo coins are usually limited to a mintage of 200 coins or less.

Silver coins carry a face value, also called a denomination, to give them legal tender status. This denomination is a symbolic value, and is far lower than the value of the coin's silver content. As legal tender, the weight and purity of the coins are backed by the issuing government. This also gives tax and import/export advantages in some jurisdictions. Most importantly, the government prosecutes fake legal tender bullion coins under anti-counterfeiting laws, which are much tougher than normal laws. Try making a fake American Silver Eagle, and the U.S. Secret Service will be knocking on your door!

The peace of mind that legal tender bullion coins give the silver investor comes at a price. Government-issued silver bullion coins cost more than silver bullion bars or rounds of the same weight. This is due to the higher premiums, called seigniorage, that governments charge for their coins.

____________________
WHAT IS SEIGNIORAGE?
Seigniorage is the profit that a national mint makes. It is the difference between what it costs to make a coin or bill, and its face value. For bullion coins, it is the charge over and above the cost to make the coin, including the value of the bullion.

These seigniorage charges finance the operation of the mint. In fact, mints traditionally collect more seigniorage than needed, sending the excess to the government. This makes a national mint one of the few parts of the government to regularly make a profit!

Silver bars of different sizes
(Gainesville Coins photo)
Silver bullion bars come in two basic forms: poured and minted. Poured bars are individually made by pouring molten silver into molds. Minted (or pressed) silver bars are cut from bar stock and stamped with a design, much like silver coins and rounds. It is much faster and simpler to make pressed silver bars than poured ones. That said, many people will pay a little more for the individual, rustic look of poured bars.
____________________
DID YOU KNOW?
There is a difference between silver bars and silver ingots, and it has nothing to do with size! Ingots are a rough form of silver, intended to be further worked into a finished product. Bars are finished products, ready to be sold.
____________________

When shopping for silver bullion, you may see silver bars described as "name brand" or "generic." Name brand silver bars are made by famous refiners such as PAMP Suisse, Engelhard, and Johnson Matthey. Government-minted silver bullion bars are naturally considered name brand bars as well.

Johnson Matthey is another famous name in silver bullion. Production of Johnson Matthey (JM) silver bars ended in 2015 when the JM refining arm was sold to Asahi Holdings. Asahi produces the same bars at the same facilities, but under the Asahi name. Old JM bars command a premium, but do not have the same collectible status as Engelhard bars.

Generic silver bars are produced by any number of smaller refiners and private mints. Generic bullion bars have lower premiums than name brand silver bars. No matter the source, millions of silver bars are minted each year to meet consumer demand.

Silver bullion rounds may look like coins, but there are several major differences. The best way to think of silver rounds is that they are coin-shaped, or disc-shaped, silver bars. Silver rounds have no seigniorage charge, so they sell for much less than bullion coins. Silver rounds are made by private mints and refiners instead of the government. Because of this, they are not covered by a nation's anti-counterfeit laws. Production of fake silver rounds is of course still a crime, just like making fake silver bars.

+ Lower premiums than silver bullion coins.
+ Far greater production numbers than coins means no product shortages.
+ More suitable for artistic and commemorative designs than silver bars.
+ Thousands of designs, with new ones added all the time.

- Lower prices paid mean lower resale value than coins.
- Not legal tender means silver rounds are not government-guaranteed.
- Some rounds may have a flatter strike than legal tender coins.

____________________
Silver bullion rounds can feature any theme imaginable. Christmas and religious themes are popular. So are commemorations of historic events and patriotic themes. Wildlife and sea life themes are also favorites. Promotional themes were popular in the 1960s and 1970s, when silver was cheap. These silver rounds featured a company's logo, and sometimes the date of a big conference.

Anyone with the desire and money can have a unique design made on a silver round (subject to copyright and trademark laws). Even so, the costs of having custom dies cut means that you would need to sell thousands of rounds to make a profit.

Recreations of classic coin designs are among the best-selling silver bullion round designs. Some versions recreate both sides of an old coin, while others only use the front design. What they have in common is that they all display the one troy ounce weight and .999 fine purity.

To fight unintentional confusion and intentional deception in the sale of silver rounds, the government amended the Hobby Protection Act in 2014. This law mandates that:

"An imitation numismatic item which is manufactured in the United States, or imported into the United States for introduction into or distribution in commerce, shall be plainly and permanently marked “COPY.” The word “COPY” shall be marked upon the item legibly, conspicuously, and nondeceptively…"

1,000 oz silver bar similar to the ones traded on the COMEX and LBMA exchanges
'Unit 5' - wikipedia
The British Silver Britannia illustrates this preference. Introduced in 1997, it was struck in historically-accurate .958 fine "Britannia Silver." Buyers disliked the strange purity, and sales suffered as a result. The Royal Mint increased the Britannia's fineness to .999 in 2012 to match other bullion coins.

Some investors buy old circulated silver coins with no numismatic value as bullion. The best-known example is the 90% "junk silver" coins of the United States. U.S. dimes, quarters, and half dollars were made from an alloy of 90% silver, 10% copper through 1964. Premiums are lower on 90% silver U.S. coins than on modern coins, but higher than generic silver rounds or bars. Despite the cost, some investors prefer junk silver for its historic appeal and legal tender status.

Silver has been called "the working man's gold" for centuries. From ancient times, the only way a regular person could save silver was by buying silver coins or jewelry.

Today, buyers have an unprecedented number of choices when investing in pure silver. Silver bullion is available in a form and at a price to meet anyone's budget.

What is the difference between silver coins and silver bullion?

Silver bullion is any item made of highly pure silver (generally 99.9% pure or higher). Bullion is valued based solely on its fine silver content.

On the other hand, all silver coins are legal tender: They are issued by a government, and thus their silver content is backed by the full faith and credit of that government. This gives silver coins added value in the view of some investors. Most silver coins are also produced in limited quantities, which can impart collectible appeal to the coins.

Is it better to buy silver coins or silver bullion?

Silver bars are often the cheapest way to get exposure to silver. Meanwhile, silver coins tend to be more liquid (i.e. easier to sell down the road) and may offer upside as collectibles. There are pros and cons to each option.

Read more about silver coins vs. silver bars from our precious metals experts by following the link.

What is the best silver bullion to buy?

It all depends on your investing goals. If you are merely interested in getting the most silver for your dollar, gram-for-gram or ounce-for-ounce, then silver bars may be your best option. However, if you are looking for greater upside potential with your silver investment, you may be interested in numismatic or semi-numismatic silver coins, which have added collectible appeal.

For a more detailed answer, check out our comprehensive guide on the best way to buy silver.

Is now a good time to invest in silver?

The short answer: Yes. Silver is a valuable commodity with a diversity of uses. Silver also remains well shy of its all-time high price, which it is likely to surpass in the future.

Trying to perfectly time an investment is virtually impossible. One strategy to combat this is to dollar-cost average: You can simply buy the same dollar amount of silver on a regular basis, regardless of the price, in order to consistently accumulate more silver and take advantage of dips in the price without having to predict when they will occur.