A silver certificate is a form of paper money that could be exchanged for silver coins on demand.

Silver certificates were issued from 1878 through 1964. They were originally redeemable for their face value of silver dollars.

This changed in the years since the elimination of circulating precious metal coins. The notes can no longer be redeemed for their equivalent face value in silver coinage.

The first silver certificates were issued in 1878 in the wake of the Coinage Act of 1873. This law demonetized silver. In other words, it abolished the right of those in possession of silver to have their bullion coined into legal tender money.

The act affirmed the place of the gold standard in the United States. In doing so, it ended bimetallism—a monetary standard in which there is a fixed rate of exchange between two metals (such as silver and gold) that serve as the basis for the value of a monetary unit, like the dollar.

The law is often derisively called “The Crime of ’73.” Its policies caused much aggravation among the millions who supported the Free Silver movement of the late 19th century. This included populist Democratic presidential candidate William Jennings Bryan. His famous “Cross of Gold” speech advocated for the expansion of pro-silver policies.

Silver certificates were thus born in part from the socioeconomic fallout following the Coinage Act of 1873. As such, it defeated the unlimited coining of silver into money.

Through series 1923, silver certificates were printed on large-size notes measuring 3.125 inches by 7.375 inches. These large notes were often dubbed “horse blankets.” This was an exaggerated reference to the size compared to modern, smaller-dimension notes introduced in 1928.

What Are Silver Certificates Worth?

Most folks who own silver certificates want to know the value of their old pieces of paper money. Of course, there is no single value for any particular note. Values range widely depending on a number of factors.

These include the following:

Numerous factors go into determining what a silver certificate is worth. Many of the key value determinants can be easily recognized with just a cursory glance of the bill.

The denomination should be quite evident. The date or series is located on the obverse (or front) of the note. So is the serial number and the Federal Reserve seal and letter.

Certainly, too, the physical condition and overall wear-based grade is a major factor in the value of a silver certificate. Crisp Uncirculated notes worth more than worn or damaged pieces.

There are also premiums for a type of palindromic phenomenon known as a radar note, in which the serial numbers read the same forward and backward. Some individuals also pay premiums for serial numbers symbolizing a special personal date. It may be a birthday or anniversary. Such a number would otherwise appear ordinary to most other people.

The majority of silver certificates available today are common pieces made since the 1930s. This includes Series 1935 and 1957 $1 bills, Series 1934 and 1953 $5 bills, and Series 1934 and 1953 $10 bills. Most of these bills are extremely common in worn grades. Such pieces are worth only a few dollars above their respective face values. That's in circulated condition without any errors or other valuable anomalies.

There are many ways to collect silver certificates. Some collectors pursue all series and Federal Reserve seals of a single denomination. Others focus on collecting all denominations from a certain period.

Another idea is to build a type set consisting of one example from each denomination and of each series or signature. You might even decide to assemble a comprehensive collection of silver certificates. It would span all denominations and series from the 1870s through the 1960s.

However you decide to build a collection of silver certificates, worry not about whether there’s a right or wrong way to collect them. There isn’t. There are essentially as many methods for collecting paper currency as there are paper currency collectors. Decide the approach that is right for you, and then go after your goal with confidence.

No matter what you collect, buy the best-quality notes you can afford. Buying high-quality silver certificates help you build a better, more attractive collection. Higher-grade pieces with few to no detracting marks also tend to fare better over the long term. This helps ensure you a better chance of scoring a stronger return on your investment if and when the time comes to sell your silver certificates. 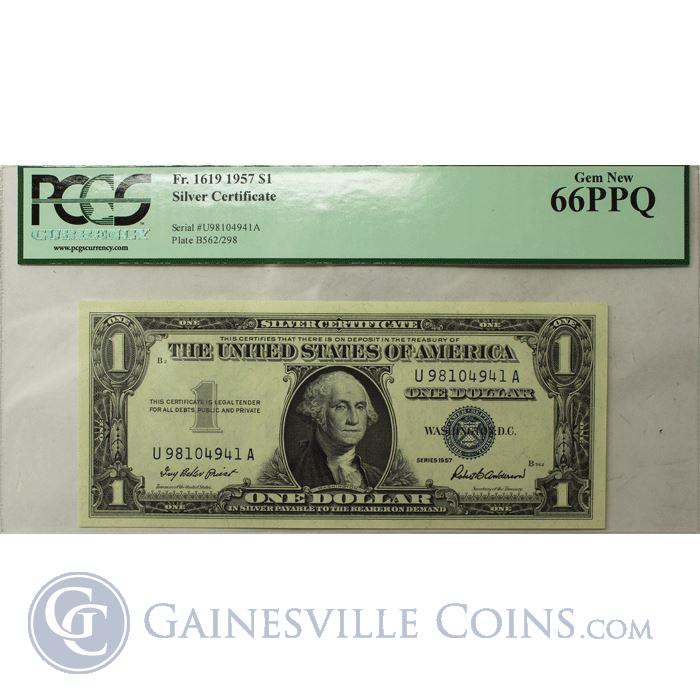 How much is a silver certificate worth?

The value of a silver certificate depends on several factors, such as its condition, its denomination, and its serial number. Refer to the section above, What Are Silver Certificates Worth?, for a full explanation.

What was the purpose of a silver certificate?

Silver certificates were a form of paper money issued by the federal government. They could be redeemed for silver coins on demand. The reason this was important was because the Coinage Act of 1873 effectively ended the free coinage of silver. Thereafter, the only guaranteed way to exchange paper notes for silver at the bank was to have a silver certificate.

Can you cash in a silver certificate?

Yes, silver certificates can still be exchanged for their face value in Federal Reserve notes (i.e. today's paper money). They are still legal tender and can be spent as cash.

What Is a 1957 silver certificate worth?

The silver certificates made in 1957 are among the most common. They are typically only worth about $1.25 to $1.50. An uncirculated example (one that is crisp and in virtually flawless condition) may be worth up to $6.

Generally, $2 bills are only worth their face value: two dollars. Even though you don't often see $2 bills in circulation, they are not rare. You can order them from any bank at the cost of their face value, but usually in minimum quantities of 50 notes (i.e. $100 of them). The bank teller may also have a few loose $2 bills available to exchange.

What does a blue seal on a dollar bill mean?

The blue seal indicates that the dollar bill is backed by silver—in other words, it is a silver certificate! This is important because most silver certificates look nearly identical to the modern $1 bill and $5 bill aside from the blue seal. (In fact, that's where those paper note designs originated from.)

More articles about silver from the author: