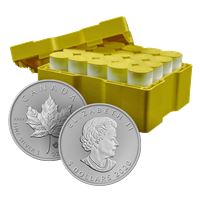 The world renowned Royal Canadian Mint, sometimes referred to simply as the RCM, has a growing reputation for refining and minting some of the most trusted precious metal coins in the world. In addition to the Canadian Gold Maple Leaf, the mint also produces tens of millions of Silver Maple Leaf Coins each year. These coins are available for 2020, beloved by both coin collectors and investors who are looking for physical silver to help balance and diversify their investment portfolio.

The institution that evolved into the RCM first began operating its coin presses in 1908. In 1936, the Royal Canadian Mint built a new refinery facility to meet their increasing demand worldwide from banks for bullion bars. It was originally established as a branch of the Royal Mint in the United Kingdom, harking back to Canada’s time as a British colony in the New World. It officially became a Crown Corporation in 1969, meaning it became a private corporation (rather than a department under the Finance Ministry) whose sole stakeholder was the Canadian government.

The Mint first began striking its Gold Maple Leaf coin for international investment in 1979 in order to compete with the South African Krugerrand. Not long after, in 1988, the Silver Maple followed. The 1-ounce silver bullion coin has been minted each year since, increasing in popularity over time. Today, it stands out among most other modern silver coins due to its remarkably “four-nines” purity, or .9999 fine silver content. This means the Silver Maple Leaf is composed of 99.99% pure silver.

Internationally, the RCM is respected as one of the most technologically advanced gold and silver refineries. The RCM guarantees the purity of their bullion coins to be .9999 fine. In fact, the RCM refines all of their silver internally to produce a multitude of brilliant silver bullion and collectible coins. New anti-counterfeiting measures were also implemented for the Silver Maple Leaf beginning in 2014.

Canadian Silver Maple Leafs are one of the most collected coins in the world. To protect consumers, they feature two new security features: a brand new radial line finish and laser-engraved mark. The silver bullion coin's new finish has a micro-engraved textured maple leaf incorporating the number "20" (for 2020) in a small privy mark. In addition to Silver Maples, there are many other varieties of silver coins from the RCM produced each year. These coins showcase commemorative motifs such as wildlife, sports, dinosaurs, the patriotic “O Canada,” and much more. Canadian silver bullion coins are recognized for their superb quality, complex designs, and .9999 pure silver content.