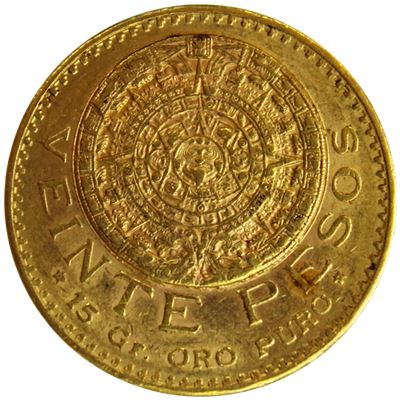 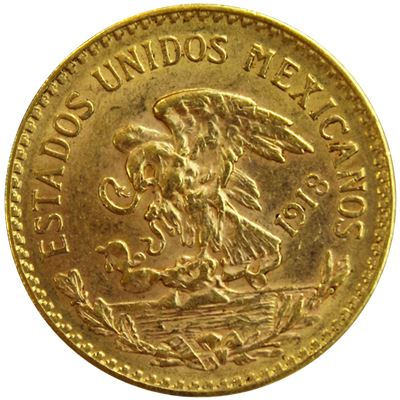 From one of the oldest mints in North America, the Mexican 20 Pesos Aztec Gold Coin is just shy of half an ounce containing 0.4823 oz of fine gold. As a Mexican legal tender, the coin carries a face value of 20 Pesos.

The obverse of the Gold Mexican Peso coin shows the Mexican coat of arms, featuring an eagle defeating a rattlesnake, and talons making purchase on a cactus. The words, "Estados Unidos Mexicanos," circle around the eagle with the date to the right. The reverse shows a very detailed design of the ancient Aztec calendar with the denomination under it reading, "Veinte Pesos," and under that, "15 Gr. ORO Puro."

The Mexican City Mint or its Spanish name, la Casa de Moneda de México, meaning the Mexican House of Money, is the national mint of Mexico. Built in 1535, it is the oldest mint established in the Americas. After being taken over by the Spanish, the mint was built in the same location where the Aztec city of Tenochtitlan once stood.

This photo is a reference only with these coins being random dates; therefore, coin designs may differ. 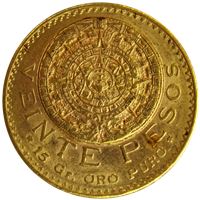 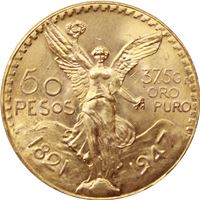 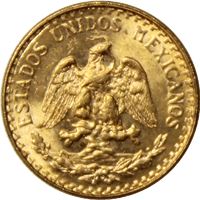 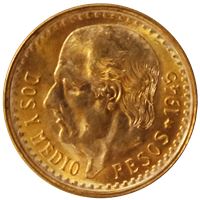