1982 was a big year for the Lincoln cent. After years of experimenting with cheaper alternatives to the 95% copper alloy used to make pennies, the US Mint changed to a zinc coin with an extremely thin coating of copper.

To make things even more interesting for coin collectors, the Mint introduced a modified obverse design halfway through the year. Among other things, they made the date smaller. This resulted in seven different versions of the 1982 Lincoln penny, not counting the proof bronze 1982-S cent from the San Francisco Mint. 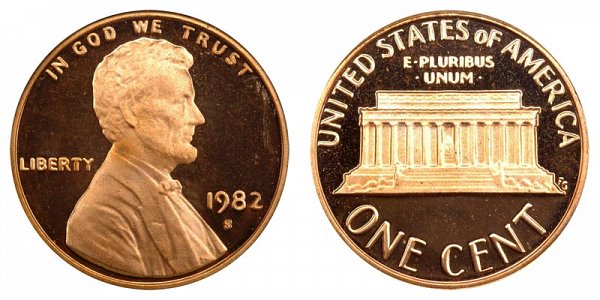 Both bronze and clad 1982 Lincoln cents were produced with small dates and large dates. The Denver Mint was the only Mint branch that moved from bronze to clad zinc coin blanks before receiving the new “small date” dies.

Your 1982 penny value is going to be based mainly on whether the coin is made of bronze or is the more common clad coin variety.

There’s a hidden secret in the Philadelphia Mint Lincoln cent mintage numbers from 1982. Both the West Point and San Francisco Mints assisted in penny production that year, but their cents did not include mint marks. This makes them indistinguishable from Philadelphia issues. 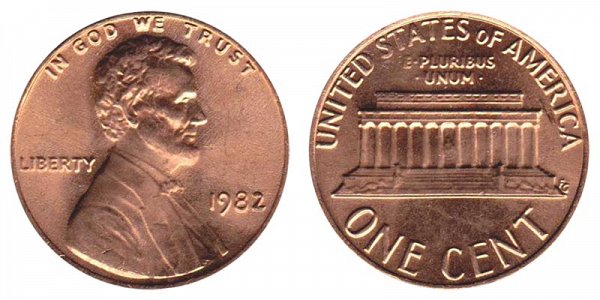 The plan in 1982 was for the San Francisco Mint to use the new zinc-core blanks to make Lincoln cents for the 1982 proof sets. Mint officials were forced to use the old 95% copper coin blanks instead. The powerful coin presses used to make proof coins were cutting completely through the copper cladding on the new blanks, exposing the zinc core beneath.

The problem was solved in 1983 by adding extra copper cladding to the zinc-core Lincoln cent blanks destined for making proof cents.

Why Did The Mint Stop Using Copper To Make Pennies?

High copper prices in the 1970s meant that the copper content in a Lincoln cent was worth more than one cent. One early replacement plan was to make pennies from aluminum. This idea made it all the way to Congress. The Mint was so sure that they would get approval for the change that they struck a million and a half 1974 aluminum Lincoln cents. Unfortunately, an alliance of copper and vending machine lobbyists sank the plan.

Copper prices fell during the late 1970s as the world reeled from a recession caused by the Arab Oil Embargo. But by 1980 prices were high enough to force the Mint to once again search for alternative materials for the cent. They settled on a zinc coin with a thin copper cladding. Although the zinc core, copper-clad cents had the same size and appearance as the copper coins, they were notably lighter: 2.5 grams compared to the 3.11 grams of the old coin.

In 2016, nearly 35 years after the transition to the “Zincoln,” a sharp-eye collector discovered something that wasn’t supposed to exist: a 1982-D bronze Lincoln cent with the “small date” obverse! The coin was certified in 2017 by NGC, which graded it AU58, just a whisper shy of Mint State. It sold for $18,800 in a 2017 Stack’s Bowers auction. 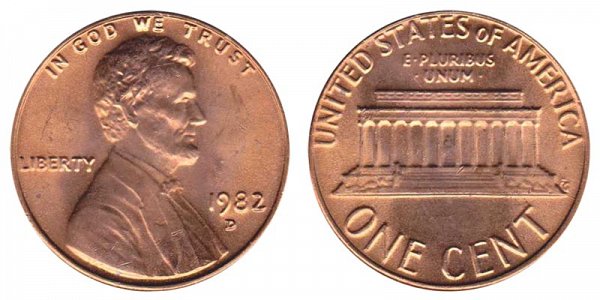 The discovery of a second 1982-D bronze cent was announced in May 2019, when it was placed in a Heritage auction. This coin fetched $10,800. The original coin went up for auction a second time in September the same year, and only brought $8,400.

The 1982-D bronze Lincoln cent is considered a transitional error by the grading services, instead of a new variety. They were apparently created when bronze planchets stuck in a hopper in the Denver Mint worked loose and joined the millions of clad blanks being fed into the presses. While more 1982-D bronze small date Lincoln cents may be discovered in the future, it did take 35 years for the first one to appear.

It may be difficult to distinguish a Large Date 1982 penny from a Small Date one if you don’t have two to compare side-by-side. Yet there are some visible differences.

As this image from USA Coinbook illustrates, the tops and bottoms of the 1, 8, and 2 line up on the small date, but not the large date. Other markers to tell if your 1982 cent is a small or large date:

The switch to the copper-clad zinc core cents in 1982 triggered massive hoarding of old Lincoln cents for their copper value. A lot of those pennies eventually made it back into circulation. If you’re lucky, maybe you will run across a small date 1982-D copper cent in a roll of pennies one day!

For other rare and valuable one-cent coins, check our countdown of the Ten Most Valuable Pennies.

What Are the Different Penny Erros and How Much Are They Worth?