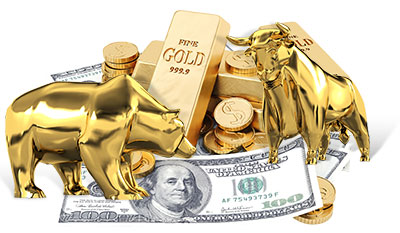 What will happen with the gold price in 2015? While gold is widely used to diversify portfolios and provide a hedge against inflationary forces, the burning question for medium-term investment is always, "Which way is the market going?"

This is undoubtedly a tricky question, one that constantly occupies the minds of many well-paid analysts and money managers. The problem with predicting what the gold market will look like is deciding what factors are most important. Rather than provide a single answer about how we think the gold market will perform in 2015, we've done something even better: we reached out to a wide array of personal finance experts and posed the question to them! We have compiled all of their answers to give you a broad overview of what the different opinions and expectations are for gold this year.

Instead of relying on one person's view wholesale, we've provided a sampling of expert opinions from across the industry to create a more complete picture of market sentiment for gold in 2015. Our respondents gave a variety of different outlooks for the gold market, from bearish responses to bullish responses, and everything in between. In addition to making predictions about what the gold market will look like throughout this year, our expert respondents have also offered their own reasoning as to why they believe this to be the case. Briefly, in descending order, here are their most frequently cited factors affecting gold this year.

These insights may help you formulate your own personal financial strategies; keep in mind, however, that our participants' answers are provided for general informational purposes only, and do not constitute professional investing advice.
Check out all of the different responses to our Expert Round-Up below!

Rather than 3 factors, I would rather just focus on how the majority of Wall St investment banks research is lazy (or more morally questionable than lazy) and only quotes the World Gold Council, CPM Group's numbers etc and doesn't fact check any of their figures with say Koos Jansen's research over at Bullion Star. Koos accurately tracks Shanghai Gold Exchange withdrawals and how tight the physical gold and physical silver markets are in terms of supply and why the paper price could not have gone much lower than it did in 2014. The last I heard from my contacts, Swiss refiners are still running 24/7/365 to recast older gold bars into new 1kg bars.

If metals prices had went lower or stayed around 2014 lows for months, many primary gold and primary silver miners were close to shutting down their mines and putting them on care and maintenance. The miners had burned through most of their cash on their balance sheets and large amounts of debt and equity were at punitive levels and simply not available in large enough quantities for many miners to keep their mines open and running at enormous losses.

In other words, there was about to be a potential supply shock or growing shortages for 8 figure or larger orders of gold and silver had the mines started to shut down. Primary silver miners make up ~25% of the global annual physical silver supply and only a handful of tiny primary silver miners in the entire world who produced less than 8 million oz of silver a year combined were making a profit mining silver at $16/oz. That's a lot of primary silver miners deeply in the red and running their mines at huge losses so that's simply not sustainable over the long term because unlike say the solar industry or corn ethanol which is 100% subsidized by the government and can run at enormous losses, miners eventually have to make a profit.

In my humble opinion, nearly all or all of the physical gold and physical silver miners pull out of the ground each year is basically already spoken for. That's how tight supply has been for the last few years yet the paper price was in a large cyclical bear market since 2011 and has not reflected the reality of supply and demand fundamentals. The market cannot ignore reality forever and with demand for physical gold and physical silver still extremely strong in Russia, Middle East, China, India, Asia, etc. Russia is putting almost 100% of their monthly trade surplus money into physical gold preparing for the next global financial system.

So the paper price going down and down every year was simply not sustainable given the real demand figures (again not the ones Wall St investment banks and the World Gold Council put out in research reports) we were seeing for physical metal coming out of the countries that are driving demand. The Western, US investor who tends to be educated in Keynesian Economics and brainwashed out of their common sense if they went to business school or watches CNBC or Bloomberg doesn't buy value and instead chases momentum as a trend trader has also ignored gold and silver since 2011.

Those US investor types have not been buying any metal since 2011 and probably also dumped their metal and/or have been shorting the paper price for gold, silver and miners. Sentiment levels became absurdly negative in 2014 as I believe they registered a zero (an all time low) from SentimentTrader.com. I am fairly confident gold and silver have put in their cyclical bear market bottom similar to the long and painful cyclical bear market bottom gold and silver experienced in 1974-1976 before resuming the secular bull market.

Globally, the US, Japan, UK, EU, etc are still trying to solve a debt problem with more debt. No government has really done the right thing for their long term economic health. Gold and silver still have major tailwinds as insurance to protect people's savings and their portfolios from financial repression and theft of purchasing power by all world governments addicted to rent seeking Keynesian Economics

I don't really view it as a bull market in gold and silver so much as a bear market in paper currency. Gold had a pretty flat year against the US dollar in 2014, but a strong year against pretty much every other paper currency. Why? Because, like the dollar, gold is starting to be viewed as a safe haven again.

But when you see a paper currency based financial system where interest rates are negative in real terms (US) or even nominal terms (Europe), mountains upon mountains of debt have accumulated in the "rich" west, and entire banking systems that are borderline insolvent, it's clear that the wheels are coming off the bus.

There aren't too many places to hold savings outside of this system in a liquid, portable, widely accepted form other than precious metals... or digital currency.

I have been influenced by Ben Hunt’s work on how narratives drive market as much as fundamentals. The first key factor for 2015 is that the narrative that gold is (was) in a bear market I believe is broken and gold’s recent strength has shifted the story to gold having formed a firm bottom. Second, the idea that central bankers are, and can, control the markets to “manage” it better than the free market had its first blow with the Swiss giving up its peg, followed by the change in Greece questioning whether the ECB can hold the Euro together. The resulting uncertainty has certainly been driving gold recently. The final factor that is still working against gold is the idea that the US economy is OK and the US will raise rates. Whether the Fed makes that move, and how that is perceived by the market, could provide a tipping point for gold to move higher in 2015.

My hunch is that three factors that are going to contribute the most to gold fluctuations in 2015.

We do not offer financial advise. Obviously the policies of central banks is crucial. They impact interest rates, currency values, and the real economy. In a fiat money regime, I am personally a perma bull on precious metals. I recommend them to my friends and family and encourage people to find a way to regularly purchase them as an important form of savings and as protection against personal or economy-wide problems.

I believe gold does well when there is:

I don't see much of any of those three in 2015, although there is an outside chance that Greece leaves the euro, which might cause some turmoil. On balance I don't see gold as a great investment in 2015, with the caveat that it's really hard to predict gold price fluctuations.

The level of real interest rates.

The one major short-to-intermediate-term factor is real interest rates – if you can forecast that, you know which way gold will go.

I would watch the U.S. dollar. A renewed weakening of the economy likely will raise concerns about Fed policy, which would tend to hit the dollar, sparking renewed inflation worries and higher prices for precious metals.

Both the gold and silver markets have been bears for the better part of the last three years. I think you'll see an end to this at some point in time in 2015, at which point they'll begin to rise. The factors contributing to this are the Fed raising interest rates (expected to happen at some point in time in 2015), rising demand (as predicted by HSBC), and continued global instability, which usually correlates with a rise in precious metals prices.

As you can see, many of our experts believe gold will be in a bull market in 2015. In light of several concerning macroeconomic trends, from aggressively accommodative monetary policies to the expectations for lower energy demand, they think gold could provide a safe haven from the uncertainty of the global markets. This doesn't even account for the ongoing crises in Greece in Ukraine. At the same time, several of our experts feel that chronically low inflation, a possible rise in the equities markets, and a robust dollar will keep gold down this year as world markets—particularly emerging markets and the United States—begin to recover from the Great Recession. We would like to thank all of our esteemed participants for their helpful responses. Whether gold will be in a bear or bull market in 2015 remains to be seen, but our experts have provided an array of factors to consider when you are making that determination!

We advise you that prior performance cannot be used to predict future value of coins. In making any decision to buy coins you should view such decision strictly in context of purchasing such coins as a collector of coins and any investment advice should be obtained by your own financial expert.

All investments involve risks – coins and bullion are no exception. You are reminded that the coin market is volatile and coin prices will fluctuate. The value of a coin is affected by many economic factors, including the current market price of bullion and the perceived scarcity of the coins among other factors. Consequently, you can lose or gain on your principal and the resale value of your coin(s) may or may not be equal to the original purchase price. Therefore, investing in these coins may not be suitable for everyone. You should consult with your advisors to ensure you have adequate cash reserves and disposable income before considering a bullion or coin investment.