How To Spot Counterfeit Coins

As more people begin looking into buying gold or silver, one overriding question is, “what is the best way to spot fake coins and bars?” Detecting counterfeit coins or fake gold bars can be as easy as using a magnet or spotting obvious errors, but Chinese fakes are getting better as criminals based there acquire sophisticated equipment such as 3D scanners and CNC mills. 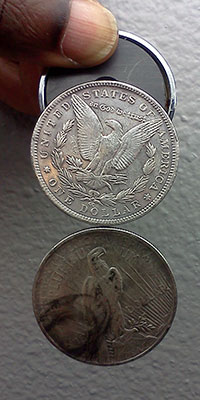 A fake Peace Dollar hanging from a fake Morgan Dollar which is stuck to a magnet.

The easiest test for counterfeit gold and silver is the magnet test. All it takes is a neodymium “super magnet” from a hobby store. You can also bust apart an old computer hard drive to get one. The magnet test is easy to do, anywhere you may be. Take the suspect coin or bar, incline it at a 45 degree angle, and put the magnet on it. It should slide right off gold, and will slowly slide off silver (due to silver's conductivity.) If the magnet sticks, it's a fake!

A quick test you can perform on silver coins is called the “ping test.” Striking or dropping a real silver coin on a hard surface will produce a characteristic ping. A modern clad coin, or a fake silver coin, will have make a dull sound. Once you've heard the sound a silver coin makes, you can recognize it easily. Note that this test won't tell you the difference in purity of a silver coin. It's just a quick and easy test to weed out obvious fakes. 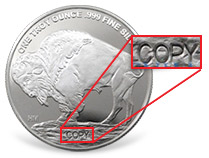 While a magnet sticking to the target means it's a fake, not sticking to the target doesn't necessarily mean it isn't a fake. If an item passes the magnet test, the next step is to carefully examine it. This is where having a known authentic sample of the item in question pays off. A magnifying glass or jeweler's loupe is vital when comparing a suspect item to a real one.

If the coin or bar in question passes the magnet test and visual inspection, it is time to weigh and measure it. It's easy to find a portable digital scale online that weighs in grams and troy ounces. Amazon is chock full of them. You want a scale that goes two places to the right of the decimal point. You also want a micrometer or calipers that measure in millimeters. They can be found almost anywhere from $10 and up.

Counterfeit coins and bars cannot have both the weight and dimensions correct. If the weight is right on a fake coin, the diameter or thickness must be wrong. If the diameter and/or thickness are correct, the weight will be wrong. Fake bars can be harder to spot this way. That is why it is important to have a known good example with you. One person was cheated by someone who sold him a fake PAMP gold bar. While it weighed 1 troy oz, you can see here that its size was closer to a silver bar than a gold bar. You can imagine how he felt when we showed him that the bar he bought off Craigslist was fake! 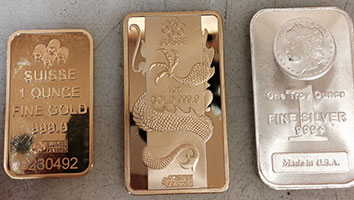 If you're still not convinced of the authenticity of an item after these three tests, it's better to just walk away. Especially with gold, there is just too much money involved to “roll the dice” on a questionable purchase. When buying from an individual, watch for these warning signs:

Even though some mass counterfeiters are producing ever-more convincing fakes, there are a LOT of shoddy fakes out there as well. For coins, look for mistakes in the design, missing details, wrong fonts on the inscriptions, and a generally “soapy” or flat appearance. Look for very flat or uneven relief on the features of the coin. Also check for impossible dates, such as the famous fake 1906 American Silver Eagles (the Silver Eagle wasn't minted until 1986.)

Look for uneven reeding on the edge, or no reeding at all. Also look for seams on the edge, or places where sprue was filed off from cast fakes. Federal law now mandates that any item replicating an existing coin design have COPY stamped on it. Older replica coins would have an R (for replica) stamped on them. Unscrupulous people may try to hide the COPY stamp, like below:

While more accurate than the above methods, the following tests take more preparation or money, or are destructive. This generally doesn't lend them being used “on the road” when buying precious metals, but can be used at home to test suspected fake coins or bars.

The predecessor to the acid test, the touchstone test, is credited with allowing the establishment of a coin-based monetary system in ancient times. Today, the touchstone is used along with various concentrations of nitric acid and aqua regia (a mixture of nitric and hydrochloric acid) to determine the purity of gold. This requires scratching the gold on the stone, or filing a notch in the item to defeat attempts at passing off plated items as pure. Acid kits for silver or gold are readily available, but dangerous to use.

The specific gravity test relies on the density of known purities of precious metals to detect base metal additions to coins and bars. This test requires a very accurate scale (at least to .01grams,) a cup of distilled water, some thin thread, and a chart of specific gravity values. Note that without laboratory-quality equipment, readings will have a margin of error that make this test unsuitable for finding purity of gold or silver. Use the specific gravity test as a non-destructive way to check if an item is plated, instead of solid gold or silver.

How To Conduct a Specific Gravity Test

Firstly, weigh the coin or bar in question. Next, fill the cup with enough distilled water to completely submerge the item, without it touching the bottom or any sides. Tare (zero out) the scale so it reads 0.00. Use the thread to make a loop to hold the item, and lower it gently into the water until it is completely submerged. Check for any air bubbles caught under the item.

You will notice that the water level rises, and the scale reads additional weight has been added. Divide that number into the “dry weight” obtained in the first step. Consult your chart. Pure gold has a specific gravity of 19.3. Pure silver has a SG of 10.49. Here is a specific gravity chart for various coins.

Mints in 19th/early 20th centuries did not care too much what trace elements were present, as long as weight and silver content fell within allowable parameters. This can cause fluctuations in specific gravity readings of older coins, and is why alloys are often listed with a range of SG values that can overlap a neighboring category. 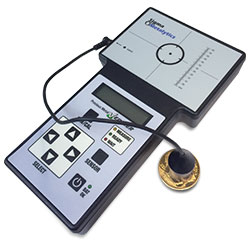 For many years, the only non-destructive professional metal tester was an X Ray Fluorescence (XRF) machine. Portable versions still cost $10,000 or more, and cannot see through anything but the thinnest of plating to analyze the core of an item.

A new type of machine from Sigma Metalytics, called the Precious Metal Verifier (PMV) uses the known resistivity of common precious metal coins and bars to give a reading in one second or less, with no acids, gels, or filing of the item. The PMV can “see” 2mm or more deep into suspect items to thwart attempts to pass off plated items as genuine. The PMV costs 1/10th the price of the average XRF gun, placing it within the reach of consumers.

The #1 way to protect yourself from fake gold or silver

The absolute best way to protect yourself from counterfeit coins is to buy from an established dealer with an A+ rating with the Better Business Bureau, like Gainesville Coins.