Gold catapulted Australia from a sparsely-populated penal colony perpetually on the brink of failure to a vibrant land of bustling commerce with world-class cities, in only 20 years. During that time, despite competition from the famous California Gold Rush, Australia supplied one-third of the world's gold output.

Gold was actually discovered “Down Under” in 1823, more than two decades before California's “Miner '49ers” began their stampede to America's Pacific coast. But since the population of the small towns was mostly made up of hardened criminals that had been sent to Australia as punishment, officials kept the news quiet. They not only feared a collapse of the colony due to farmers leaving their fields to hunt gold, they feared for their lives if the convicts rose up in rebellion.

In 1841, the Reverend W. B. Clark, an amateur geologist, showed a gold nugget he had discovered to colonial governor George Gipps, who exclaimed “Put it away, Mr. Clark, or we shall all have our throats cut!” Not an unreasonable sentiment, in a settlement where convicts were sentenced to forced labor, including work as human “plow teams” on farms.

The depopulation that officials feared occurred in 1849, but it was the California gold fields of the American West that drained the workforce, not Australian gold. In an effort to keep workers in Australia, officials began promoting gold discoveries. 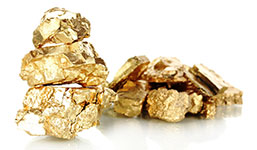 In 1851, Edward Hargraves, a former California gold miner who had returned to Australia, was awarded the vast sum of £10,000 for the discovery of a “payable” gold field in New South Wales. By the end of the year, 10,000 fortune hunters were feverishly digging in the gold fields. The next year, over 26 metric tons of gold was unearthed in New South Wales alone.

This first gold rush in Australia was followed by an even larger gold rush six months later, in the neighboring province of Victoria. Between the years 1851 and 1871, the total population of Australia almost quadrupled, from 430,000 to 1.7 million! The capital of Victoria, Melbourne, was called the richest city in the world, due to all the gold (and money earned from selling gold) that flooded the city. Because everyone wanted to strike it rich in the gold fields, wages in the city rose to be the highest in the world. Melbourne also grew to be the second-largest city in the British Empire.

The gold deposits of Australia were noted for their exceptional purity, with some nuggets coming straight out of the ground as pure as 22 or 23 karats. They were also known for their size. According to the Melbourne Herald Sun, eight of the ten largest gold nuggets ever discovered have come from Australian gold fields.

Among those famous nuggets are:

The discovery of giant nuggets didn't end in the 1800s. Several famous gold nuggets have been found in the modern era, and as the price and popularity of metal detectors grows, many more discoveries are being found in areas thought to have been picked clean 100 years ago. 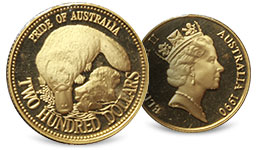 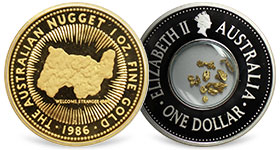 With the pivotal role gold played in the birth of Australia, it should be no surprise that these famous nuggets became the theme for the nation's first gold bullion coin. The Perth Mint, which was formerly a branch of the Royal Mint established in 1899 to process the bounty of the Coolgardie and Kalgoorlie goldfield of Western Australia, was tapped to make the coins.

The Australian Gold Nugget series began in 1986, with a four-coin proof set. These were the first gold coins to carry the “P” mintmark of the Perth Mint since Britain dropped the gold standard in 1931.

The 1 oz coin featured the “Welcome Stranger” nugget, the 1/2oz coin showcased the “Hand of Faith” nugget, the 1/4oz coin had the “Golden Eagle” nugget as its reverse, and the 1/10oz coin had the “Little Hero” nugget. These designs became the standard for the bullion version, which was launched the next year, while the proof gold coin set featured new designs.

In 1987, a bullion version of the Gold Nugget was introduced, standardized using the designs from the 1986 proof coins. The proof continued to have new designs each year. 1987 featured the “Poseidon,” “Bobby Dazzler,” “Fathers Day,” and “Golden Aussie” nuggets, and in 1988, “Pride of Australia,” “Welcome,” “Ruby Well,” and “Jubilee” had their day in the sun.

The Birth of the Gold Kangaroo

1989 marked a change for the Australian Gold Nugget, as kangaroos replaced gold nuggets on the reverse of the proof sets. The original design, featuring a Red Kangaroo in a sunburst, was the work of Dr Stuart Devlin AO CMG, goldsmith and jeweler to Her Majesty Queen Elizabeth II.

The bullion Gold Nuggets continued with the 1986 nugget designs for one more year, before switching over to the kangaroo designs in 1990. This year also marked the debut of the 1/20 troy ounce coin, making the Australian Nugget the first five-coin gold bullion proof set. 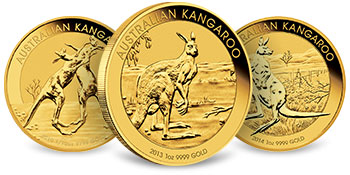 1991 saw the introduction of the 2 oz, 10 oz, and massive 1 kilogram Gold Nugget coins. These coins retained the old name of “Gold Nugget” and original Red Kangaroo design, while the 1 oz and smaller coins became the Kangaroo and had changing kangaroo images.

In 2012, spurred by the Royal Canadian Mint's production of the world's largest bullion coin, which weighed 100 kilograms, Perth Mint struck a fine gold coin ten times larger. This one metric tonne (1000kg) coin carries a $1 million face value. One metric tonne converts to 32,151 troy ounces of gold content! One wonders what the hardscrabble “diggers” of the Australian Gold Rush would have thought about this coin!