The Indian Head penny was struck by the United States Mint from 1859 through 1909, replacing the Flying Eagle cent design. It became one of the most widely collected coins in American numismatic history.

Today, the Indian Head cent remains arguably one of the most popular 19th-century coins. It is still enthusiastically embraced even by young collectors born decades after Indian Head pennies faded from circulation in the 1940s, ‘50s, and ‘60s.

One aspect of the Indian Head cent that helps bolster the coin’s status as a popular collectible is its accessibility. Many Indian Head pennies can be bought for only a dollar or two in well-worn grades. Most issues trade for less than $30 in circulated condition.

But, like every series, the Indian Head cent has its key dates. These are the coins we’re going to focus on in this article.

The Indian Head penny offers a number of dates that are considered scarce. The two business strikes that rank as the rarest are the 1877 and 1909-S. 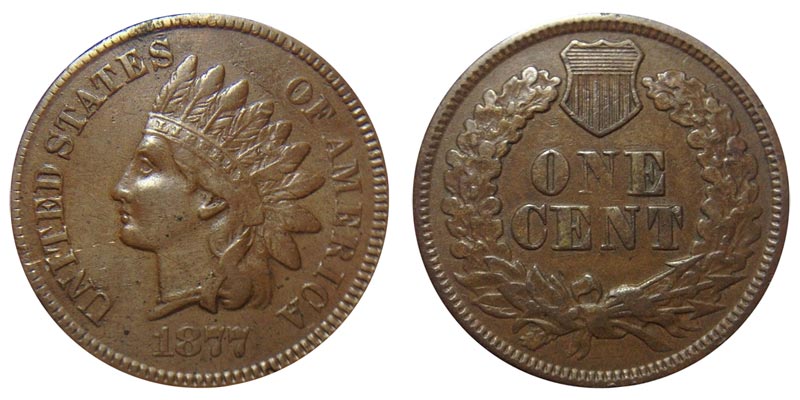 The 1877 Indian Head penny is one of only two business strikes in the series that saw a mintage of less than 1 million. But that information alone doesn’t tell the whole story behind why this coin is so rare and sought-after.

The 1877 penny was struck at the Philadelphia Mint and saw heavy use during its time in circulation. The number of collectible survivors is likely only a few percent of the original mint output. This means that a tiny fraction of specimens exist for collectors today.

Nicer specimens are increasingly challenging to find the higher on the grading spectrum one goes on their search for this coin, and with that comes steeper prices. Uncirculated examples start in the neighborhood of $4,500 to $5,000. Meanwhile the small number of Red Mint State 1877 Indian Head cents generally trade for about $7,500 and up. 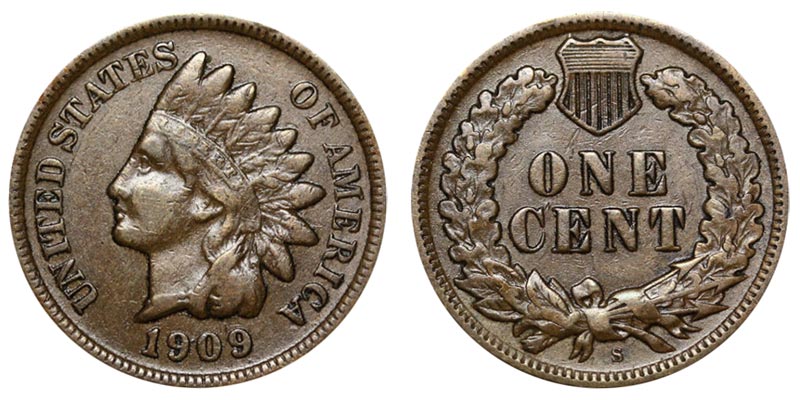 In 1906, revisions to United States Mint coinage law permitted branch mints to produce low-denomination base-metal coins, such as the bronze one-cent coin. Two years after the passage of this law, the 1908-S Indian Head cent was struck at the San Francisco branch mint. One year later, in 1909, the San Francisco Mint again struck the Indian Head cent.

However, 1909 was a transitional period for the penny, and production was split between making Indian Head cents and Lincoln cents. As a result, both types saw relatively low mintage figures at the San Francisco Mint.

The 1909-S Indian Head penny shares key-date status with the 1877 Indian Head cent, which has the higher mintage and loftier values. Meanwhile, the 1909-S boasts a lower mintage but also somewhat softer pricing. These dynamics are due in part to overall availability in the marketplace, demand, and the like.

To be sure, both the 1877 and 1909-S Indian Head cent are of great importance to series enthusiasts. Both are necessary additions to any set that aims for a complete representation of all business-strike date and mintmark combinations.

While the 1877 and 1909-S Indian Head cents are the series keys, other issues are scarce even in the lower grades.

For example, the first-year issue from 1859 enjoys perennial popularity. It sees somewhat higher values due to increased demand for the date. The 1859 Indian Head penny offers similar supply levels as more obscure issues.

The 1861 Indian Head cent also bears a popular date, given its production during the first year of the Civil War. Both the 1859 and 1861 can be had for less than $25 in lower circulated grades but trade for much more in better states or preservation. 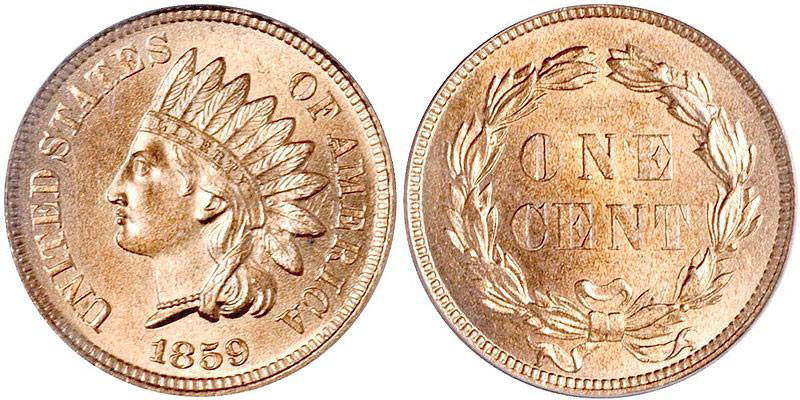 Midway through 1864, the initial “L” for Indian Head cent designer James B. Longacre was added to the ribbon near the lower head feathers on the obverse. This created two varieties in 1864: “No L” and “With L.” The No L is the more common of the two, with the “With L” a scarcer variety that goes for around $50 and up in circulated grades.

As almost any Indian Head cent series connoisseur would attest, every date issued between 1866 and 1878 is challenging to find in any grade. As a group, these Indian Head pennies are among the scarcest and most expensive across the board. That run of Indian Head cents also encompasses some sought-after varieties, including the 1873 Doubled Liberty. This doubled die coin starts at more than $150 in a grade of Good-4

Indian Head cents from 1880 on are generally much more common. They can be had for relatively inexpensive prices on up through Mint State-60 Brown. Prices are usually less than $100 even at the prestigious uncirculated level. Of course, there are exceptions, as is previously noted with the key-date 1909-S that came along at the tail end of the series.

Not to be left out of the conversation is the last year 1909 Philadelphia Indian Head cent, no slouch pricewise at $10 and up in Good-4. Meanwhile, all proof Indian Head cents from any point in the series are categorically scarce and trade for a minimum of $100.

As mentioned above the Indian Head design was created by Mint Chief Engraver James Barton Longacre. Longacre also designed its predecessor, the Flying Eagle penny. This was the first of the mint's "small cents" to carry a one cent face value. They were composed of 88% copper and 12% nickel.

The Indian Head type was the first U.S. coin to feature Native American imagery. However, the image created by Longacre is actually Lady Liberty wearing an Indian headdress. This theme would be used again later on $10 gold coins called Gold Eagles.

Beginning in 1860, the second variety of the design added a shield at the top of the reverse design. During his time at the mint, Longacre also designed the first gold dollars, the $20 double eagle, the silver 3-cent coin, and the $3 gold piece. In addition, he altered aspects of the Seated Liberty design used across silver coinage created by the preceding Chief Engraver, Christian Gobrecht. 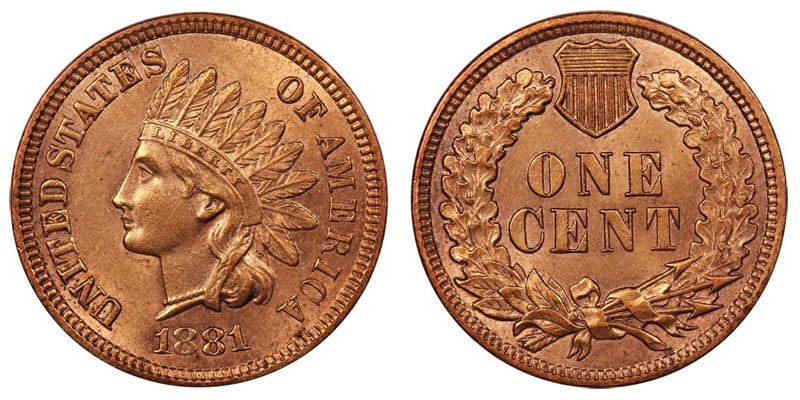 The 1881 Indian Head cent is among the most common dates. Image: USA CoinBook

Coin values for uncirculated (mint state) examples are often higher than the prices quoted above. Although not traditionally thought of as a rare coin, the Indian Head penny is worth consideration by collectors.

Like the 1873 Indian Head with a doubled die error, another important error is the 1888 Indian Head overdate. The last "8" in the date was punched over a "7" from the previous year. This may be the most valuable Indian Head cent known. Prices can reach into five figures at auction.

More information about key date coins from the authors at Gainesville Coins: