A new auction record has been set for the most valuable ancient gold coin ever sold in a public transaction. A gold aureus from ancient Rome garnered a winning bid of over $4.1 million at the end of October.

The coin was authenticated and graded by Numismatic Guaranty Corporation (NGC), one of the two leading third-party grading services. NGC is based in Sarasota, Florida.

This coin is not merely very old and made of gold. If that was the whole story, it would certainly still be a valuable coin, but nowhere near it's seven-figure strike price. So let's talk about what makes this coin special.

First of all, this gold coin is an exceptionally rare type. Only three are known to exist! Moreover, this example has a particularly strong strike that resulted in a grade of Mint State from NGC with an additional designation about its incredible appeal.

But that's not all. The gold aureus was an especially important coin in the ancient world. You can essentially think of the aureus as the Roman Empire's flagship gold coin, later replaced by the gold solidus. This specific type of aureus, referred to as the "EID MAR" due to its Latin inscription, has a fascinating historical provenance.

The coin was minted at the direction of Marcus Brutus, infamously remembered in history books as one of Julius Caesar's assassins. Incredibly, the design of the coin basically commemorates the assassination!

The obverse design features a pair of daggers, the weapons used to murder the emperor. Below is the aforementioned inscription "EID MAR," which translates to "ides of March." This phrase has become legendary as a reference to the death of Julius Caesar, which happened during mid-March in the year 44 BCE. 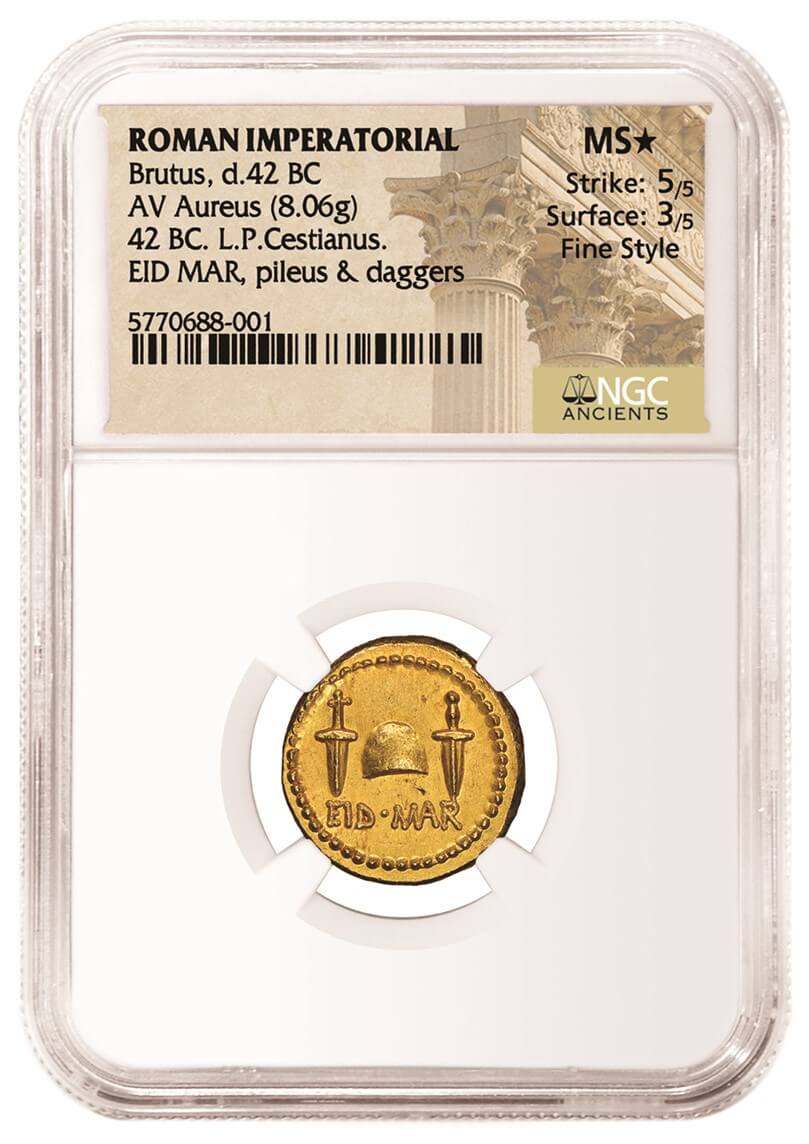 After a failed military campaign to take control of Rome, Brutus ended up taking his own life shortly thereafter.

The Staying Power of Gold

Each gold aureus coin weighed 8 grams, and was roughly the size of a modern nickel coin. In terms of size and fine gold content, this means the aureus was very similar to the standard gold coins of the 19th century: the British Gold Sovereign, the 20 Franc gold coins of continental Europe, and the Half Eagle gold coin of the United States.

Think about that: Despite more than 2,000 years passing between the two periods, the size and weight of a standard gold coin remained rather constant! It's a testament to the consistency in the purchasing power of gold over long periods of time.

For more information on this amazing ancient gold coin, you can check out this local news article from the Sarasota Herald-Tribune and the press release from NGC.