The Roosevelt dime has long been a familiar fixture in United States coinage. They were released into circulation on January 30, 1946. This was many months after the death of four-term President Franklin Delano Roosevelt on April 12, 1945, who the coin honors.

The dime was chosen as the canvas for the Roosevelt design by Chief Engraver of the United States Mint John R. Sinnock. The denomination became symbolically linked to Roosevelt due to his longtime battle with polio. The March of Dimes foundation was initially founded as a way to raise money to combat this disease. 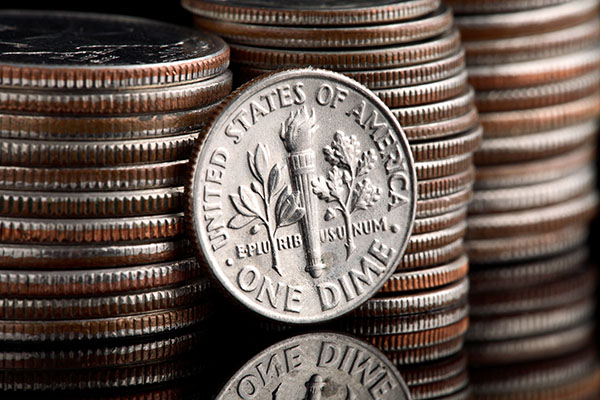 Replacing the Mercury (or “Winged Liberty Head”) dime, the Roosevelt dime began its life as a 90% silver circulating issue. (The rest of the alloy was 10% copper.) This continued until rising bullion prices forced the United States Mint to remove the precious metal content from the coin.

So, in 1965 the composition of the dime was changed to copper-nickel clad. This is the same metallic content used to make dimes today. However, the United States Mint still strikes silver dimes expressly for coin collectors, and these are sold in special coin sets.

But how much are Roosevelt dimes worth? What are the rare pieces that collectors should look for? And what are some of the most common ways hobbyists collect these dimes? Find these answers and a full price chart below.

Although the Roosevelt dime series has been in continuous production since 1946, few valuable rarities have come along during that time. There are conditional rarities, though even these aren’t anything unusual. Every series contains several dates that become conditional rarities at some point on the coin grading spectrum. 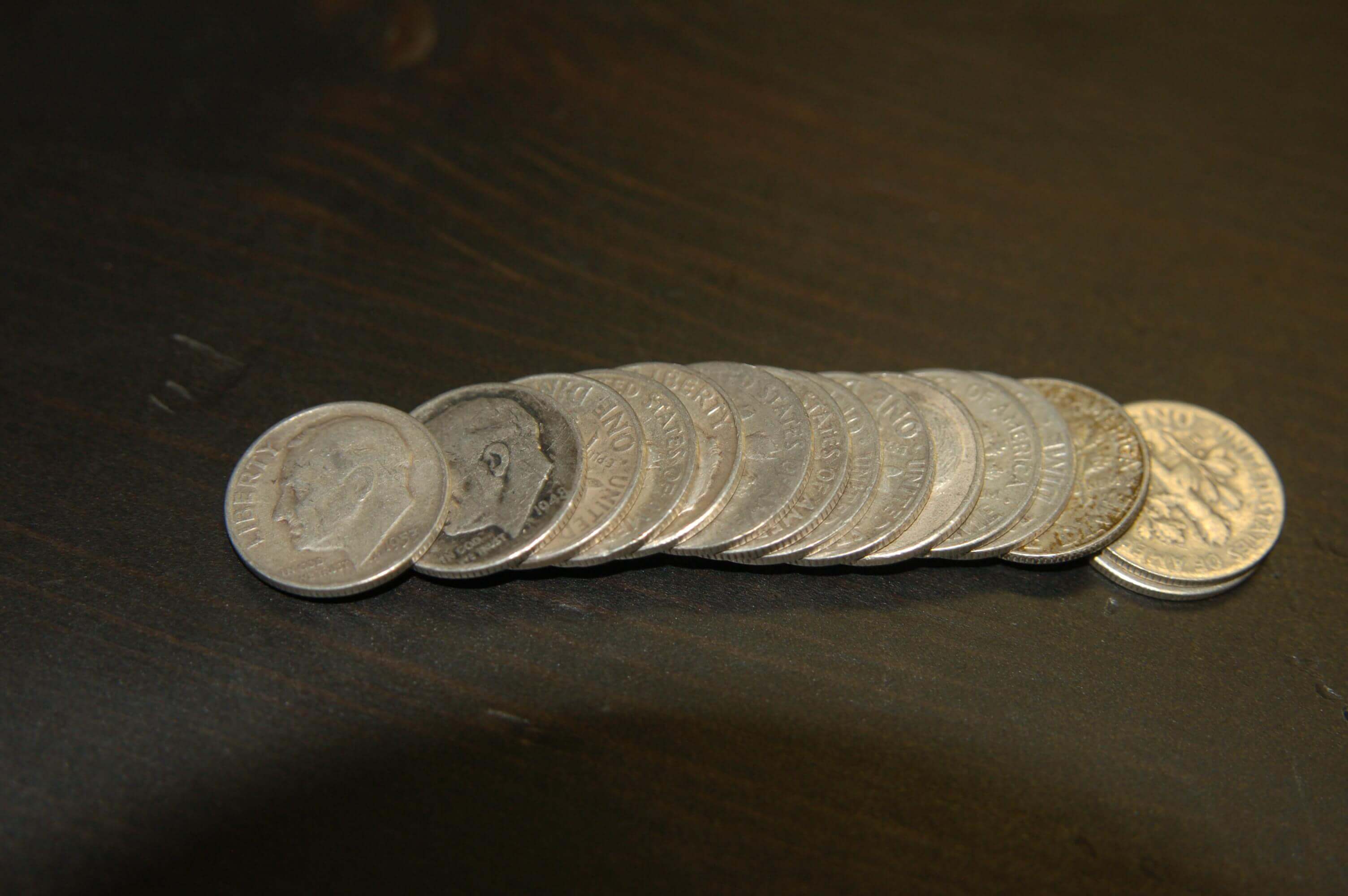 Then there are the Full Bands Roosevelt dimes. These have an exceptionally strong strike. As a result, they exhibit complete horizontal lines in the bands around the torch on the reverse when kept in uncirculated (mint state) condition.

Not all Full Bands examples are necessarily rare. They are generally deemed more desirable to collectors than pieces showing softer strikes and incomplete details.

As for scarce dates and varieties, there are a few pieces for which collectors vie. These include the 1949, 1949-D, and 1949-S dimes, which aren’t really rare coins in circulated grades. They are though tougher in the Choice and Gem Uncirculated grade level. These, along with the 1951-S in uncirculated, are the only regular-issue business strikes that garner much buzz as far as tougher dates go.

There are several varieties worth looking for among the pre-1965 Roosevelt dimes. These include the 1960 doubled die obverse and the reverse doubled dies on the 1963 and 1964-D. 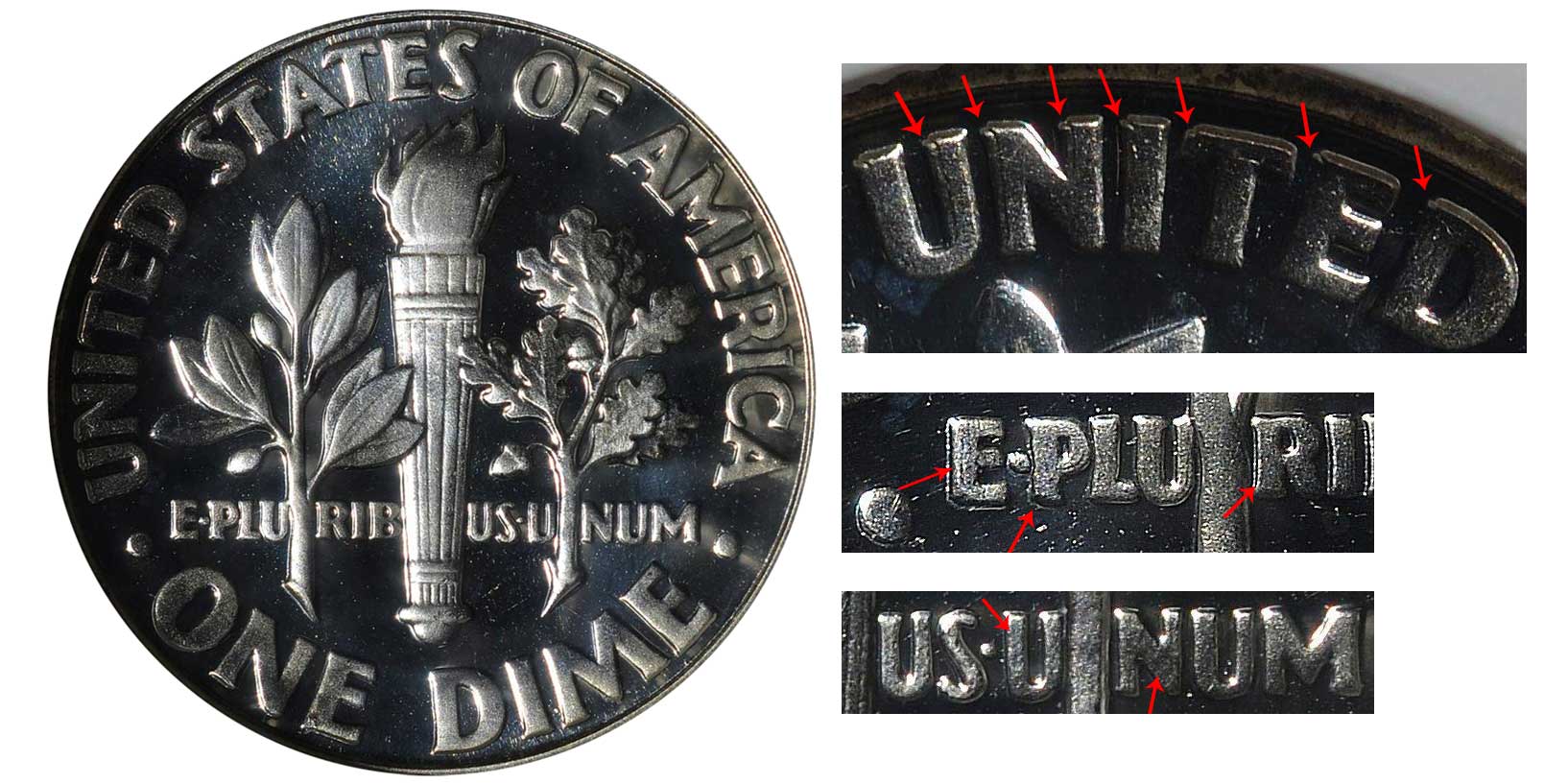 Several interesting missing mintmark varieties are worth significant sums. Among them are:

All except the 1982 no-P are proof-only pieces.

Another interesting notable among these scarcer dimes is the 1996-W. This date was struck in rather small quantities. It was only included in 1996 United States Mint uncirculated sets. These pieces mark the 50th anniversary of the Roosevelt dime. They were also the first business-strike examples of a regularly circulating coin to bear the "W" mint mark from the West Point Mint. 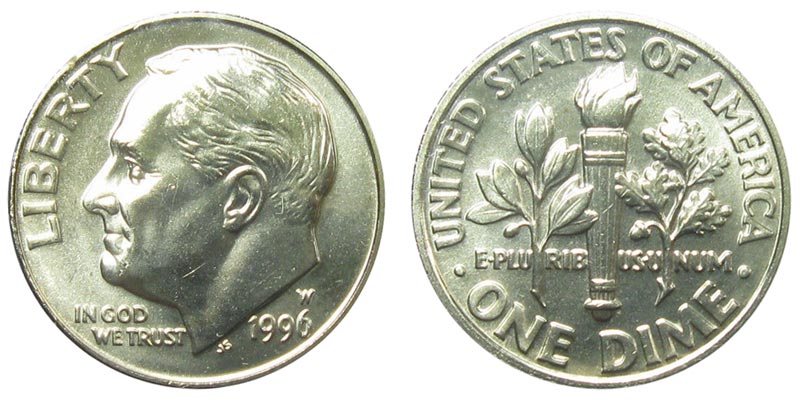 What Are Roosevelt Dimes Worth?

For the most part, Roosevelt dime values are relatively uniform year to year. The most essential thing for collectors and investors to remember is that all pre-1965 Roosevelt dimes contain 90% silver. Also, circulated examples are generally worth their spot value—i.e. their melt value.

You need to know how much silver is in a Roosevelt dime to calculate its melt value. All 90% silver dimes contain roughly 0.07234 troy ounce of pure silver. That's about 2.25 grams of silver.

Except for errors and varieties, there is no circulated business-strike Roosevelt dime struck from 1946 through 1964 that is worth big bucks. The proof 90% silver Roosevelt dimes made since 1992 are also mostly worth consistent values year to year, with a few exceptions.

Roosevelt dime values are straightforward. If you want to find out what Roosevelt dimes are valuable, they are presented here in categories of various year ranges. Notable exceptions are granted their own value listings in the price chart below.

The Roosevelt dime is a highly popular series. Thus there are multiple folders, albums, and displays available that accommodate a handsome, organized arrangement of these coins. But deciding which path to pursue is entirely up to the collector. There are several tried-and-true options available for assembling a nice set of Roosevelt dimes.

The most challenging includes all regular-issue business strikes and proofs, along with the major varieties.

This set can easily break the six-figure mark! Especially with the inclusion of the several rare and pricey no-S proof varieties. These span from the late 1960s through the early 1980s.

Such a set is ever even attempted only by the most financially well-heeled and ardent of series specialists.

Another tough objective? Building a complete set consisting of only Full-Bands examples. Some dates are next to impossible to find with Full Bands details. Thus that goal could leave a collector on the search—and mission to complete this set—for many, many years. 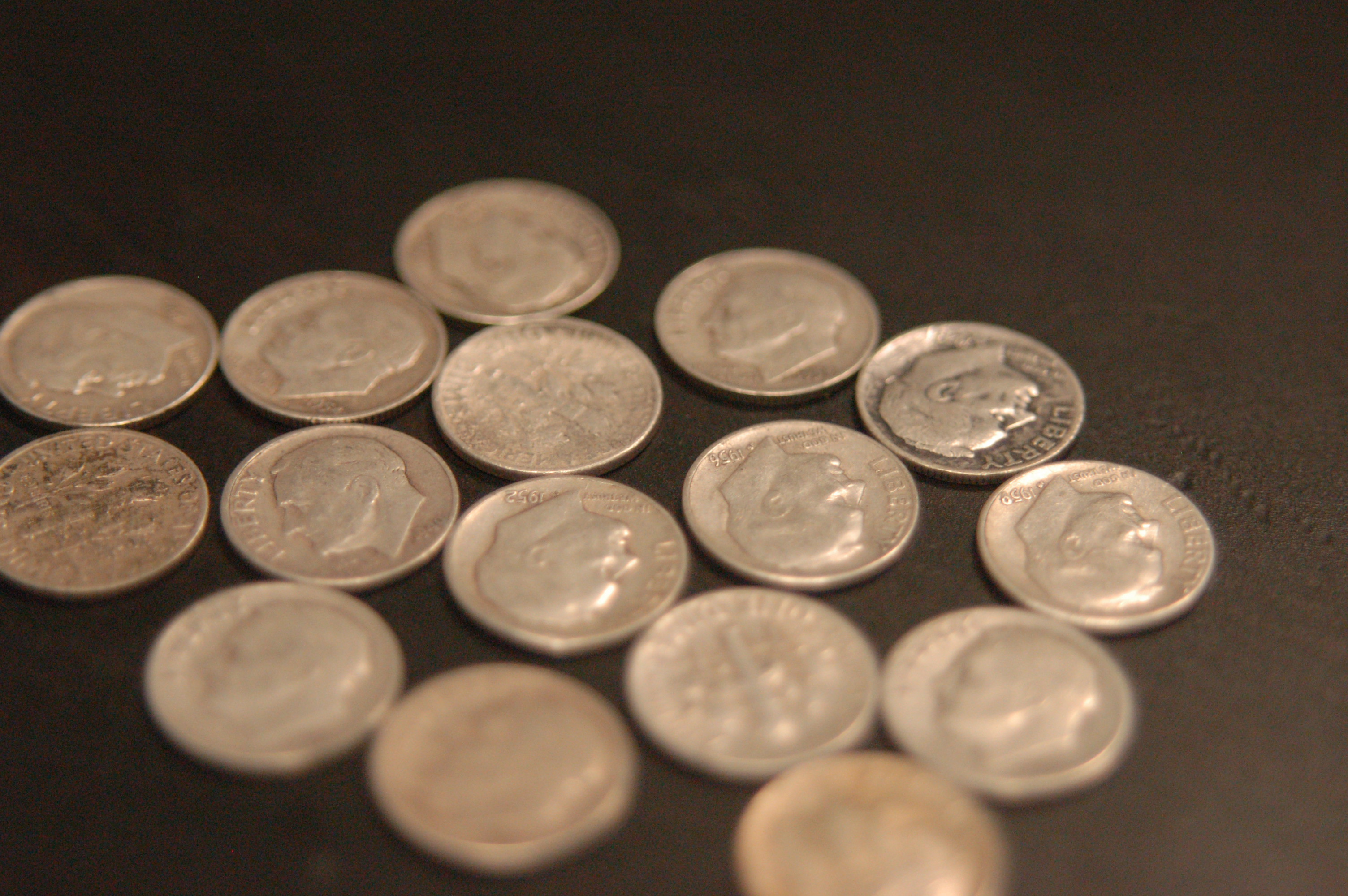 Perhaps the most common avenue for building a comprehensive Roosevelt dime collection entails collecting the regular-issue business strikes and proofs.

While this is a large set of well more than 200 coins, there are very few cost-prohibitive pieces involved. (If you disregard the varieties, that is, you can do so without breaking the bank.) If one avoids collecting the pre-1968 proofs, it’s possible to assemble this set for much less than $1,000. That's even with all coins grading either uncirculated or proof (no circulated examples).

Of course, if a collector wants to build a circulated set of Roosevelt dimes while averting the proofs and special mint issues, it’s possible to do so for less than $300. The circulated examples from 1946 through 1964 can be obtained for spot prices (more or less). Meanwhile, the dimes struck since 1965 can all be found in circulation. Indeed, it might take some searching to find all of the post-1964 Roosevelt dimes in circulation.

Many of these pieces have become relatively scarce in pocket change. This is especially true for specific issues struck from 1965 through 1983.

Regardless of the route one takes to collect Roosevelt dimes, all roads lead to fun. The series offers incredible challenges for those who seek the rarest varieties or the finest examples. Collectors desiring more affordable options may assemble a handsome set of regular-issue proofs and business strikes.

For more information about finding valuable Roosevelt dimes in circulation, check out our handy infographic below! 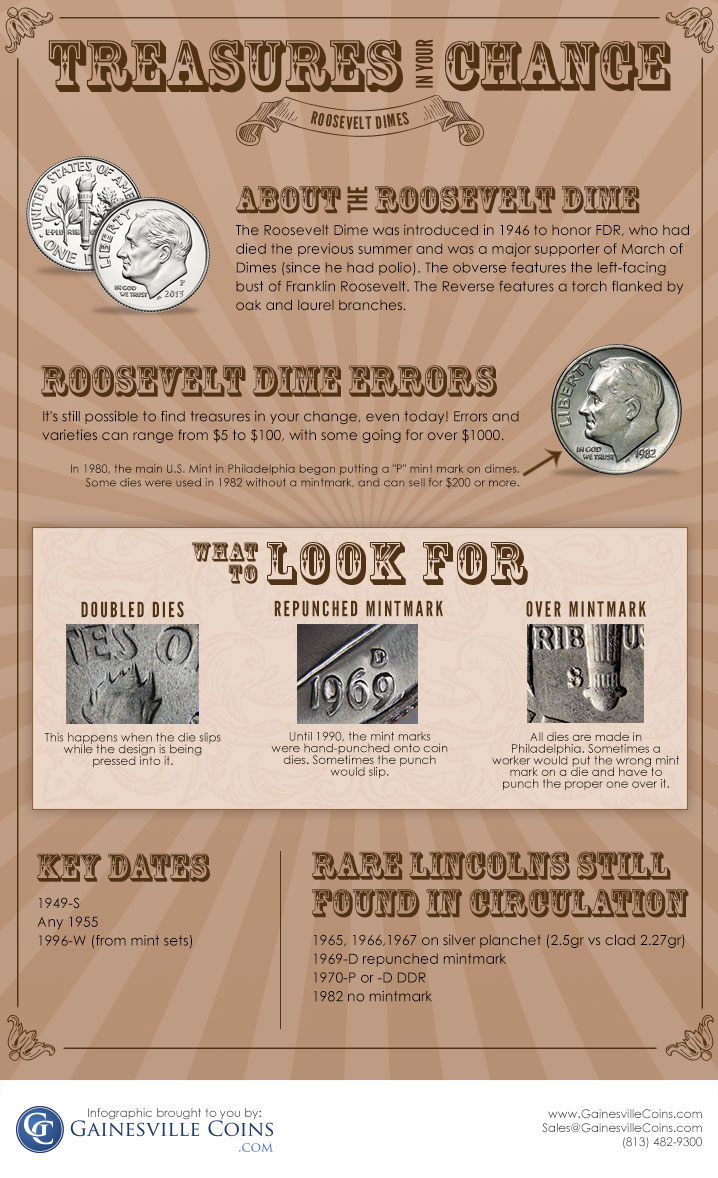 When it comes to Roosevelt dimes, the choices are endless, and opportunities abound.

If you want to go further in collecting silver dimes, these are the earlier designs and years of production:

What is the most expensive Roosevelt dime?

The extremely rare 1975-S proof Roosevelt dimes that are missing an S mintmark are currently the most expensive Roosevelt dime. These 1975 No-S proofs are error coins, and can sell for well into six-figures.

What is the rarest dime?

How much is a 1966 Rosevelt dime worth today?

The chart below shows the melt value for silver dimes depending on the price of 1 oz of silver in dollars, since it fluctuates:

Any rare or collectible coins will be worth more than the melt value.

Why is a dime so small?

So, the smallness of a dime reflects how much less 10 cents was worth as money—and in terms of silver—than 25 cents, 50 cents, or a dollar.

Are there any rare Roosevelt dimes?

In some cases, an otherwise common Roosevelt dime will be a "condition rarity" if it has the Full Bands designation. You can check out our article about the key-date Roosevelt dimes for further reading.

What dimes are worth keeping?

Any silver dime (i.e. all dimes made in 1964 or earlier) is definitely worth holding onto, as each of these coins is worth significantly more than their face value of 10 cents.

For a more detailed explanation of which dimes are worth money, follow the link.

How much silver is in a Roosevelt dime?

You can consult our article on how much a silver dime is worth for more information.

How Much Are Silver Dollars Worth?