Both the art world and the precious metals markets are abuzz with the news of a brazen pre-dawn art theft. This was no ordinary gold heist, though. The thieves nabbed an 18K solid gold... toilet from Blenheim Palace in the UK, only two days after its installation. A project by the disruptive Italian artist Maurizio Cattelan, the 235-pound solid gold pooper has a bullion value of $5 million (US). This appraisal does not include the "art value" of the bizarre piece of plumbing. 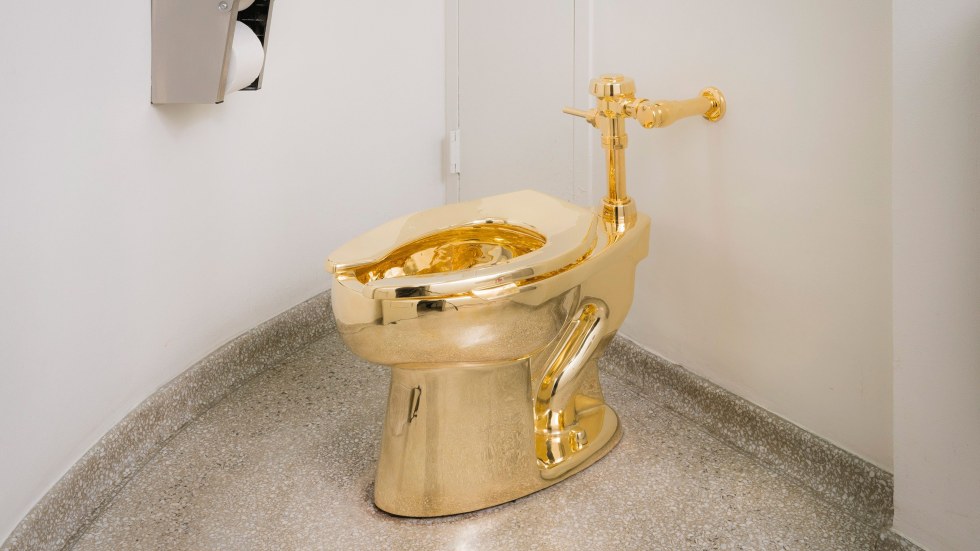 In an unconventional twist on audience-participation performance art, the public was invited to book three-minute sessions to "do their thing" in the toilet, which is fully functional. The toilet, named "America", was made in 2016 before the election of Donald Trump. Cattelan says that he made the gold toilet as a statement on the frivolous waste of riches by the billionaires and other "elites" that dominate the United States. The 18K commode was first installed at the Guggenheim Museum in New York City. In fact, the artist modeled his precious metal privy after the regular Kohler toilets in the museum's bathrooms.

Officials at Blenheim Palace, which is hosting an exhibition of several of Catellan's artworks, believed that the golden loo was safe from theft, since it was plumbed into the building. The sudden pre-dawn flooding of the palace near the water closet where it was installed proved this assumption false. Two suspects, one a 66yr-old man, the other aged 36, were soon arrested, and let out on bail while the investigation continues.

We are still actively searching for the stolen piece of artwork and there will be a continued police presence in and around the palace while this search continues. We believe a group of people used at least two vehicles during the burglary, which was reported to Thames Valley Police at 4:57 a.m. on Saturday.

Maurizio Catellan's reputation as a prankster in the art world required him to clarify that he was not behind the theft. The artist initially thought that he himself had been pranked:

"When this morning I was informed about the robbery I thought it was a prank and it took me a while, after a few checks, to come to the conclusion that it was true and it wasn't a surreal movie where instead of the jewels of the crown, the thieves went away with a b***** toilet," he said in a statement. "I always liked heist movies and finally I'm in one of them."

Blenheim Palace is famous as the ancestral home of the Dukes of Marlborough, and as the birthplace and childhood home of WWII Prime Minister Winston Churchill. Portions of the huge palace and grounds are open to the public. A UNESCO World Heritage Site, Blenheim Palace has hosted art exhibitions since 2014.