Looking for modern U.S. quarters worth money can seem daunting when there are so many “regular” state quarters in circulation that have no real additional value whatsoever. So, which ones are valuable?

To be sure, the vast majority of U.S. state quarters you’re going to find in pocket change are indeed worth only face value (worth 25 cents), mainly if they are worn. But some are rare and worth keeping, and here’s a rundown on which ones those are.

The first installment of the 50 State Quarters series offers collectors an exciting die variety with a whimsical name: the Spitting Horse.

What’s the Spitting Horse? Note the reverse of the 1999 Delaware Quarter, which depicts politician Caesar Rodney on his horse. It's an homage to the Founding Father’s 70-mile nighttime dash in a thunderstorm. He rode from Dover, Delaware to Philadelphia to break a deadlocked vote that led to the Declaration of Independence. 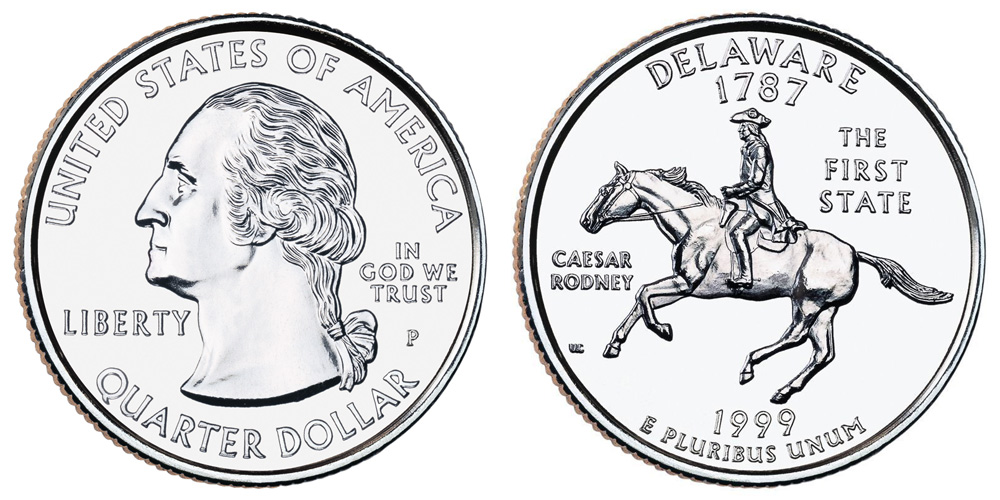 It’s unknown exactly how many of these errors were produced. (There is no published mintage for an error coin.) They at one point were considered rare state quarters and, upon their discovery, were selling for as much as $250 to $500.

Over the years, the 1999 Spitting Horse Delaware quarter has proven more common than initially thought. Interest in this coin has also waned some, dragging prices downward. But this fascinating variety still fetches $10 to $20.

The 2004-D Extra Leaf Wisconsin quarter offers not just one but two bizarre varieties. They are bizarre because these two varieties show two different forms of an extra leaf. Some numismatists speculate the extra leaf varieties may have been more an intentional addition rather than something of an accidental origin, such as a die break. 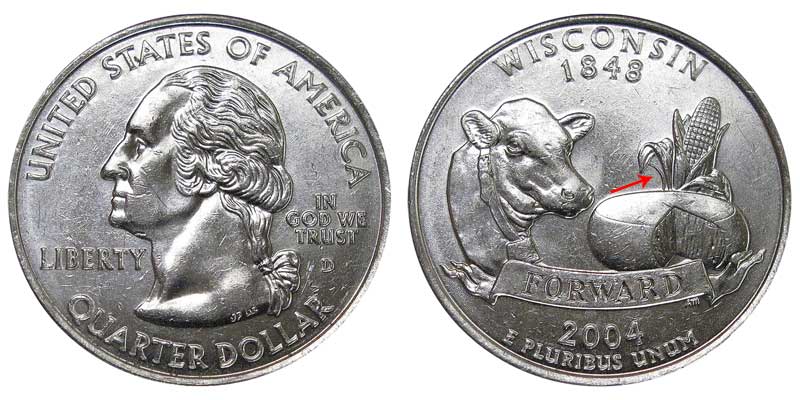 The “Extra Leaf” anomaly refers to two varieties known as the Extra High Leaf and Extra Low Leaf errors. Both refer to the appearance of a long leaf on the lower left of the corn stalk, between the main left leaf and the wheel of cheese.

These two varieties lit up the numismatic world when it was first discovered in the weeks after the coin’s release. They even made headlines on televised evening news programs. When news of the coins first hit the streets, they were trading for some $500 or even more.

But since the hype has tapered off a bit, so, too, have prices for these coins. These days, circulated examples of the Extra High Leaf realize closer to $65 while the Extra Low Leaf trades for around $50.

The 2005-P Minnesota quarters left their mark in the world of error and variety coin collecting. More than 60 varieties of doubled die stem from this single issue. They generally involve the appearance of an extra spruce tree(s) on the reverse of this coin, honoring the state nicknamed the Land of 10,000 Lakes. 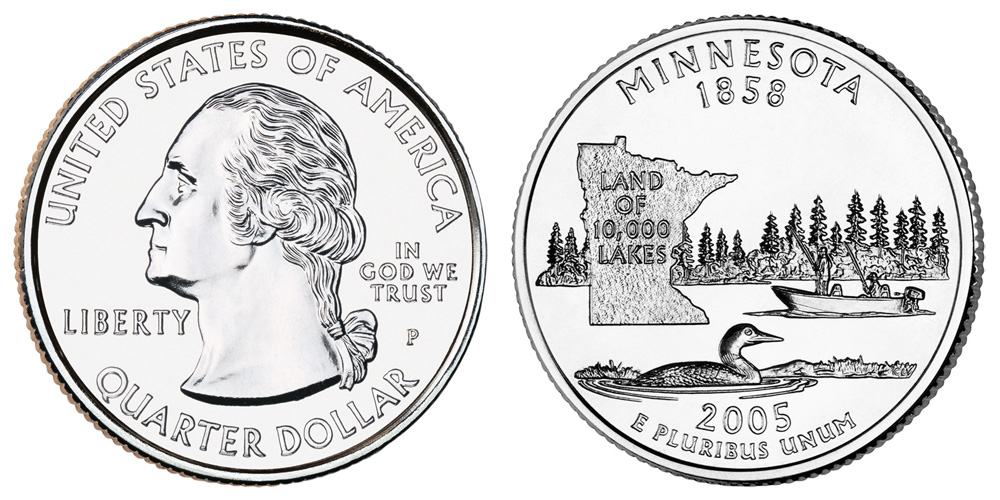 It’s impractical to do a deep dive on the diagnostics of the various dozens of known doubled dies for this single coin here in this article. Suffice it to say the most prominent of these doubling varieties can be attributed by looking for ghostlike outlines of an extra spruce tree around the third and fourth primary trees to the right of the large outline of the Minnesota state borders.

Values for the 2005-P Minnesota quarter vary markedly from one to the next. The most drastic and visible of the doubled dies trading for between $50 and $100. The more obscure doubled dies for this issue see lower coin values ranging from $5 to $25, depending on the magnitude of the doubled die and the physical condition of the coin.

Technically the 2009 District of Columbia quarter belongs to the six-coin Washington D.C. & U.S. Territories Quarters program. In 2009 it proceeded the 50 State Quarters program running from 1999 through 2008. The set included Puerto Rico, Guam, and other territories. Some of these coins were released by the United States Mint in special silver proof sets. 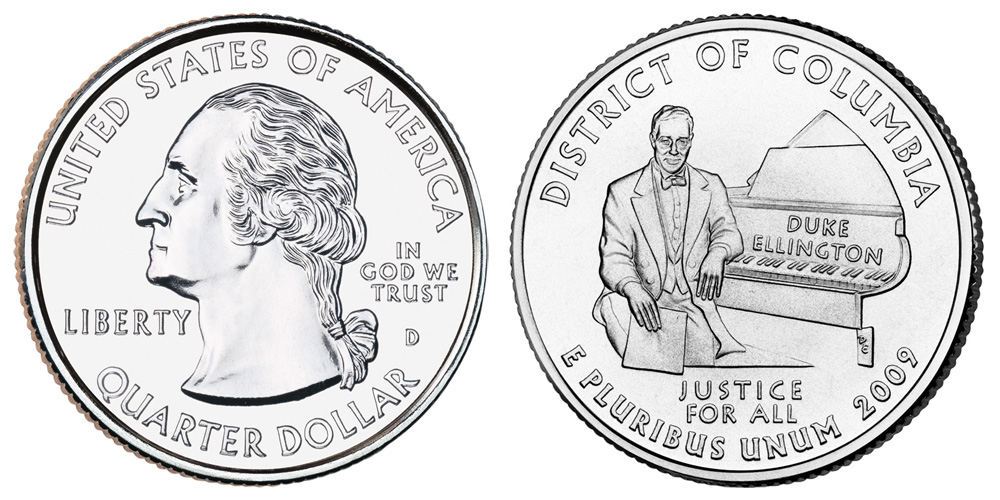 However, this one-year-only set of commemorative quarters is often collected alongside the classic state quarter series and thus sees an entry included here. The 2009 District of Columbia quarter features jazz composer and pianist Duke Ellington, seen on the quarter's reverse.

Some 2009-D District of Columbia quarters exhibit what Numismatic News called “the most dramatic doubled die in years." So, what is it? This doubled die features strong doubling of the letters “ELL” in Duke Ellington’s name. There is also doubling on some of the piano keys and other nearby elements.

The 2009-D District of Columbia doubled die quarters gained significant traction in the hobby. Many collectors found the coin in circulation and included it in sets of state quarters. When these 2009-D District of Columbia doubled dies first emerged in spring 2009, they were selling for many hundreds of dollars. Today, circulated examples tend to trade for closer to $75.

Every coin worth money on this list is a state quarter error coin. Unlike silver dollars or other old coins, each of the 50 State Quarters features an unique design. Their common obverse shows George Washington, technically making them all Washington quarters.

Below is a list of other key dates and rarities in the series. These are some of the most valuable U.S. quarters worth money. Visit USA CoinBook to view more state quarter values.

Why Everyone Is Searching for the Rare New 2019-W Quarter