Coin Experts Reveal Which Gold And Silver Coins They Covet Most

Coin Experts Reveal Which Coins They Covet Most of All 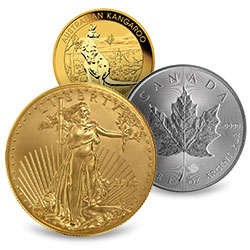 We wanted to know what the most coveted coins on the market are right now. So we asked 26 coin experts and dealers a simple question.

“If you could ONLY have 3 gold coins or silver coins, which would they be, and why?”

There are a large array of subfields within the coin industry: American numismatics, bullion, world coins, and ancients. So we wanted to compile a diverse sampling of what experts like to collect, and why. If you have a passion for coins, but don’t know where to start collecting, this is a good place to learn about the various subfields of numismatic and semi numismatic coins.

We’ve painstakingly compiled a list of some of the most knowledgeable people in the bullion and numismatic coin industries. So if you’d like to see what the real experts in the industry think, scroll down and we’ll show you.

Andy Lustig - Administrator for The Society of US Pattern Collectors
uspatterns.com

Even if my collection were going to consist of only three coins, I would want them to be related, and to form something of a complete "set". So my choices aren't necessarily my three favorite coins, or the three greatest coins in the world, but my choice of the best three coin "set" I can imagine. My set would be comprised of a 1907 $20 Ultra-High Relief, the small diameter, extra thick 1907 $20 Ultra-High Relief (J-1917), and the unique 1907 Indian Head $20 pattern (J-1905, formerly J-1776).

Germany 1905-F 1 Mark - one of the rarest, regular-issue German coins.

I choose gold coins because they're worth more ;-)

Off the top of my head, if I had to pick 3 silver coins for my collection I would pick:

If I had to pick 3 gold coins they would be:

If you only were looking for 3 coins total (and not 3 of each) then it would be:

I value history very much and the lessons that history will teach you, if you only take the time to absorb our past. In the same manner, I appreciate art and am a collector of that as well. These two passions have lead me on a search for early commemorative coins. Not only do they tell a history, but they are a fine example of artistry in coins issued by the United States. The first coin I would own is the 1923 Monroe Doctrine Centennial half dollar. If you look at the reverse of the coin, it depicts the continents of North and South America, but if you take a closer look, the forms of the continents appear to be two female figures. It is a true delight to review and learn the history of our county by simply collecting the commemorative coins issued between 1893 and 1954.

The second coin I would own is an 1889 Carson City Morgan Dollar. That is the most rare and high value of the Carson City dollars. The Carson City Mint produced a very limited amount of U.S. coins compared to the Philadelphia or Denver Mints. It is a joy to hunt for Carson City coinage at coins shows and antique and coin shops due to their rarity. To find a coin is to "score", as you will have to go through much stock before you find Carson City material, unless you are doing business with a large national dealer or you see the trademark blue government holders. Many of the smaller or circulated Carson City coins are very affordable.

The third coin I would have in my collection is a Saint-Gaudens Double Eagle. My father always stated that this was the most beautiful coin made by the U.S. Mint. My father, Jerome Wostyn, started me in coin collecting and gave me a 1924 $20 gold piece for Christmas one year, it was his birth year. That coin will eventually be passed down to my daughter.

The collecting of coins could be a hobby that would allow the collector to acquire an object that will appreciate in value, but the main goal should be the enjoyment of the experience of collecting, learning the history of our coinage, appreciating its artistry and accumulating the friends and experiences you will treasure due to your hunt for those coins.

If I could only have 3 silver or gold coins in my collection, they would certainly not be silver, they would only be gold. And they would not have any numismatic premium included in their price. I would want only unslabbed and highly-recognizable bullion coins. I prefer .9999 24K gold so, being American, I would probably go for three brand new 2014 Buffalos, preferably still attached to each other in the Mint's plastic sheet packaging. It looks like you have them for about 4% over spot which is a good price.

My 3 coins would be:

We asked several members here at the Beverly Hills Coin Club and out of 34 of today’s responses the choices were unanimous:

Since the above are rarely available, the other 3 most often given were:

For the first choice, I selected the 1991 Uncirculated Princess Victoria Kaiulani Gold Akahi Crown. The princess design is simply beautiful. This is a 1 ounce gold coin. The large "1" on the reverse is the marker that identifies the coin as an uncirculated specimen (mintage 55). Proofs specimens (mintage 400) replaces the "1" with and raised pad on the reverse in which the coin is serialized after striking. It's very hard to distinguish between the Royal Hawaiian Mint's uncirculated and proof strikes, so the identifier really helps.

For the second choice, I selected a relatively unknown silver medal that has Presidential provenance. The coin is virtually unknown to most collectors. In fact, there was only one instance where it was documented and it failed to identify the minter and mintage. I performed research on the medal and uncovered previously unreleased files from the Eisenhower Presidential Library and Museum. I used the research results to publish a book about the medal series. The book was released in February 2014 and is titled: The Dwight D. Eisenhower Appreciation Medals. ISBN 1495348229 and is available at Amazon. A total of 17 previously unknown medals were cataloged with exact mintage struck and later destroyed (at the end of Eisenhower's 2nd term in office). The US Mint at Philadelphia struck the entire series under direction from the White House. The specimen I selected from my collection is the same size and fineness as a Morgan or Peace silver dollar. Official White House and US Treasury memos state that only 400 of the Hawaii 1960 were struck and 105 destroyed. 28 are a permanent part of the Eisenhower Presidential Library and Museum. The available circulating population is 267.

For the third choice, I selected the 1941 - 1991 Pearl Harbor 10 mm Gold Coin with accompanying counter stamped 1991 Silver American Eagle. Both are by the Royal Hawaiian Mint. Actually, this is a single die pair used for two different purposes: to strike a gold coin and to counter stamp a coin. The mintage tells the story. The gold coin has a mintage of 24 and the counter stamped coin has a mintage is 10. (The image with 2 gold coins is actually of another gold coin that shares the same obverse die. Its full story can be read here.)

I hope that you find my selection interesting!

Well practically all the mohurs (gold coins of India) are restrikes, and the original strikes are not available so collecting mohurs is generally not considered a part of collection. Moreover we like to fill our collection with more number of missing coins rather than buy a single expensive and showy item like a mohur or a pattern coin which would cost me thousands of dollars. But since this one is a hypothetical question, I would go for William double mohur of 1835, 1939 rupee George VI and 1911 half rupee George V.

I considered only British India coinage and not princely state coinage since princely state mohurs are seldom seen or heard about, but they can be a better option than BI coinage as they are more fascinating.

I would chose 3 silver Philistian coins of the Persian Period.

Here are the 3 coins I would love to have in my collection:

Lastly, I believe its best to own mostly gold and silver bullion. There is a reason I choose two silver coins out of the total three... I believe silver will outperform gold in percentage terms in the future.

I would have to (albeit very difficult) choose the following three coins:

As you can see for my responses, to me coin collecting is more about the history, artistic merit and allure of the various coins from the United States Mint.

If I could only have 3 silver coins or gold coins in my collection what would they be?

Honorable Mention: Because it is not silver or gold, I would like to add as an honorable mention the 1955 Double-Die Obverse Lincoln cent. It is the one coin that spawned error collecting. There might be collectors of die varieties in different coins, but that is across a series. Only error collecting can trace its history to the issuance of one coin. Thankfully, I already own one of these!

Well, as far as coins I might actually have some chance of affording (excluding, say, an 1804 dollar) I would go with a high relief MCMVII Saint-Gaudens, an 1836 Gobrecht Dollar, and possibly a 1916 variety 1 Standing Liberty Quarter.

If I had only three coins, which I could have in my collection without thinking about what I could afford, these were the three: