What Do Coins at Gravestones Mean? - Gainesville Coins News

What Do Coins at Gravestones Mean?

Perhaps you've seen coins placed on the gravestones at a cemetery before and wondered what the significance of this loose change was. There are many different traditions that involve coins, especially as it pertains to the deceased or those who have served in the military.

The history of coins being used in funerary rituals traces back all the way to Ancient Greece. In Greek mythology, Charon was the "boatman" who carried the souls of the deceased across to the underworld. Traditionally, a low-denomination coin would be placed in the deceased's eyes or mouth as an offering to the god. Fittingly, these coins were known as "Charon's obols." Ancient coin expert Mike Markowitz for CoinWeek notes that this was far from the only such tradition involving coins and the dead in Ancient Greek culture; in other cases, coins were left with corpses or their ashes, presumably to assist them in safe passage to the next life.

These rituals appear about the same time as the earliest introduction of coins in the Mediterranean during antiquity. This speaks to the long lineage of coins occupying an important place in the afterlife—and, more broadly, the cultural importance of coins in ancient rites. 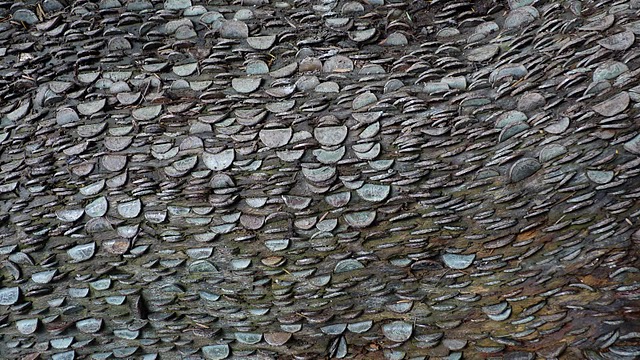 Photo courtesy of Rosser1954, via Wikipedia

In a more contemporary example of coins being used in symbolic rituals, there are many examples in Britain of coins being embedded in old logs or "wishing trees" (pictured above, below) as a way of making a wish or spiritual offering. Some sources indicate the tradition of hammering coins into tree bark goes back to medieval times, and was highlighted in the diaries of Queen Victoria during the 19th century. It continues to this day. This is not unlike the tradition of throwing coins into fountains.

Related to all of these practices is the American tradition of placing various coins at the gravestones of soldiers who gave their lives in defense of the country's freedoms and safety. This symbolic act of gratitude is not surprising given the long history of similar rituals detailed hereinabove—not to mention the military's use of "challenge coins" as incentives to those in service. Sometimes, the challenge coins themselves are also left at the headstones of fallen combatants. This is quite a selfless act considering the difficulty with which challenge coins are obtained.

Fittingly and admirably, the spare change at gravestones is either used to fund the cemetery itself or to help cover the costs of burial services for veterans who cannot afford it.