Zoltan Pozsar, the Four Prices of Money, and the Coming Gold Bull Market

Zoltan Pozsar, the Four Prices of Money, and the Coming Gold Bull Market 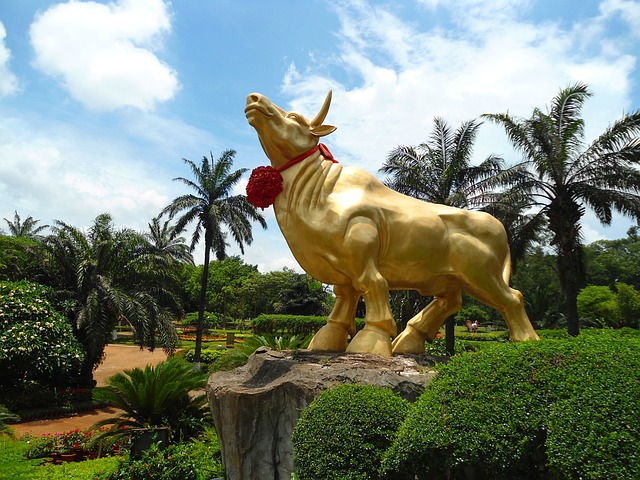 With equities in a bear market, and the Fed adjusting the price of money, we can expect a gold bull market in the coming years.

One of the more intriguing financial analysts of our times is Zoltan Pozsar, Managing Director and Global Head of Short-Term Interest Rate Strategy at Credit Suisse. In his writings of the past months, one of the things that caught my attention was his framework for multiple prices of money. Remarkably, when I looked up big historical changes in the price of the US dollar, they usually succeeded equity bear markets and introduced gold bull markets. Because equities are in a bear market as we speak, we can expect a gold bull market in the years ahead, enabled by the Federal Reserve changing the price of money.

First, let’s see how changes in the price of the dollar have caused gold bull markets in the past 100 years. Then we will add the stock market.

The Four Prices of Money and Previous Gold Bull Markets

Pozsar’s money framework, which he got from his intellectual mentor Perry Mehrling, states money has four prices:

In the 1920s, credit expansion created an economic boom. When the inevitable bust followed the US entered a severe depression. Eventually, in 1933, the US government decided to internally discontinue the gold standard. Externally the dollar continued to be fixed to gold, but the peg was lowered form 0.048 troy ounces per dollar to 0.029 ounces. Strictly speaking this wasn’t a gold bull market, but the gold price did go up from $20.67 to $35 dollars per troy ounce. The dollar was devalued against gold to get even with countries that devalued before the US did and to cheapen the dollar against foreign currencies that weren’t devalued yet. The price of gold in dollars went up because of the third price of money: foreign exchange rates.

In the 1960s the US started printing too many dollars relative to the amount of gold it owned backing those dollars. The gold price of $35 dollars was under pressure and the US Treasury had to sell thousands of tonnes of gold to defend the peg. To stop the bleeding, it was decided to let the gold price float in the free market in 1968. Though only marginally at first, the dollar price of gold went up because of the first price of money: par.

Foreign central banks could still redeem dollars for gold at the US Treasury after 1968 (at the statutory price, not the free market price), depleting reserves. Finally, President Nixon suspended dollar convertibility in 1971, and so removed the last check on unbridled monetary expansion. An abundance of dollars created in the 1960s and 1970s led to double-digit consumer price inflation. The gold price skyrocketed to a peak of $800 dollars in 1980. The dollar price of gold in the 1970s went up because of the fourth price of money: price level.

In 1998, under the guidance of several Nobel prize-winning economists, an American hedge fund blew up. The Federal Reserve reacted by lowering interest rates, further fueling a stock boom. The dot-com bubble popped in 2000 and the Fed slashed rates from 6% to 1%. The gold price started rising again and reached $1,900 dollars per troy ounce in 2011. As inflation was rather stable from 2000 through 2011, the gold price mainly went up because of the second price of money: interest rates. 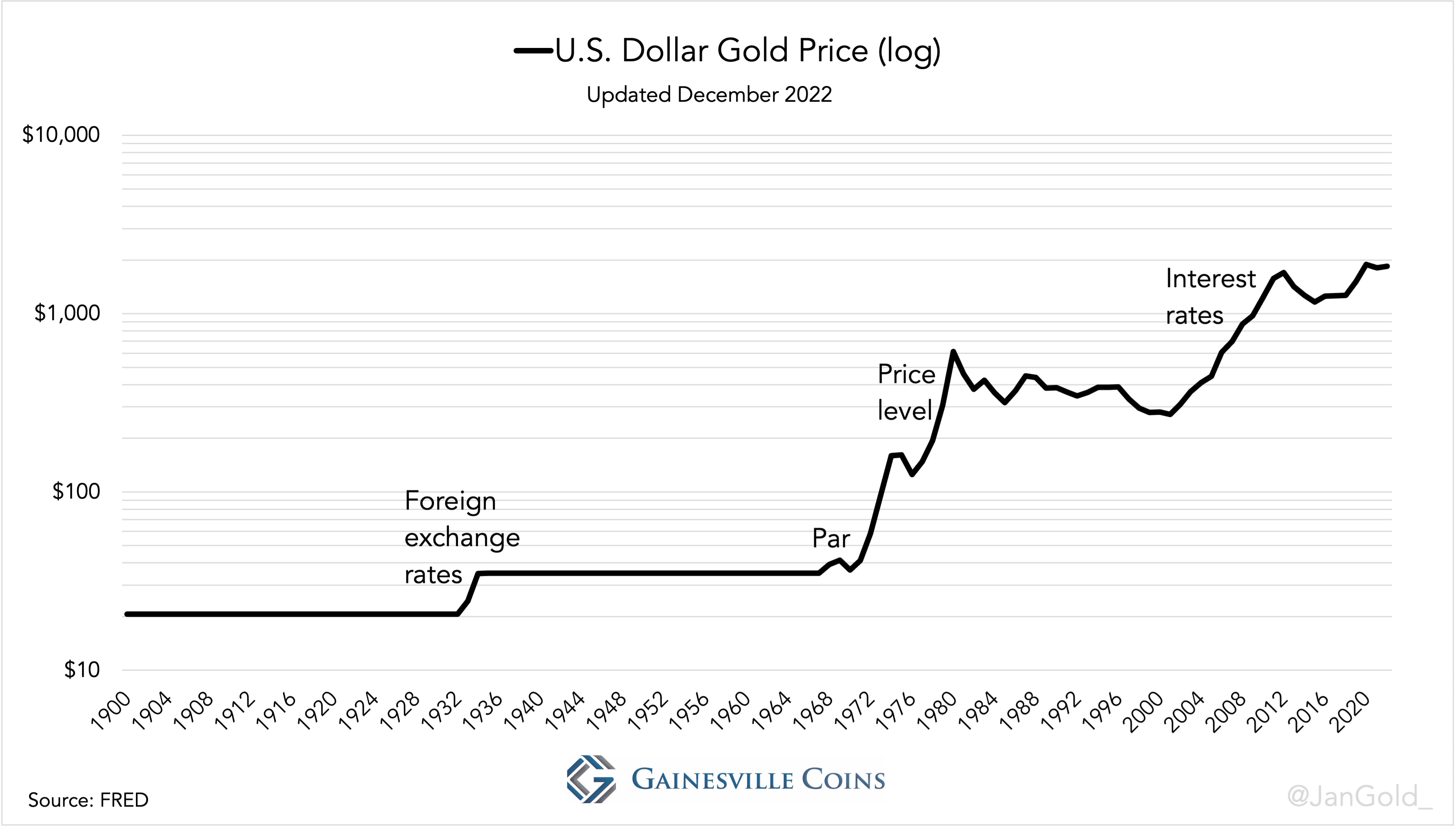 Stock Market Bubbles and the Cheapening of Money

Changes in the price of money often come after an economic downturn that a central bank counters by, for example, lowering interest rates. Easy money blows a new equity bubble. Once that pops, easier money still blows another bubble to replace the previous one. This leads to a vicious cycle of bubbles and ever-easier money, in which the value of money incrementally declines, and the gold price appreciates.

Now we understand why, in the chart below, the stock market often peaks just before the price of money is changed, and, as a consequence, the gold price rises. 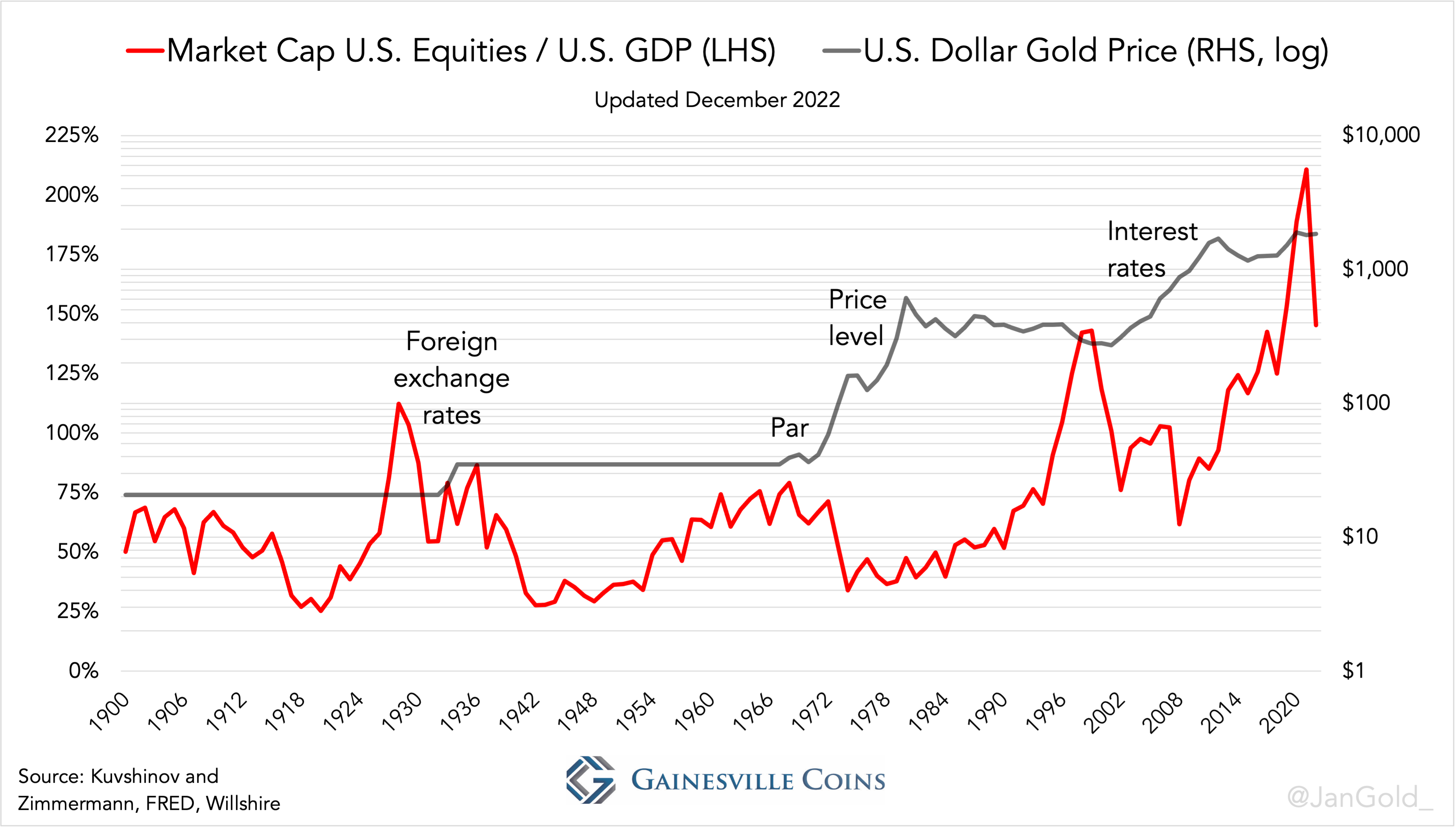 How will the price of money be altered this time around? According to Pozsar, through interest rates and price level (yield curve control). After the US weaponized its currency to freeze Russia’s assets, the amount of US government debt that needs to be financed is larger than the world is willing to absorb. The Federal Reserve will bail out the government by buying up bonds of all maturities, effectively capping yields across the curve. Inflation will stay elevated, above the entire yield curve, which lowers the value of money. In this environment investors and foreign central banks will flee to gold.

Read more about major developments in the global gold market:

The West–East Ebb and Flood of Gold Revisited