What follows is a complete list of regular-issue United States coins that are made with silver.

The U.S. has been minting silver coins since 1794, but you will find that virtually all coin denominations stopped using silver after 1964. The half dollar and dollar coins were reduced from 90% silver to a 40% silver composition for a brief time until the U.S. Mint switched to using cheaper metals in the 1970s.

Today, the only U.S. coins currently in production that contain silver are commemorative coins, special collectibles, and American Silver Eagles.

The actual silver weight (ASW) is included for each listing. The ASW is the amount of pure silver in each coin. 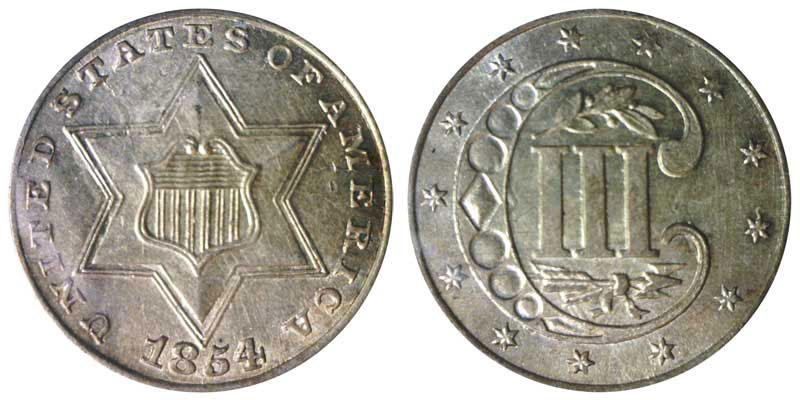 The small three-cent silver pieces were also known as "trimes." 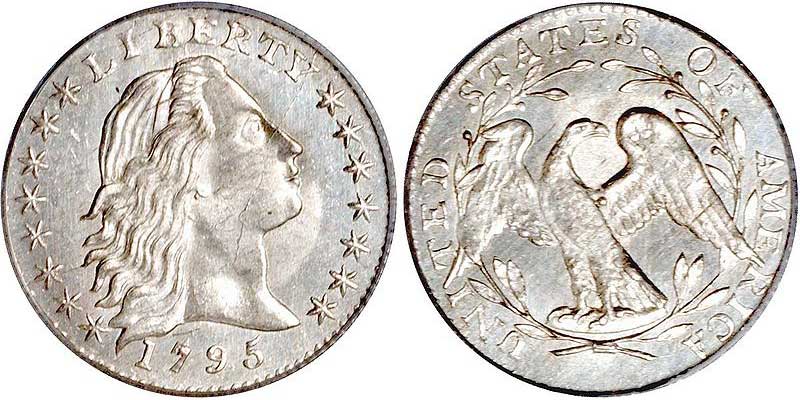 These half dimes were among the first coins ever struck at the United States Mint. 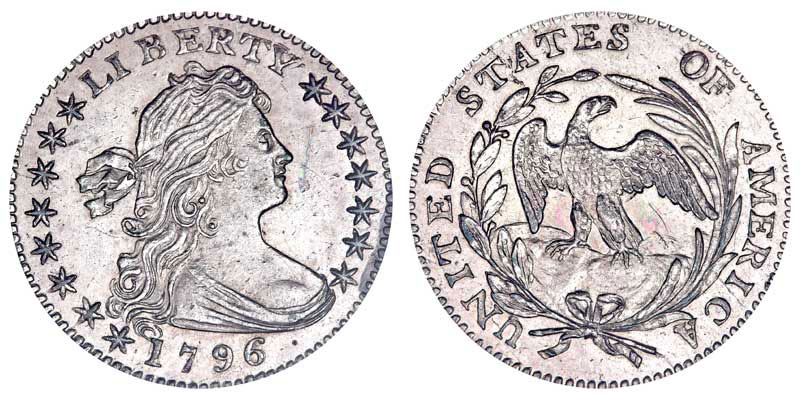 Both the Draped Bust and Capped Bust half dimes were 89% silver. 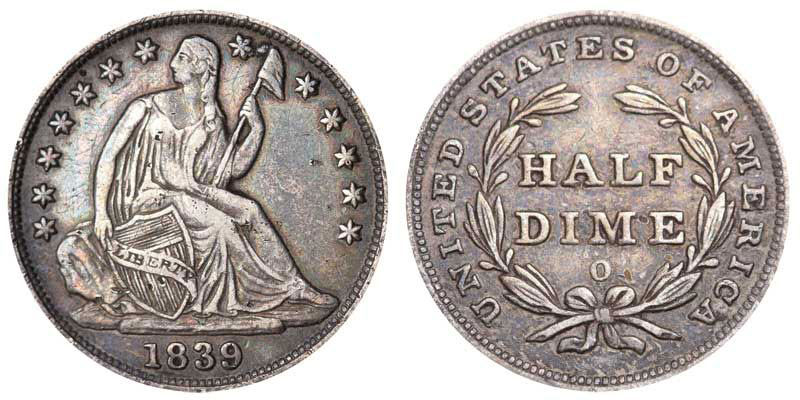 Seated Liberty half dimes were the first to use the 90% silver standard.

You can distinguish 35% silver "war nickels" by the large mintmark on the reverse. 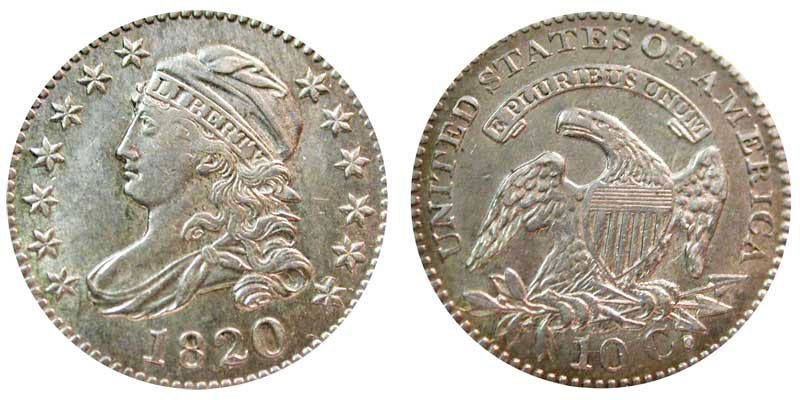 Although the diameter of the dime was reduced in 1828, its silver content remained the same.

The Seated Liberty design was used across many denominations in the 1800s.

Barber dimes use slightly less silver than their predecessors.

The Mercury dime was officially known as the "Winged Liberty" dime, but the nickname stuck. 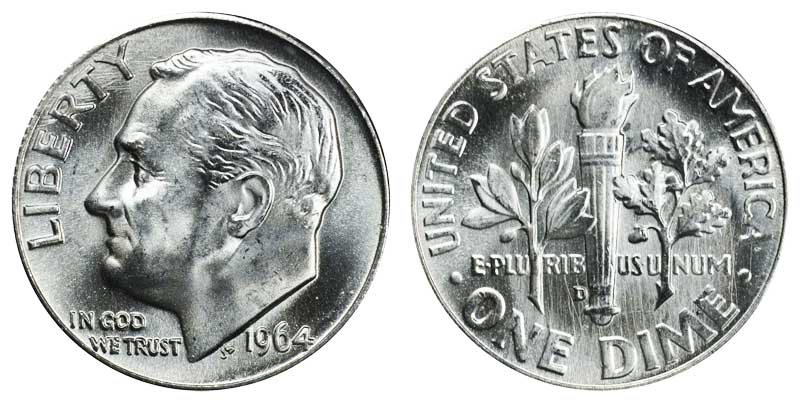 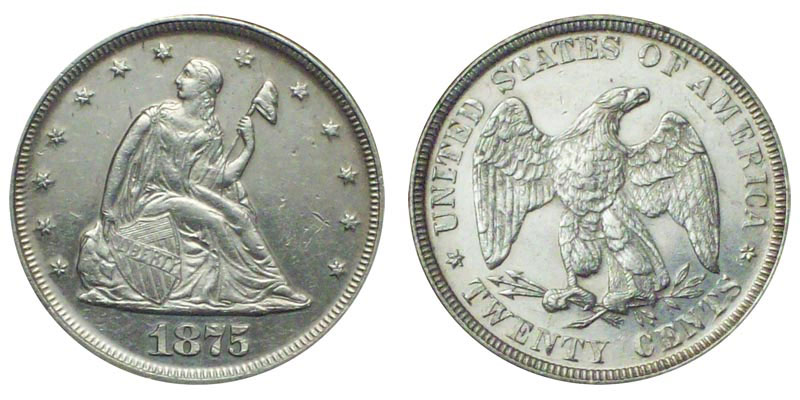 This short-lived denomination was not popular, and was often confused with the quarter dollar.

Like the first half dimes, the first quarter curiously omitted the face value on the coin.

The various Barber coinage is named for its designer, Charles E. Barber.

The Washington quarter was originally supposed to be a one-year commemorative, but ultimately the design was kept. 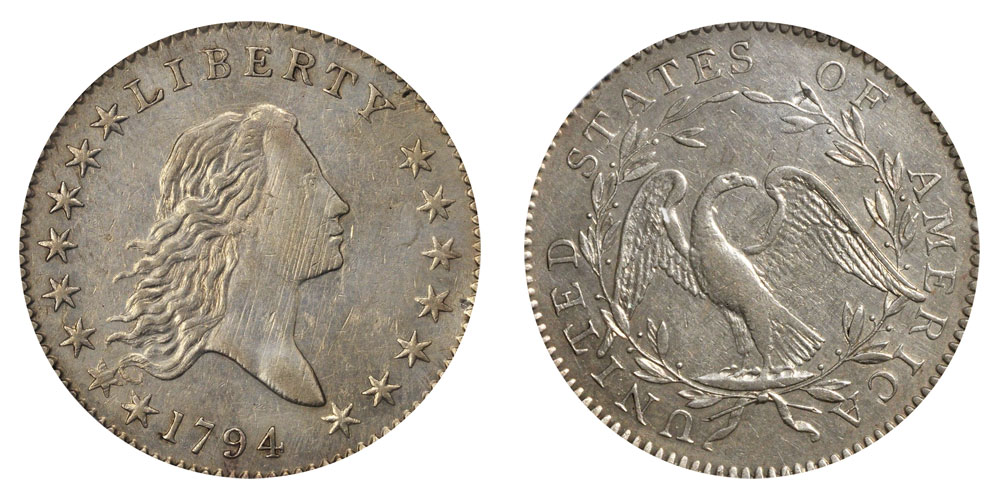 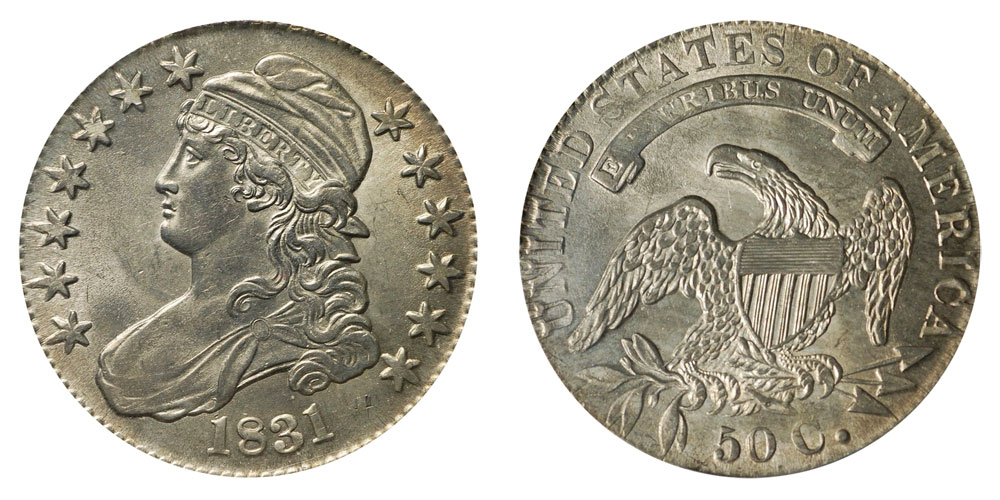 Unlike the Draped Bust type, the Capped Bust designs were the first to consistently list the denomination.

The Seated Liberty motif was one of the longest-running coin design in American history.

Like the other Barber coinage, the U.S. Mint slightly reduced the weight of silver coins in 1892.

The Walking Liberty design is often considered one of the most beautiful ever to appear on an American coin.

The Franklin half is one of the only U.S. coins to depict a real person who was not a former president. 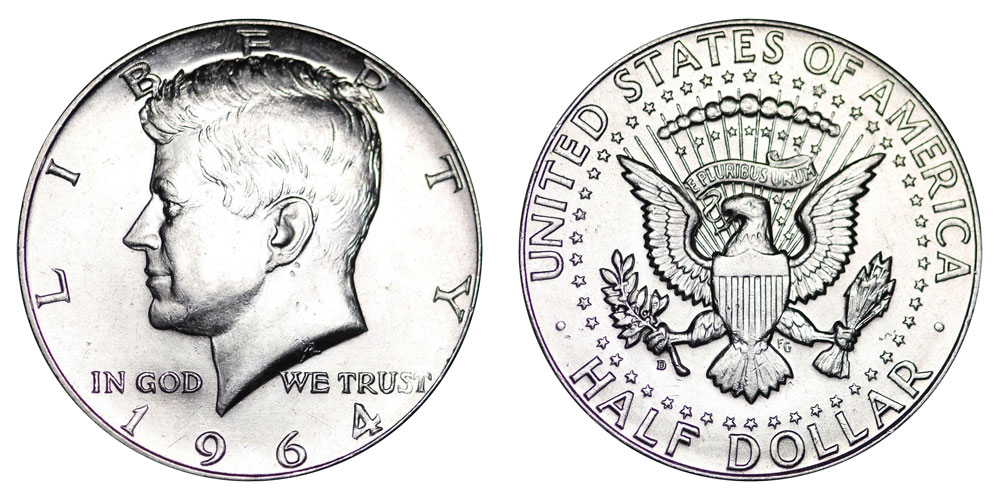 Only the first year of issue in 1964 featured a 90% silver composition for the Kennedy half. 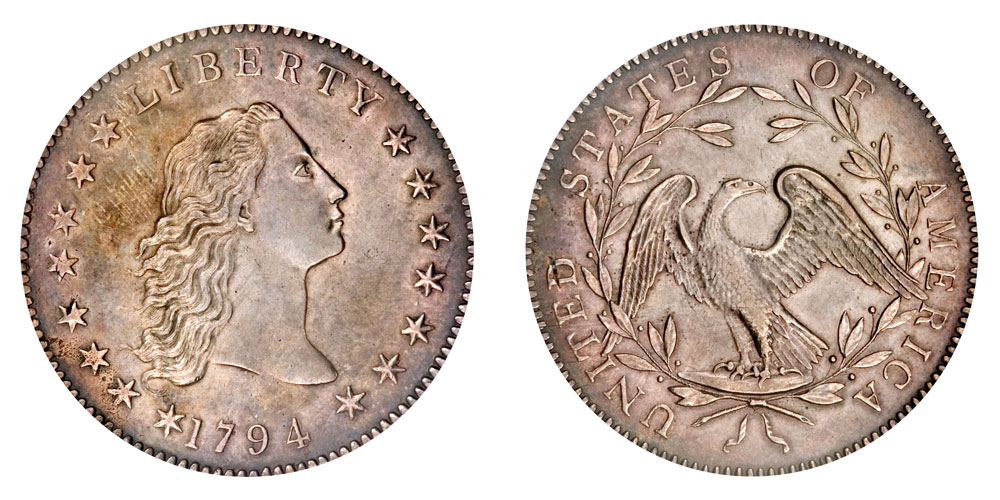 The first-ever silver dollar in the U.S. remains highly sought-after by collectors. 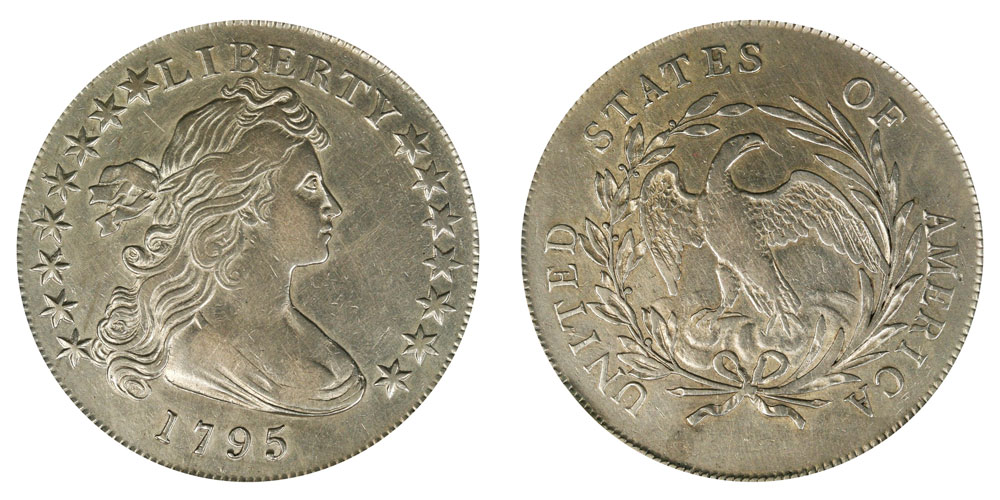 Designer Christian Gobrecht's original flying eagle reverse was rejected by the mint, but was later used on the small cent. 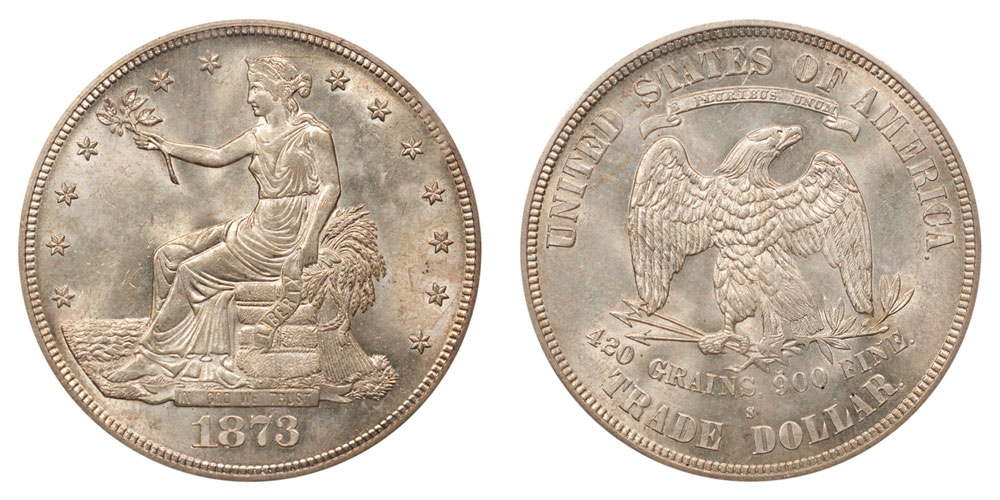 The Trade dollar was specifically minted for export demand, particularly in Asia.

ASW: Varies by denomination, but is consistent with all other coins on the list with the same face value.

The Morgan dollar is still one of the best-known American coins.

The issuing of the Peace dollar beginning in 1921 was partly to honor the end of World War I.

Note that only certain Eisenhower dollars have a 40% silver composition.

The American Silver Eagle is the only coin on the list that is 99.9% pure silver.

Many silver coins have been struck over the course of United States Mint history, which traces back to 1792. Some of these silver coins are perhaps obvious, including the silver dollar—arguably America’s most iconic silver coin. Other silver coins may be further from your radar, including three-cent silver coins and half dimes. And then there are the silver wartime “nickels” of the 1940s, which contain 35% silver content. (That would seem to belie the common nickname of the otherwise base metal coin’s denomination.)

Not all U.S. silver coins make excellent investments from the precious metals standpoint. It's not because their silver content isn’t valuable, but rather because the numismatic or collectible value of the coin far exceeds its bullion value.

For example, the 1804 Draped Bust dollar contains around $25 of silver content. That particularly silver dollar saw just 15 pieces made. It is a tremendous rarity known as "The King of American coins," and realizes more than $2 million at auction. Is it a great collector coin? Absolutely… But its worth as a rarity is staggeringly high and independent of its silver value. And, from the pure silver stacker’s standpoint, $2 million is a lot of money to pay for barely an ounce of silver, isn’t it?

Non-rare, non-collectible 90% silver coins are often referred to as "junk silver." By contrast, rare coins and uncirculated coins may be worth much more.

There are roughly a dozen different types of United States silver coins that are widely bought as bullion pieces. They include a variety of popular designs, some still in production today. The majority of these silver coin types are obsolete.

However, the Roosevelt dime, Washington quarter, Kennedy half dollar, and American Silver Eagle are still in production today. Each have been made in silver for the collecting and investing crowd.

All dimes, quarters, and half dollars were made for circulation with a 90% silver content up through the year 1964. In 1965, rising silver prices forced the United States Mint to adopt a copper-nickel clad composition for the dime and quarter. The half dollar was changed to a 40% silver clad profile.

Meanwhile, the wartime nickels of 1942-1945 contain a 35% silver composition instead of a copper-nickel alloy. The alloy was temporarily scrapped during the height of World War II to save nickel for the war effort. No nickels were made later with silver.

In 1971, the United States Mint converted all circulating Kennedy half dollars over to the same copper-nickel clad composition already employed for the dime and quarter. Still, that same year production of the Eisenhower dollar also began. A limited number of Eisenhower dollars were made for collectors in a 40% silver format through the United States Bicentennial year of 1976. The same year the U.S. Mint also issued 40% silver Bicentennial quarters and half dollars.

Beginning in 1977, the U.S. Mint officially abandoned silver planchets for all its circulating coin types. Included were the Washington quarter, Kennedy half dollar, and Eisenhower dollar. In 1986, the United States American Silver Eagle was released as a .999-fine silver coin expressly struck for bullion investors. A proof version was also made for collectors. Over the years, a great many collectors have also taken up collecting the bullion version of the American Silver Eagle year by year.

In 1992, the United States Mint resumed striking a small number of proof Roosevelt dimes, Washington quarters, and Kennedy half dollars in 90% silver. These typically trade for small amounts over their spot value in the secondary market. In 2015 new legislation provided for these silver proofs to be produced in a .999 fineness. This was fully realized in 2019 when these three denominations were first minted in that purer .999-fine format for certain proof sets.

Guided with the knowledge that a bevy of U.S. coins were struck in silver formats, you may have many decisions to make about the coins you wish to buy to further your silver investment goals. Bear in mind that many of the silver coin types that are listed here as good bullion buys also saw the production of some scarce dates whose values are exponentially higher than their spot prices.

Legal tender status – Silver coins are real money, and they can still be spent as cash today if you wish. Of course, with silver prices ranging above $20 an ounce or way more, this may not seem like a “pro” worth mentioning. But consider the unlikely but possible scenario that silver prices collapse to near zero. (Stranger things have happened.) In this case, you would never completely lose money on your silver investment because of the built-in legal tender face value of the silver coins you own.

High liquidity – Silver coins have at least two active marketplaces: the precious metals market and the numismatic collectibles market. This multiplies the number of opportunities you have to sell your silver coins and helps maximize the return on your investment.

Ideal suitability for use in emergencies – Many people stack silver because they fear economic collapse. They want a contingency plan in place in case the value of the United States dollar essentially evaporates. Buying silver coins in various sizes (dimes, quarters, half dollars, etc.) affords you the chance to parcel out your silver holdings in different amounts. It would depend on the size or value of the goods for which you wish to trade. For example, perhaps a 35% silver nickel buys a postage stamp to mail an important letter (in case the internet network is down), a silver dime or two secures a loaf of bread, and so on.

When it comes to investing in precious metals, buying silver coins is a wonderful way to build a solid portfolio. It can help protect yourself and your loved ones in the event of an unforeseen emergency. If you wish to buy silver coins, you should contact your trusted silver bullion dealer today.

Browse the product listings below for some of the U.S. silver coins available for sale at Gainesville Coins:

More information about where to buy precious metals from the authors at Gainesville Coins:

What Are the Different Penny Errors? How Much Are They Worth?

How Much Is a Gold Bar Worth Today?

The Difference Between Troy Ounce vs. Ounce

What's the Melt Value of an Oscar Statue?