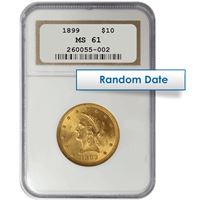 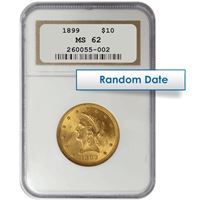 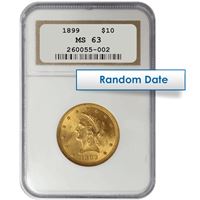 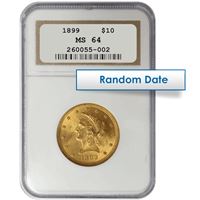 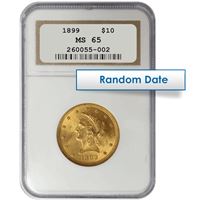 Prior to the introduction of the double eagle in 1850, the $10 Liberty gold eagle was the largest denomination circulation coin produced by the U.S. Mint. Its Coronet Head design of Lady Liberty, created by the U.S. Mint's 3rd Chief Engraver, Christian Gobrecht, came to define the series of Liberty gold coins that ran from 1838 to 1907.

Containing 0.48375 troy ounce of pure gold, the ten-dollar Gold Liberty measures 27 mm in diameter and weighs 16.718 grams in terms of gross weight. For many years, the annual mintage figures for the Liberty eagle are considerably low (especially between 1838 and 1877), with under 10,000 original issues. This has made these coins especially attractive to collectors as well as precious metal investors. Moreover, because the $10 Liberty design went almost entirely unchanged for its 69 years of use, it is an excellent choice for a Type set of 19th-century U.S. gold coins.

The Coronet Liberty bust on the coin's obverse neatly embeds the word “LIBERTY” into Miss Liberty's crown -- a cleverly conceived detail that was retained on later American gold and silver coins (such as the Liberty gold double, the Saint-Gaudens gold eagle, and the Morgan silver dollar) for the greater part of a century. Gobrecht decided to portray Lady Liberty with her hair coiled into a bun, which was a departure from previous representations of Liberty with long, flowing hair on America's coins.

The obverse also features thirteen stars that stretch around the rim of the coin, representing the original thirteen U.S. colonies. The year-date is placed below the truncation. On the reverse, an heraldic eagle similar to the one found on the Great Seal of the United States is centered, wings spread, above the mint mark and denomination inscribed as "TEN D." In 1866, the national motto "IN GOD WE TRUST" was added to the reverse in the open space just above the eagle. The edge of the coin uses a reeded design.

The Gobrecht Coronet Liberty is considered by many to be among the most beautiful and elegant designs in the history of American coinage. It is no accident that Gobrecht's immediate successors as chief engraver of the mint (James Longacre, followed by William Barber, and then his son Charles Barber) fashioned their depictions of Liberty to closely resemble the Coronet Head theme, borrowing the use of the crown emblazoned with the word "LIBERTY." In addition to being one of the longest-running American coin designs without major changes, the Liberty Head design had an indelible impact on the style and symbolism of official representations of the United States.

Buyers looking to augment their collection, or simply own a piece of American history, can purchase these Certified NGC/PCGS graded $10 Liberties from Gainesville Coins now! These coins have been certified (or graded) by one of the two most trusted certification services, Professional Coin Grading Service (PCGS) and Numismatic Guaranty Corporation (NGC). You can choose from specific dates, mintmarks, grades, or random dates.