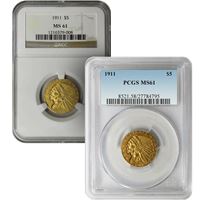 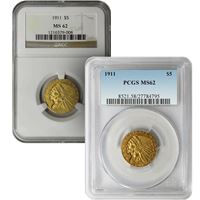 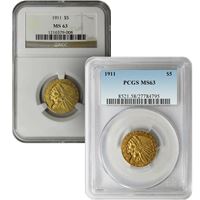 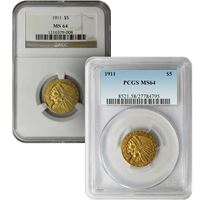 The $5 Indian Head Gold Half Eagle was part of Theodore Roosevelt’s push to comprehensively upgrade the artistic quality of U.S. gold coinage. Naturally, this meant the coin was designed by one of the artist Augustus Saint-Gaudens' students, Bela Lyon Pratt. First introduced in 1908, the design features a Native American man in an Indian Headdress facing toward the left on the obverse. The reverse design depicts a standing eagle posing proudly upon a pile of arrows entwined with an olive branch.

Very few of the $5 Gold Indian (minted between 1908 and 1929) survive in high grades today because they weren't collected with much enthusiasm at the time. Pratt's design broke with all American numismatic tradition by rendering the images in incuse, a technique where the details of the sculpture are sunken into the field rather than raised above it in relief, as is the case with virtually all other coins.

Perhaps unfamiliar with seeing such a coin design, the American public developed a misconception that the recesses in the design would cause the Indian Head gold coins to accumulate excessive dirt and germs. At the time, they were far less popular among collectors and numismatists.

Luckily, Pratt's design and his truly unique approach to engraving are appreciated today for their artistic merit and novelty within the U.S. numismatic tradition. Thanks to the tastes (and scientific misunderstandings) of the turn of the 20th century, this also means that certain years and dates of the $5 Gold Indian half eagle are considerably rare in high grades because so few were kept. It's also likely that hundreds of thousands were melted in the gold confiscation of 1933.

Prior to the incuse Indian Head design, the gold $5 half eagle denomination featured a number of different designs showing Lady Liberty wearing various symbolic caps over the years. The half eagle denomination was actually the first coin (gold, silver, or otherwise) ever officially struck for the United States. The first $5 gold half eagle dates all the way back to 1795. It was authorized in the original Coinage Act of 1792, when the U.S. issued its first legal tender coins.

In some ways, the gold half eagle was America's original answer to the monetary standard of the time, weighing just slightly more than the British gold sovereign in terms of its actual gold weight (AGW).

In total, the $5 Indian Head gold half eagle contains 0.24187 troy ounce of gold and is struck from .900 fine gold. The earliest varieties of the coin from the 18th century were actually 22 karats (.917 fine). Partially because of the lack of enthusiasm or demand by the public mentioned earlier, the coin was not minted in any of the years between 1917 and 1928. Gainesville Coins offers a number of Certified $5 Indian Head Gold Half Eagles from the two premier grading services preferred by collectors: Numismatic Guaranty Corporation (NGC) and Professional Coin Grading Service (PCGS).