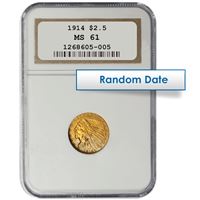 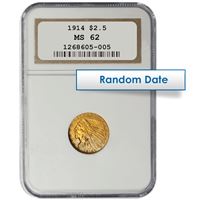 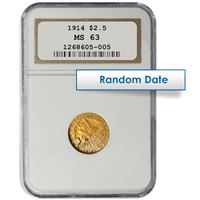 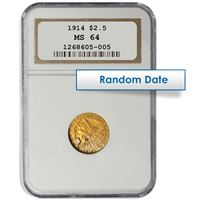 The $2.50 Indian Head Gold Quarter Eagle was designed by Bela Lyon Pratt and features the left-facing bust of a Native American man wearing a billowing Indian Headdress. He is surrounded by stars on either side and the word "LIBERTY" at the top rim. The year the coin was issued is inscribed at the bottom of the design. These coins were minted over two separate periods -- first from 1908-1915, and again from 1925-1929. In part because of the lack of demand at the time (mentioned below), no quarter eagles were minted in the intervening years from 1916 to 1924.

The reverse design is of the Standing Eagle, who is perched upon a bundle of arrows and an olive branch. Pratt borrowed this pose from his mentor Saint-Gaudens, who used a very similar eagle for the reverse of the $10 eagle coin. (The fact that the U.S. gold coin with a $10 denomination was called an "eagle" is the origin of the name "quarter eagle" for the $2.50 gold coin.) The mottoes "E PLURIBUS UNUM" and "IN GOD WE TRUST" are placed to the left and right of the eagle, with the denomination indicated below.

These Indian Head Quarter Eagles have been graded by the expert staff at either the Numismatic Guaranty Corporation (NGC) or the Professional Coin Grading Service (PCGS), the two most trusted authorities for grading numismatic coins. The NGC/PCGS Certification carries serious cachet among collectors; not only is the coin graded by one of the premier coin grading services in the industry, it is also encapsulated in a protective case that preserves its condition from further wear or harm.

Pratt's design of the Indian Head Quarter Eagle was also used for the concurrently circulated $5.00 Indian Head Half Eagle. These two coins are unique among the rest of U.S. coinage for their incuse, rather than relief, design. This means the image on the coin is recessed down into the surface instead of raised above it. Frankly, minting coins in incuse never caught on with the American public and was quickly abandoned after 1929. The $2.50 Indian gold quarter eagle and $5 Indian gold half eagle, both of which use different sizes of the same design by Pratt, remain the only American coins ever to use incuse engraving for the obverse and reverse.

The only time you really ever see incuse used on coins is for edge lettering -- small characters or numerals impressed into the edge of the coin (the "third side" along its thickness besides the two faces), which normally has a simple reeding pattern or is plain.

These once-undesirable coins have grown more popular with collectors today for their novelty and their gold content. The novelty comes from the incuse engraving technique as well as the fact that most 21st-century observers are likely to find the denomination of $2.50 rather unfamiliar. The Indian Head Gold Quarter Eagles were all struck from .900 fine gold, and have 0.1209 troy ounce AGW (actual gold weight). Buy Certified $2.50 Indian Head Gold Quarter Eagles at Gainesville Coins, or online any time at Gainesvillecoins.com.