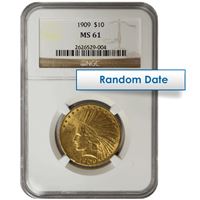 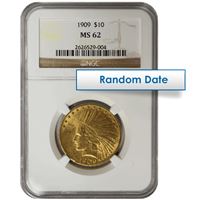 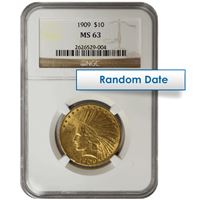 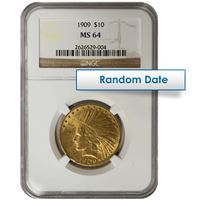 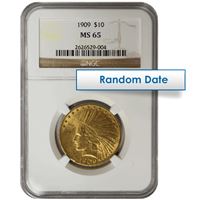 Smart investors and coin collectors know the added value of buying gold coins that have already been certified (meaning graded) by one of the leading third-party grading companies, either NGC or PCGS.

Not only does this ensure the coin is authentic, but is also assigns a grade to the coin that let's you know exactly what kind of condition it is in. This is a paramount concern to collectors and can have a significant impact on the market price of the coin. This is especially true with the higher grade coins that are in Mint State.

The Indian Head $10 Gold Eagle is among the most revered designs ever to grace any U.S. coin. It was created by the famous sculptor Augustus Saint-Gaudens prior to his death in 1907. He designed both the obverse and reverse of the coin.

A rather unusual depiction of Lady Liberty appears on the obverse design. She wears a billowing Native American headdress of feathers that features the word "LIBERTY" emblazoned on the headband. By some accounts, this headdress is a type of war bonnet. This combination of cultural imagery is a departure from all other depictions of Miss Liberty, and even uses a different style from the Indian Princess gold $1 coins that were introduced decades earlier.

The reverse of the coin shows a bald eagle that is perched upon a branch wrapped in an olive branch. The proud pose of the eagle is somewhat similar to the Flying Eagle that appears on the reverse of the Saint-Gaudens $20 double eagle. It was actually adapted from the image on the popular Flying Eagle Cent that was minted during the 19th century.

There are other aspects of the $10 Gold Indian that make this piece different from other American coin designs. Saint-Gaudens made use of the edge of the coin, which generally has a plain design or a simple reeded pattern. Instead, the edge on these coins features raised stars that represent each state in the Union. It also stands as the last $10 eagle ever issued for circulation by the U.S. Mint.

Locating these coins in the highest grades can be a challenging task. Many collectors settle for coins that grade About Uncirculated (AU), which covers the numeric grades 50, 53, 55, and occasionally 58. However, coins that are certified Mint State (MS), which are grades between 60 and 70, are much more desirable in the numismatic marketplace.

This is why Gainesville Coins strives to provide our customers with exceptionally high quality Indian Head $10 Gold coins. You can find examples of this coin graded MS61 and above in our inventory. Add one of these beautiful and historic coins to your collection!