A full price chart for Lincoln cents will be coming to this page soon!

The Lincoln cent is America's longest-running coin design. It debuted in 1909 to mark the 100th anniversary of Abraham Lincoln's birth.

The reverse of the Lincoln cent has seen two major redesigns. The Lincoln Memorial design replaced the Wheat Back in 1959. Four different coin reverses commemorated the Lincoln Bicentennial in 2009. The Shield reverse became the new standard Lincoln cent design in 2010. 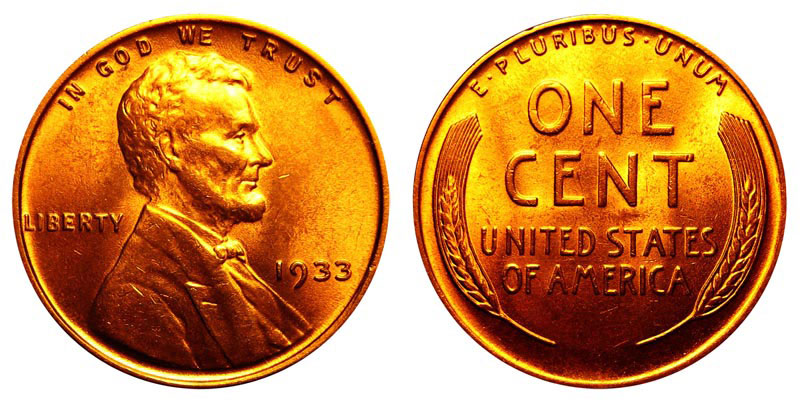 The Lincoln cent was the first one-cent coin to bear the motto "In God We Trust." It was also the first circulation US coin of any denomination to bear the likeness of an actual person. Previous coins had borne the image of an allegorical Liberty.

The Lincoln cent broke a tradition begun in 1792. President George Washington forbade the use of his image on America's first coins. He declared that it smacked of monarchy. More importantly, it could encourage a cult of personality around the nation's leader. In a measure he would have opposed, Washington's face would appear on the quarter in 1932.

Sculptor Victor David Brenner designed the original Lincoln "Wheat" cent in 1909. Unlike other coin designs, there was no contest to redesign the one-cent coin. President Theodore Roosevelt chose Brenner for the job, based on his 1907 bronze plaque of Lincoln.

The Lincoln Wheat Back cent was minted from 1909 through 1958. A new reverse showing the Lincoln Memorial replaced the Wheat cent in 1959. 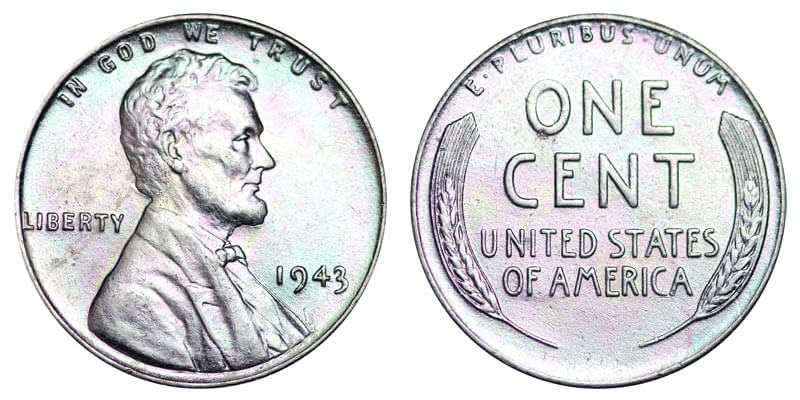 Metal shortages in World War II led to the only circulating US coin made of steel. From February to December 1943, Lincoln wheat cents were made of zinc-coated steel. This move freed up vitally needed copper for the war effort. Everything from wires to radios to electric motors depended on copper. Even the brass casings of ammunition and artillery shells required copper.

The adage "no good deed goes unpunished" certainly applied to the US Mint's efforts in 1943. First of all, the coin presses were never intended to strike imprints on steel, even if it was low-grade. This made production of the steel cents far more difficult.

The major defect encountered with the steel Lincoln cents was rust. The coin blanks were punched out of steel strips coated in zinc. This meant that the edges of the coins were exposed steel, which rapidly rusted in normal use. This rust got under the zinc coating of the coins, and could break through onto the front and back of the coin.

The steel cents were very unpopular in circulation. They were shiny like dimes when they were new, and nearly the same size. This led to people receiving a steel penny instead of a dime in change, or tendering a dime instead of a steel penny.

The public uproar over the steel "war cents" soon had the US Mint scrambling for alternatives. They found that brass cartridge and shell casings could be used to mint cents. Production of the "brass cents" started in 1944 and lasted into 1946.

The wartime switch to steel cents in 1943 resulted in some of the most unique and rare Lincoln cents in history. Some of the bronze coins blanks used in 1942 were accidentally left in the feeders for the coin presses in 1943.

1943 copper Lincoln cents have usually sharp features. Their eye appeal and rarity make them a highly sought after coin. The sharp strikes are a result of being coined at the high pressures needed to make steel cents.

The opposite happened in 1944, when the US Mint switched to "cartridge brass" to make one-cent coins. Some old zinc-coated steel blanks were stuck in the feeders, resulting in steel 1944 Lincoln cents.

How Many 1943 Bronze Lincoln Cents Are There?

The 1943-D bronze Lincoln cent struck at the Denver Mint is unique. It sold in 2010 for $1.7 million dollars! With a price like that, it's easy to see why so many fakes are circulating.

How Many 1944 Steel Lincoln Cents Are There?

There are an estimated 25 to 30 1944 steel Lincoln cents. This makes sense, as Philadelphia struck 1.4 billion cents in 1944. Many of these have too much environmental damage to receive a grade by coin grading services.

There are seven known 1944-D steel Lincoln cents struck at the Denver Mint.

There are only two 1944-S steel Lincoln cents known to exist.

The most famous and rarest Lincoln Wheat cent is the 1909-S "VDB". VDB are the initials of the coin's artist, Victor D. Brenner.

The original Wheat cent had Brenner's initials on the bottom of the coin's reverse. Some people protested the initials, claiming that they weren't allowed (they were). To end the controversy, the Mint ground off the initials on the master coin hubs. The initials returned to the Lincoln wheat cent in 1918,

The San Francisco Mint got all their coin dies from Philadelphia, so they started Lincoln cent production later. Only 484,000 1909-S Lincoln cents with the VCB initials were struck. As a comparison, almost three million 1909 VDB cents were minted in Philadelphia.

Another famous Lincoln Wheat cent is the 1955 Doubled Die Obverse (DDO). A doubled die produces a second, offset image on the same die. Many doubled die errors are hard to see without a magnifying glass. Others, like the 1955 DDO Lincoln cent, have dramatic die doubling that is easily seen with the naked eye. This obvious, sharp doubling makes the 1955 DDO cent one of the most popular US coin varieties.

What Are Doubled Die Coins?

Until 1997, it took several strikes from a design hub to make a coin die. The die was removed from the press and reheated to soften it again before the next strike. Sometimes, the die wasn't aligned properly when it was reinserted. This off-center strike caused a double image on the die.

High copper prices forced a change in the composition of the Lincoln Memorial cent in 1982. A copper-plated zinc coin replaced the traditional 95% copper, 5% zinc alloy. The new coin had a core of 99.2% zinc and 0.8% copper, thinly plated with pure copper. This gave the new coin a cumulative content of 97.5% zinc, and 2.5% copper. The new coins quickly earned the nickname "Zincolns." They weighed 2.5 grams, compared to the 3.11 grams of the previous copper coins. The outward appearance of the two types of coins is the same. The US Mint produced both copper and zinc Lincoln cents in 1982. The only way to tell which is which is by their weight.

Large-scale melting of old Lincoln cents for their copper continued for decades afterward. This forced the Mint to waste time and money to make replacement cents. Congress finally outlawed melting pennies and nickels in 2007.

Since billions of Lincoln Memorial cents were made each year, there are no rare dates. Instead, it is eye-catching and rare minting errors that make Memorial cents valuable. The 1969-S DDO is famous for its highly visible die doubling on the words "Liberty" and "In God We Trust." An Extremely Fine XF40 is the lowest grade 1969-S DDO recorded on price guides, at $13,300. A good mid-range uncirculated grade is worth $32,000.

Another popular Lincoln Memorial cent error is the 1984 "Double Ear" DDO. This coin displays dramatic doubling on Lincoln's earlobe. While not exceedingly rare (a worn one is $20, and uncirculated $140) it is a well-known and popular coin.

2009 marked the bicentennial of Abraham Lincoln's birth. Naturally, the Lincoln cent was part of the celebration. The Lincoln cent had had only one design change in 100 years. The Lincoln Memorial reverse replaced the Wheat reverse in 1959, for Lincoln's 150th birthday.

Instead of simply making a new reverse design to last for the next 50 years, four commemorative designs for 2009 were struck. Each reverse design depicted an important time in Lincoln's life.

The first coin was titled "Birth and Early childhood in Kentucky." It featured a representation of the frontier log cabin where Lincoln was born in 1809.

The second coin was "Formative Years in Indiana." It showed a teen Lincoln taking a break from splitting fence rails from logs by reading a book. Lincoln was largely self-taught, as there were few schools on the frontier.

The fourth and final 2009 Lincoln Bicentennial cent was "Presidency in Washington, DC." It showcases the incomplete dome of the US Capitol under construction. Lincoln took his oath of office in March 1861 on the steps of the Capitol, with the unfinished dome towering behind him.

The current Lincoln cent is the Shield Reverse. It was introduced in 2010, after the Lincoln Bicentennial cents. The law authorizing the new permanent design stated that it "shall bear an image emblematic of President Lincoln's preservation of the United States of America as a single and united country."

The contest for the new design fielded 18 entries. The Union Shield design by Lyndall Bass was chosen. The shield evokes the style of the mid-1800s and Civil War era. The thirteen vertical stripes represent the original Thirteen Colonies. They come together to form a solid cap to the shield, as the 13 colonies came together to form the United States. The national motto "E Pluribus Unum" is inscribed on the shield cap; "Out of Many, One." A large scroll in front of the shield bears the denomination ONE CENT.

The Union Shield Lincoln cent is expected to remain the one-cent coin design until 2059. That is, unless the efforts to abolish the penny succeed before then!