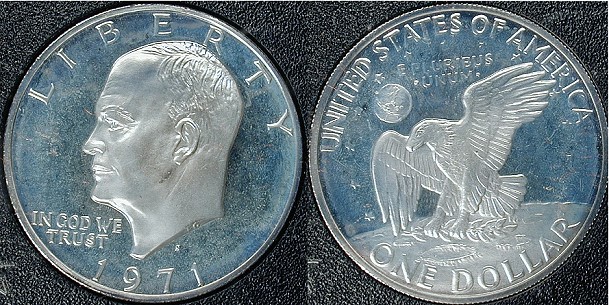 The Eisenhower dollar was the first "silver dollar" that was not made of silver. (a "clad silver" proof version was struck for collectors.) The "Ike" was also the last "full sized" dollar coin. Introduced in 1971, the Eisenhower dollar served two purposes. The first was to honor America's Supreme Allied commander of WWII and President Dwight D Eisenhower. The second was the commemoration of Apollo 11, which landed the first men on the Moon.

This short-lived dollar coin series only ran from 1971 through 1978. Just like its predecessors the Peace dollar and Morgan dollar, the public was averse to hauling these huge coins in a pocket or purse, when a paper $1 bill served the same purpose. Since U.S. paper currency was no longer backed by silver or gold, and the Eisenhower dollar didn't have any silver to begin with, the program was shut down.

This page is still under construction. More coming soon!