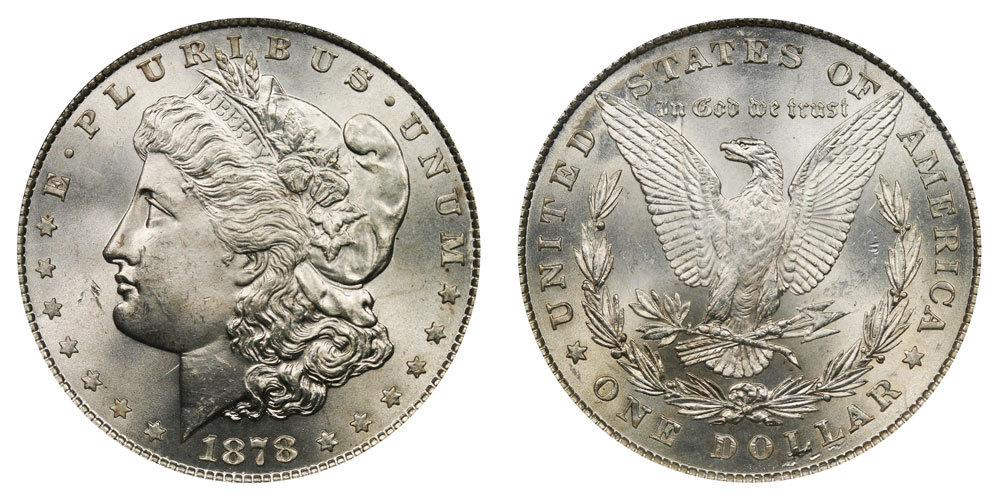 The eagle on the reverse of the original 1878 Morgan dollar design had eight tail feathers. Soon after the silver dollar's introduction, the U.S. Mint received many letters saying that the American Bald Eagle had an odd number of tail feathers. Engraver George Morgan quickly altered the reverse design to feature an eagle with 7 tail feathers.

Only around 750,000 Morgan dollars with the original design made it into the public's hands before the change was ordered. All these were struck at the main U.S. Mint in Philadelphia. The dies for the Mints in New Orleans, Carson City, and San Francisco had not shipped yet. They received the Second Reverse (7 Tail Feathers) dies.

How Many Tail Feathers Does a Bald Eagle Have, Anyway?

The 1878 8TF Morgan dollar is far scarcer than the 9.7 million 7 tail feathers version released the same year. This is reflected in the prices of each mintage. It can be found without much trouble, up to MS65. NGC and PCGS censuses show a combined total of just over 1,200 MS65, 105 MS66, twelve MS66+, two MS67, and a lone MS68 graded by PCGS.