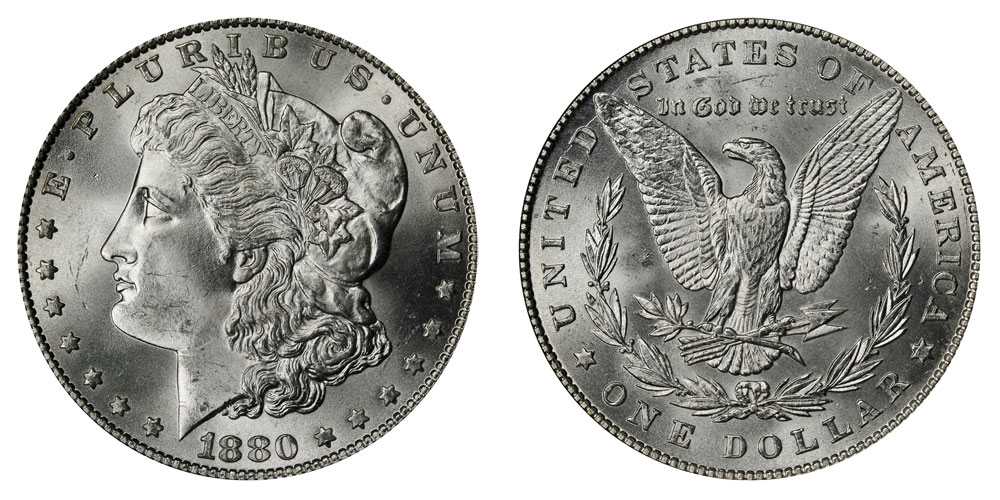 1880 marked only the third year of production for the Morgan dollar, and already Treasury vaults were choked with them. Q. David Bowers quotes President Rutherford B. Hayes in 1880 as saying, "We have minted 72 million silver dollars and, we have spent a lot of dough trying to keep them in circulation, but they keep coming back. The people don't want them."

(Hayes had vetoed the 1878 Bland-Allison Act that authorized the Morgan dollar, fearing that a deluge of new silver dollars would cause out of control inflation. Congress overrode his veto.)

Coin collectors in later years were similarly disinterested in the 1880 Morgan dollar. Today, they are collected mainly for the various "80 over 79" overdates that were made when leftover 1879 dies were re punched to use them in 1880.

The Value of An 1880 Morgan Dollar

The 1880 Morgan dollar is not an exceptionally rare date, though it does carry a small premium over common date Morgans. The 1880 issue becomes scarce in Mint State, especially at MS65 and above.

The guidelines below will apply to all Morgan dollars, not just the 1880-P.

Light to moderate wear, but significant features should be sharp. High points on Liberty's hair may be worn, but you should still some strands of hair over Liberty's ear. Light wear on high spots on the cotton balls and leaves.

Most feathers on the eagle's head and breast will be worn away, but a few feathers need to still be visible in both places. The tip of the right-wing will show some wear.

Slight wear on the eagle's breast, legs, and right wingtip are acceptable.

Only the slightest evidence of wear is allowable. Check the hair over Liberty's forehead and ear, and above the date. The edges of the cotton leaves may show the tiniest traces of wear.

Uncirculated coins are coins that were never paid out to the public. They are new coins that remained in storage at the Mint or at a bank, where a collector bought them before they could be released to the public. But this doesn't mean that they are flawless.

Soft silver coins could strike each other as they were ejected from the coin press into a holding bin. This was common with the large, hefty Morgan dollars. Coins could also inflict damage on one another when poured into large canvas bags for storage and shipment. The bags the U.S. Mint used for Morgan dollars held 1,000 coins. These 60-pound bags were slung into vaults like sacks of potatoes, because who cared about coins that were going to get worn down with use, anyway?

Mint State 61 Morgan dollars may have a few heavy bag marks, in addition to several scratches. Low tier uncirculated coins like MS61 and MS62 have little to no eye appeal. Nice About Uncirculated Morgan dollars often are more attractive than an MS61 coin.

MS 63 Morgan dollars are notably more attractive than an MS61. It may have some small light scratches in high profile areas.

Mint State 65 Morgan dollars are very pleasing to the eye. There may be some very light scratches in secondary areas, but the main focal points of the coin should be blemish-free and retain its original luster.