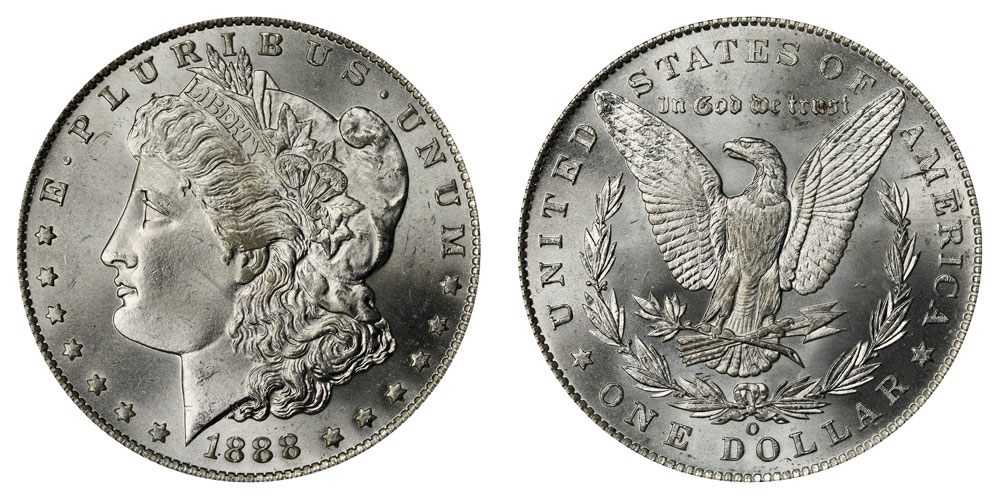 More than 12 million 1888-O Morgan dollars were minted. Most were squirreled away in Philadelphia Mint and Treasury Department vaults after the New Orleans Mint shut down. They began appearing (mostly in the Western US) in 1946. A second disbursement occurred through the mid- to late 1950s.

A veritable flood of 1888-O Morgan dollars hit the market from 1962 through 1964. Unlike the famous Treasury vault disgorgements at the same time, these came from the vaults at the Philadelphia Mint. Estimates of the number of 1888-Os released range from hundreds of thousands to more than a million.

The 1888-O Morgan dollar is a typical common date mintage in all circulated grades. Mint State grades up to MS64 are also common. It is easily found in MS65. This is even though multiple millions of 1888-O Morgan dollars are thought to have been melted under the Pittman Act of 1918.

Like many New Orleans mintages, the 1888-O Morgan dollar was weakly struck with dull luster. Sharply-struck examples with good luster exist, but are only a small portion of the entire mintage.

While "negligence" would be too harsh a word, the mint's inattention to detail did have the happy side effect of creating two spectacular error rarities: The "Hot Lips" DDO, and the "Scarface" 1888-O Morgan dollars.

The "Scarface" 1888-O Morgan dollar is the result of a prominent die crack giving Liberty what looks like a knife scar diagonally across her face.

Both these coin errors are immensely popular, with prices to match.

The guidelines below will apply to all Morgan dollars, not just the 1888-O.

The prices provided below are a general guide: No two coins are ever quite the same. That’s especially important to keep in mind when you see recent auction prices for a particular type of coin.

Coin auction data is regularly updated by Heritage, NGC, and PCGS. You should absolutely review recent auctions to get a ballpark estimate of what a coin is worth.

However, collector interest can vary from one auction to another, even for virtually identical coins. A coin with a lower grade or “book value” may sell for a higher price based on the appearance of the coin, where it is sold, and what pedigree or provenance it carries.

VF Morgan dollars will show light to moderate wear on the highest points of the design. All major details will still be fully visible. Some minor loss of detail along Lady Liberty's hairline will be apparent. There must be strands of hair still visible over the ear to qualify for a VF grade. The cotton and leaves in Liberty's hair will have lost some detail.

On the reverse, the feathers will be worn away from the eagle's breast except at the very top. The head and neck will be worn to a less degree. The very tip of the right wingtip may show wear.

An XF (sometimes abbreviated EF) Morgan dollar will only have light wear overall. 90% of the original details should remain. The cotton boll will retain nearly all of its original detail. Edges of the leaves will show light wear. Slight wear will be seen on Liberty's cheek and high points of the hair.

The eagle's breast and leg feathers on the reverse will show more detail than on a VF coin. Only the highest points should exhibit wear. The right wingtip will show light wear. The rest of the wings will still show finer detail in some spots.

An About Uncirculated Morgan dollar will have extremely light wear that may be barely visible at all. An AU Morgan dollar will generally have very good eye appeal, even when compared to low-end Mint State coins. The coin will have nearly complete luster, only missing a bit of detail from the cheek and very highest points of relief. Any abrasions and scratches will be small and not distract from the rest of the design.

As a rule, uncirculated coins will have complete mint luster. Uncirculated coins are graded from Mint State 60 (MS60) to Mint State 70 (MS70). An MS60 coin has never circulated, but will have significant marks that detract from eye appeal. A MS70 coin is one that is flawless, even under 5x magnification.

MS61 coins display far less eye appeal than a comparable About Uncirculated coin. It will have numerous marks and abrasions, especially distracting ones across Lady Liberty's face. Nonetheless, the relief details of the coin are not worn away, meaning it will grade as Mint State.

An MS63 Morgan dollar will have substantially more eye appeal than a MS61 or MS62. There may be several scattered marks, but none that are particularly heavy. In terms of collectible status, MS63 is considered the "Choice Uncirculated" grade.

MS65 Morgan dollars are very attractive and colloquially called "Gem Uncirculated." Only the very slightest nick on Lady Liberty's face or other minute marks keep such a coin from grading even higher. Overall the coin will have exceptional eye appeal and crisp relief details.