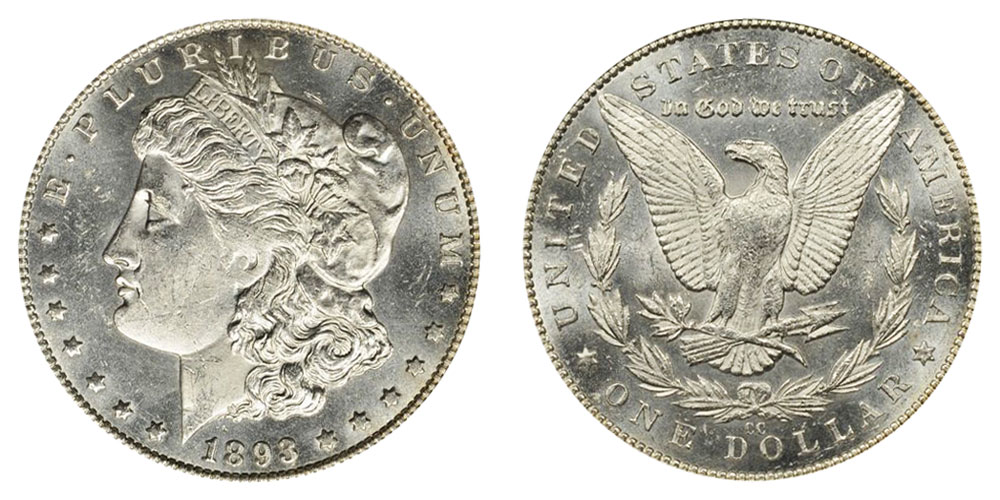 The 1893-CC Morgan dollar was the last silver dollar produced at the Carson City Mint. As such, it has always been a popular coin to collect. While the mintage of 677,000 dollars may seem small, it was the most Morgans produced that year of any US Mint.

WHY DID THE CARSON CITY MINT CLOSE?

The Carson City Mint closed for the final time on June 1, 1893. The presses were mothballed, and the employees in the coining department were let go. The facility continued operation as a US Assay Office until 1933, when it was closed completely.

There were three reasons the Carson City Mint was closed for good.

The Value of an 1893-CC Morgan Dollar

The 1893-CC Morgan dollar is considered a key date of the series. Only the 1889-CC and the 1879-CC have fewer Mint State survivors among Carson City Morgan dollars. The low number of survivors, and nearly non-existent number of coins in high Mint State mean that some collectors will need to make compromises.

NGC and PCGS together have recorded only 24 at MS65, and one each at MS66. The actual number is undoubtedly lower. At this level of rarity, collectors will submit a coin multiple times in an effort to secure the highest grade.

1893-CC Morgan dollars usually have a weakly struck center on both sides. Mint State grades often feature a pleasing luster. Unfortunately, that is offset by heavy bag marks, which limit their grade. This means that most Mint State 1893-CC Morgans are in the MS60–MS62 range. If you devote the time, nicely struck coins can eventually be found, for a price.