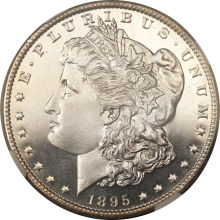 The 1895 Morgan dollar from the Philadelphia Mint may be the most famous US silver dollar in the world. Only the 1804 silver dollar has a greater reputation. That's because, even though the records show that a tiny 12,000 Morgan dollars were struck in 1895, no one has ever seen one.

The only 1895 Morgan dollars that are known to have actually been released are 880 proof versions. It is estimated that roughly half of these coins still exist. This means there are approximately 400 coins that every Morgan dollar collector must compete for, if they want a complete date set.

The Value of an 1895 Morgan Dollar

How Many 1895 Morgan Dollars Are There?

These inflated numbers are due to collectors re-submitting their 1895 Morgan dollars, hoping to get a higher grade than it earned previously. Another reason for multiple resubmissions is attempting to get the coin a Cameo designation, or a coveted Deep Cameo ruling for a Cameo coin.

The Mystery of the Missing 1895 Morgan Dollars

If 12,000 "regular" business strike Morgan dollars were made in 1895, what happened to them? Why has not a single one come to light? (Any circulated 1895 Morgan dollars are considered proofs that were spent as money, possibly during the Great Depression.)

There are several theories on their fate. The popularity of each theory has ebbed and flowed over the more than 100 years since.

This last theory is backed up by two prominent numismatists of the day. In the June 1898 "Numismatist" magazine, coin expert George W. Rice notes "In 1895, Proofs only, numbering less that 1,000, were struck."

ANA Governor Charles Steigerwalt wrote in December 1898: "Dollars of 1895 from the Philadelphia Mint are only found in Proof Sets." As a well-connected Philadelphia coin dealer, he would have been well-informed of the activities of the Philadelphia Mint.He would know if any regular 1895 Morgan dollars had been struck.

These testimonials back up research conducted in 2015 into the mystery. This research in the origin of the 12,000 1895 Morgan dollars focused on the June 1895 audit at the Philadelphia Mint. Both the Superintendent and Chief Coiner were replaced in 1895, so an accounting of coins and unminted precious metal had to be conducted.

According to the audit, there were 48,000 1894 Morgan dollars on hand, and 13,000 silver dollar blanks. After receiving the audit, the Director of the Mint in Washington DC ordered that the 13,000 blanks be minted into dollars. A few days later, the Coiner recorded that 12,000 Morgan dollars had been delivered. It is assumed that the remaining 1,000 blanks were defective, and melted.

There is a theory that, since there were no plans to strike Morgan dollars in 1895, leftover 1894 dies were used to strike these 12,000 coins. There was no need to carve a new hub and make new 1895 Morgan dollar dies for so few coins.

A similar theory is that, since the blanks had been made in 1894, the coins should be struck with 1894 dies. This way, any errors would be attributable to the outgoing Superintendent and Coiner, instead of their successors.

These theories are backed up by the 1895 Annual Report of the Philadelphia Mint. It notes that 12,000 Morgan dollars were reported delivered in June, but the entry has an asterisk. The corresponding footnote says "12,000 coined in 1894".

Other theories run afoul of this evidence, either ignoring the rejection of orders for 1895 Morgan dollars, or the results of the June 1895 audit.