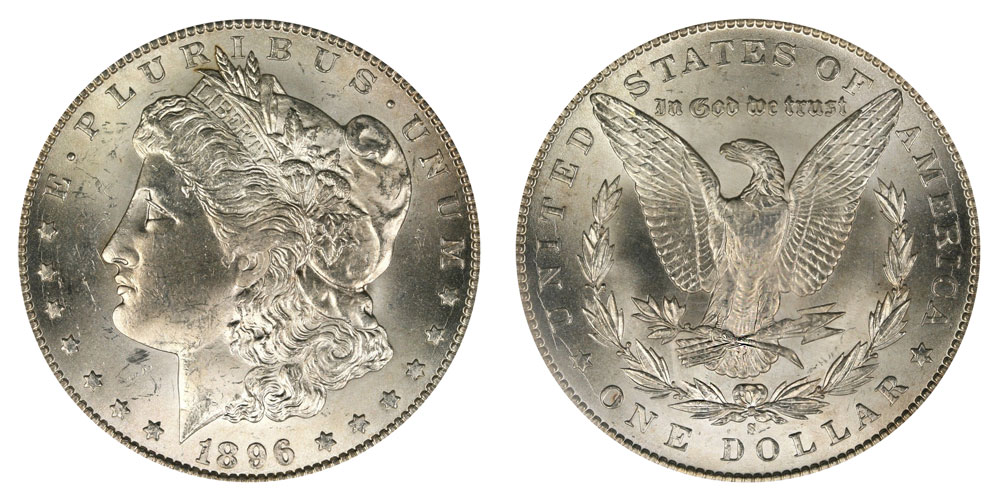 Most of the 5 million 1896-S Morgan dollars were in circulation by the 1950s. Little attention was paid to the date until the boom in Morgan dollar collecting in the mid-1960s.

Many of the relatively few surviving Mint State coins show a large number of marks and scratches suffered while in storage. However, the mintage is generally attractive for a late-date San Francisco Morgan dollar. Most of them have good strikes and a pleasant luster.

Beware of counterfeit 1896-S Morgan dollars that have been made by bonding a fake "S" mintmark on the reverse of the extremely cheap Philadelphia mintage of this date.

PCGS puts the surviving population of 1896-S Morgan dollars at a half-million in all grades. A mere 28,000 of these are in Mint State, and only an estimated 156 of these are MS65 and above!

As extremely rare as high grade Mint State 1896-S Morgan dollars are, NGC has graded one MS67. PCGS has also graded one MS67 (which might be the same one), and one at an astounding MS69!

The 1896-S Morgan dollar is readily available in lower circulated grades (VF30 and below), but is by no means a "common date" coin, as the prices show. Prices rapidly ramp up at XF40 through AU58. With Mint State coins as low as MS61 selling for $3,000, prices for XF and AU examples remain high.