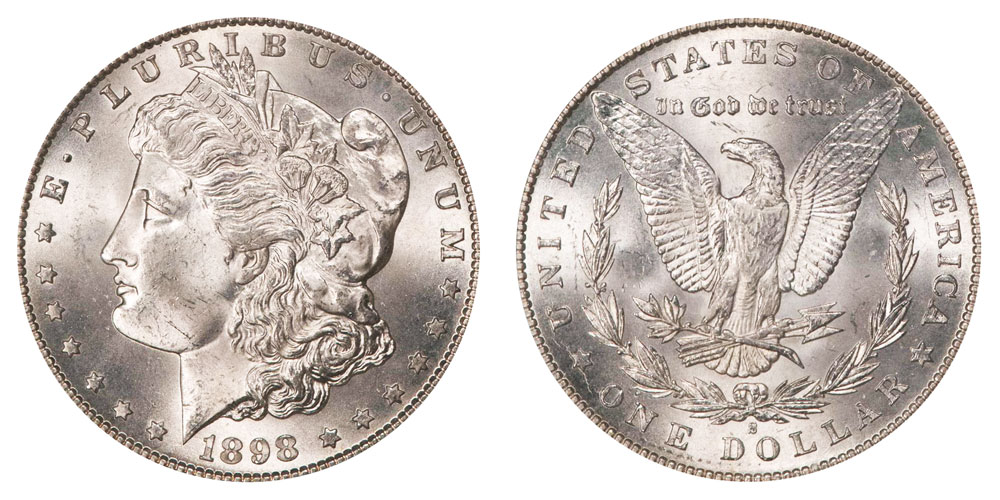 The 1898-S Morgan dollar is a somewhat common coin, in both circulated and lower Mint State grades. Strike is usually average, though weakness in the center of the coin afflicts many. Sharper strikes are available with little effort. Prices above MS65 rapidly escalate. The 1898-S is unusual in that the highest certified grade is MS68.

Most 1898-S Morgan dollars were released into circulation from the 1920s through the 1950s. They were a common sight in Las Vegas casinos at the time. They have never seen much collector interest. No major varieties are known. The 1898-S Morgan dollar is priced a bit above the massive common date mintages.

The guidelines below will apply to all Morgan dollars, not just the 1898-S.

Morgan dollars, like all coins, are valued on their rarity and condition. The condition of a coin can greatly affect its value. You can see this in the prices posted above. An 1898-S Morgan dollar graded AU55 is worth twice as much as one graded XF45. This price escalation continues into the Mint State grades.

Before the 1980s, coin grading was more a matter of opinion than anything else. Two coin buyers or coin dealers could honestly arrive at different grades for the same coin. Because a difference in even one grade for a rare coin could mean hundreds or thousands of dollars, a standardized grading system was developed.

Based on the original Sheldon Scale for large cents, this 1 to 70 grading scale set forth the criteria that must be met for a coin to achieve each certain grade. The advent of third-party coin grading services beginning in the 1970s popularized standardized coin grading.

The American Numismatic Association, working with famous coin experts, have made specialized grading metrics for many popular coins -- including the Morgan dollar. There are particular places on Morgan dollars that will show the most wear. Knowing where these places are will help you quickly narrow down the condition of a Morgan dollar.

Very Fine (VF25) Morgan dollars, although worn, retain all major details. Much of the minor details on high points of the coin have been worn away. Circulation damage may be present, holding back the coin from a higher grade. Liberty's hair will show flatness, especially along the hairline above the forehead, over the ear, and down next to the date. Her cap will be flat as well.

On the reverse, the breast and legs of the eagle are worn smooth. Only traces of feathers remain on the sides. Wing feathers are present but worn.

Extremely Fine (XF45) Morgan dollars will have light wear overall. Most details will be visible. Any circulation damage will adversely affect the grade. The high points on Liberty's profile will show wear, but to a lesser extent than a VF Morgan dollar. Liberty's cheek should show less abrasion. Minor details on the cotton bolls and wheat stalks should be partially visible.

The breast and legs of the eagle on the reverse will not be as worn as a VF coin. This will allow traces of feathers to show. Wing feathers will be only lightly worn, except at the high point on the right wing.

About Uncirculated AU55 Morgan dollars will only have extremely light wear that is sometimes hard to find at first glance. This grade's alternate name, Almost Uncirculated, might be a better description of an AU55's condition. An AU55 Morgan dollar should display nearly complete to complete mint luster. This luster may be missing from Liberty's cheek and the very highest points of the coin.

Mint State Morgan dollars are also known as Uncirculated. As the name suggests, these coins never entered circulation. They could have been stored in vaults at the U.S. Mint where they were struck, sent to the Treasury Department in Washington D.C. for storage, or ordered by banks that never got around to disbursing them.

The thing that they all have in common is that they were never spent.

However, "Mint State" or "Uncirculated" does not mean undamaged. There were many opportunities for Mint State Morgan dollars to get damaged before a coin collector ever saw them. The most common damage is called "bag marks". Morgan dollars were stored in big canvas bags that held 1,000 silver dollars. Most Morgan dollars spent many decades in Treasury Department vaults, until they were all distributed by the bag in the 1960s. Since they were originally supposed to circulate, they were treated the same way quarters, nickels, dimes, and cents are treated. They were bagged by mechanical counters, then tossed into storage. This jostling and banging together gave many of the Morgan dollars inside these bags scratches, marks, and even gouges.

But since they hadn't been paid out, or the bags even opened, they were all still Mint State (Uncirculated). This is why Mint State coins are graded in 11 levels, from MS60 to MS70. Because Morgan dollars were handled like any other circulation coin, there will never be a perfect MS70 Morgan dollar.

A MS61 Mint State Morgan dollar will have substantial mint damage. Many large and small bag marks, and even gouges makes this coin unattractive. It is readily apparent when a coin is going to grade as low as MS61. Coin collectors will not waste money having such a coin professionally graded unless it is a rare mintage.

The MS63 coin will have average eye appeal and full mint luster. It should exhibit a good to sharp strike. It will still have a number of bag marks and possible scuffing on Liberty's cheek, but nearly to the extent of the MS61 Morgan dollar.

A MS65 Morgan Dollar has a sharp strike and full mint luster. It will have very few marks, none heavy. There might be faint friction on Liberty's cheek or the eagle's breast. The very attractive eye appeal of the MS65 1899 Morgan dollar explains its price of more than double that of a MS63 grade.