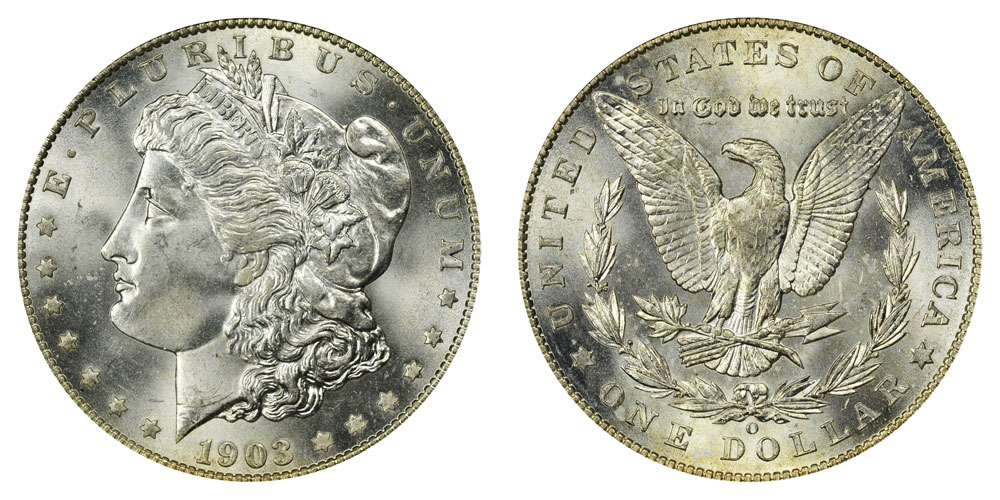 The 1903-O Morgan dollar was once considered the rarest Morgan dollar in existence. Most dealers and even the richest collectors had never seen one. This made the 1903-O THE key date Morgan dollar, more rare than even the 1893-S.

Contemporary accounts in the early part of the 20th century estimated ten or fewer 1903-O Morgans existed, out of a mintage of almost four and a half million coins. Common consensus was that they had all been melted in 1918 under the Pittman Act.

It seems that practically the entire mintage of 1903-O and 1904-O Morgan dollars went straight from the coining press to the vault at the New Orleans Mint. Even though the Mint itself ceased operation in 1909, these silver dollars laid undisturbed in its vaults for another 20 years. In 1929, they were shipped from New Orleans to Philadelphia, where they promptly went into long-term storage for the next 33 years.

The minimal moving around of the dollar-filled canvas bags meant that 1903-O Morgan dollars generally have fewer bag marks than other silver dollars of the era. Many have retained a beautiful luster. Strike quality can vary from unremarkable to sharp.

It is still considered a scarce coin, with PCGS estimating around 445,000 1903-O Morgan dollars exist in all grades—one-tenth the original mintage. The vast majority apparently went into the smelter in 1918 to be sold as bullion to Great Britain.