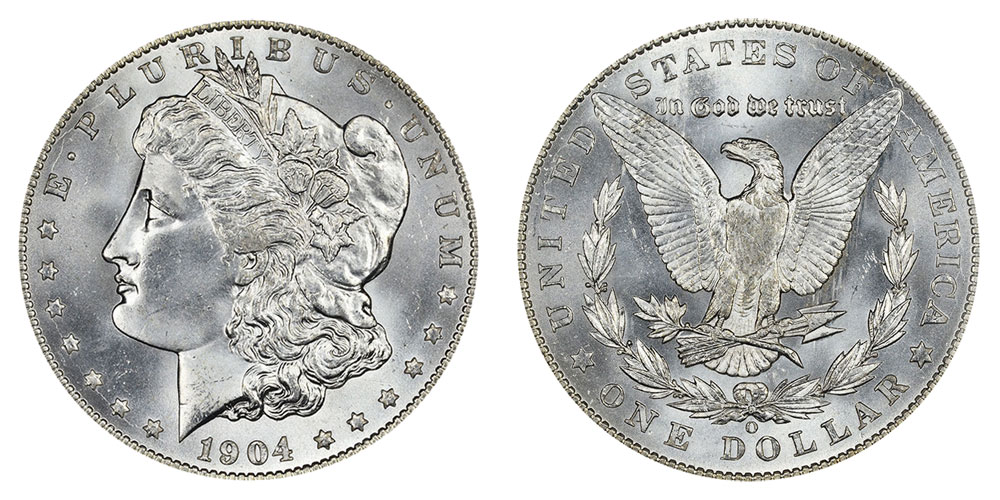 Minor silver coins would be struck in New Orleans until the Mint was closed down for good in 1909. (Trivia: more than ten million Morgan dollars of several different dates remained in storage at the New Orleans Mint for twenty years after it was shut down. They were all shipped to the main U.S. Mint in Philadelphia in 1929 and stored in sealed vaults.)

It is estimated that only a few hundred thousand 1904-O Morgan dollars were released into circulation, with most of the 3.7 million production run going directly into the vault. These coins were assumed to have been among the 270 million silver dollars melted down in 1918 under the Pittman Act.

This extreme shortage of 1904-O Morgan dollars in any condition, much less Mint State, made the coin one of the rarest Morgan dollars of the entire series for fifty years. This situation was turned on its ear in 1962, when over one million 1904-O Morgan dollars were disgorged from long-term storage at the Philadelphia Mint. More of the coins were later released from U.S. Treasury Department vaults in Washington, D.C.

The 1904-O went from one of the rarest New Orleans Mint Morgan silver dollars to one of the most common literally overnight. Like some other mintages where nearly all the coins were unknowingly hidden away in government vaults until modern times, the 1904-O Morgan dollar is actually more scarce in circulated grades than in low Mint State.