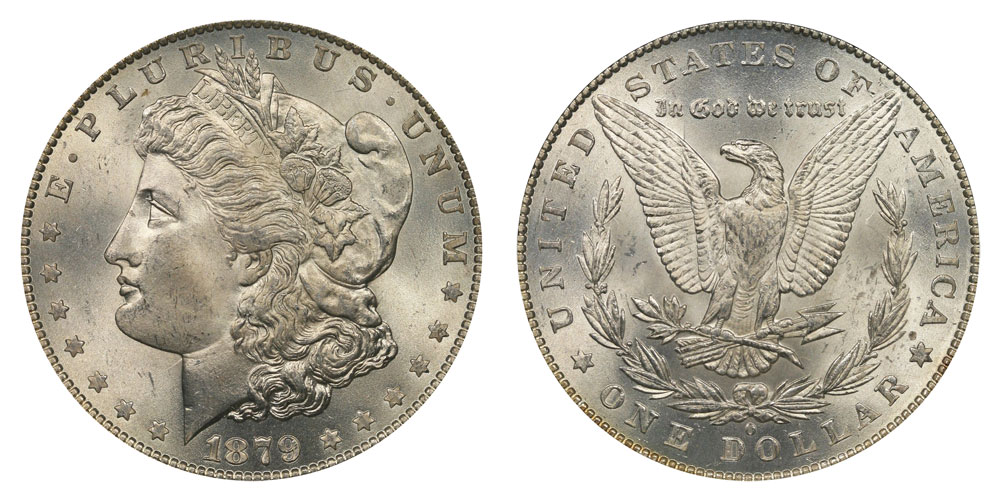 The New Orleans Mint returned to operation in 1879 for the first time since the Civil War. The passage of the Bland-Allison Act in 1878 meant that the US Mint was suddenly charged with striking millions of new silver dollars each month. This was in addition to the coinage actually needed.

The only way to increase Mint capacity quickly was to return the old New Orleans Mint to operation. Repairs and installation of new equipment began in 1858, and the first "O mint" Morgan dollars rolled off the presses on February 20, 1879.

Perhaps because it was made early in the series and there was call for coins in circulation in the Mississippi Valley area, many 1879-O dollars were paid out into circulation at or near the time of striking. Even so, just a part of the mintage was distributed.

Unlike later years, most of this first run of New Orleans Morgan dollars went into circulation. Strangely enough, much of the mintage returned to the Mint in the years immediately afterward. They were counted back into 1,000-coin canvas Mint bags and tossed into long-term storage.

These coins would not re-emerge for nearly 100 years. All remaining "O" Morgan dollars were transferred to the US Treasury vaults in Washington, DC after the New Orleans Mint closed for good in 1911. These were paid out in the mid-20th century, culminating with the great Morgan dollar disbursements of 1962–1964.

Many thousands of 1879-O Morgans found in these sealed Mint bags seem to have circulated briefly, then returned to the New Orleans Mint. Most of these coins were graded AU when they entered the market in the 1960s. This hoard of lightly circulated 1879-O Morgans pushes prices at AU55 to half that of MS61s.