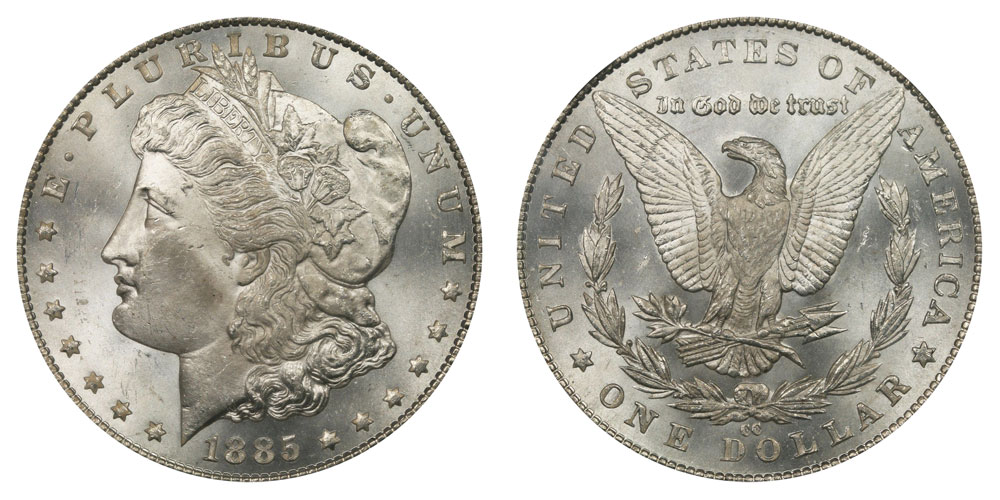 The 1885-CC is the lowest Morgan dollar mintage from the Carson City Mint. Since most of the tiny mintage never saw circulation, it is also the most rare Morgan dollar of all in circulated grades, including the famous 1893-S. It is estimated that 10% or less of the 228,000 mintage saw use.

The minuscule mintage of the 1885-CC Morgan dollar, combined with their being made in Carson City, keeps demand and prices high. This wasn't always the case, as difficult as it is to believe. Bags of 1885-CC Morgans appeared sporadically from the 1930s until the 1950s. The mid- to late 50s saw relatively large numbers come out of hiding from government vaults.

The influx of coins led the 1885-CC Morgan dollar to be treated as scarce, rather than rare. The heavy bagmarks on most of the coins did not help their popularity. Few were seen in the great Morgan dollar disbursement at the Treasury Department in 1962–1964, before someone there realized Carson City silver dollars were worth much more than face value. The last 1885-CC Morgans were sold in the GSA Morgan dollar sale of 1980.

1885-CC Morgan dollars are available up to MS66, priced around $2,000. The few higher grade examples fetch prices in line with their rarity. Perhaps a dozen exist above MS67. Prices are high, and basically flat across the spectrum of circulated 1885-CC Morgans, a reflection of just how rare they are.

Many Mint State 1885-CCs suffered from storage, and their train ride from Nevada to Washington DC. The copious bag marks prevent these coins from getting a higher grade. This is regrettable, since most of them have sharp strikes very good luster.