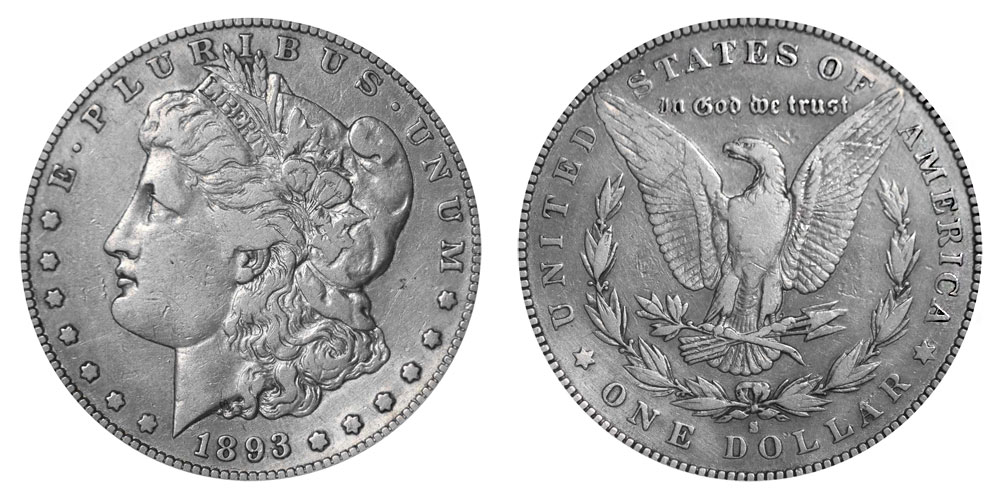 A rough estimate of survivors by PCGS gives around 10,000 total coins, with 123 Mint State. 18 of the Mint State coins would grade MS65 or higher. These numbers assumed to be wildly inflated, due to resubmissions. PCGS shows a population of nearly 4,000 1893-S Morgan dollars grading VF15 to Poor 01. The fact that someone spent the money to grade a 1893-S Morgan dollar where you can only see the outline of the head is testament to just how rare and expensive this coin is.

Being the rarest Morgan dollar, many to most of the highest grade examples move between rich collectors in private sales. Some of these confirmed person to person sales are reported to be for more than a million dollars for the highest MS66–67 grades

One at any grade can cost thousands of dollars.Even a damaged 1893-S Morgan dollar, worn badly enough to be nearly unrecognizable, will often sell for $1,000 or more.

The high prices for a 1893-S Morgan dollar had made it the target of counterfeiters for more than a century. In fact, the ultra low number of survivors means that there are probably more counterfeit 1893-S Morgans than there are real ones!

This is a case where the third party grading services are your friend. You can look up the serial number on the case of a graded coin from NGC or PCGS, and see a photo that you can compare to the coin you are thinking of buying. Don't assume that because a coin is in a slab that it's genuine. Modern counterfeiters can make fake slabs and labels as easy as they make fake coins.