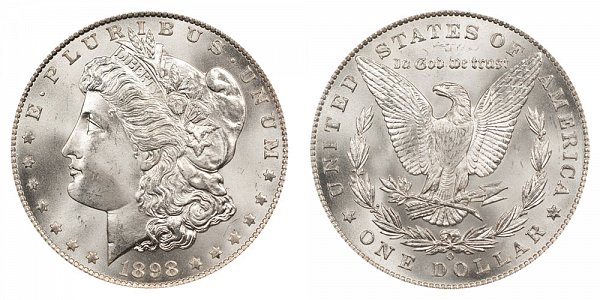 The 1898-O Morgan dollar is one of the "heartbreaker" mintages of this famous coin.

The 1898-O Morgan was once one of the great rarities in the series. They seldom appeared on the market, and commanded top dollar when they did. This meant that many high tier New Orleans Morgan dollar collections were missing the 1898-O in any grade. According to some experts at the time, it was the third-rarest of all Morgan dollars

This is because almost no 1898-O Morgans were released into circulation. Almost all of the 4.4 million coins minted were stored in the New Orleans Mint's vaults. When the Mint was shut down for good, the contents of its vaults were transferred to long-term storage at the Treasury Department in Washington DC.

In October 1962, the Treasury Department disgorged millions of Mint State Morgan dollars from long-term storage. Among these were hundreds of thousands of uncirculated New Orleans Mint Morgans, including the 1898-O. The price of the 1898-O Morgan dollar fell 95% as soon as it was realized how many had suddenly flooded the market. It remains a relatively inexpensive New Orleans Morgan dollar

Due to the flood of Mint State 1898-O Morgan dollars from Treasury vaults, this is another mintage where circulated coins are not as common as Mint State examples.