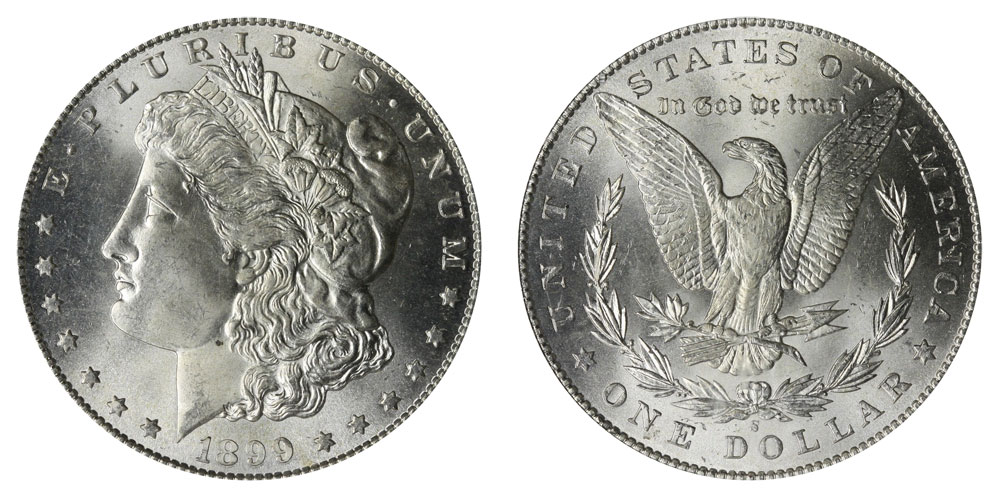 The good luster on many surviving 1899-S Morgan dollars is due to the fact that few of them seem to have circulated. Worn pieces do not have prices that reflect their rarity. This is because of the large number of lower Mint State (MS60-MS62) coins that are available. Nonetheless, 1899-S Morgans carry a moderate premium over common date Morgan dollars.

The guidelines below will apply to all Morgan dollars, not just the 1899-S.

The two major determinants of value in Morgan dollars is rarity and condition. A standard grading scale for coins was adopted in the 1980s. It runs from 1 (barely identifiable) to 70 (perfect, even under 5x magnification). Known as the Sheldon scale, these numeric grades are more precise than the old adjectival descriptions.

The advent of third-party coin grading services in the 1980s has helped standardize coin grading. These companies grade coins, then seal them into clear plastic cases (slabs) displaying the coin's grade. This is a good resource for learning to estimate coin grades yourself. Examine a slabbed coin and challenge yourself to spot why the coin received the grade it did.

There are particular places on Morgan dollars that play a large part in the grade they receive. Note that damage, especially in the coin's fields, adversely affects a coin's grade.

A Very Fine 1899-S Morgan dollar will have medium to light overall wear. The hair from above the ear to the forehead on Liberty will be flat. Moderate flatness and abrasion can be evident on the cheek, forehead, and throat.

Other high points like the tip of the cap and the cotton in the headband will also show flatness and wear. The breast and the legs on the eagle will be flat. Details may be missing on some wing feathers, especially on the right wingtip.

Feathers will be seen on the side of the eagle's breast and legs. The eagle's head shows more detail than a VF coin. Feathers are missing fine detail, especially on the right wingtip.

An AU 1899-S Morgan dollar will show only the slightest wear. Mint luster should be nearly complete, aside from the highest points of the coin. A coin awarded AU58, the highest circulated grade, will often present greater eye appeal than a MS60 or MS61 uncirculated coin.

Uncirculated 1899-S Morgan dollars are those coins that were never paid out from a bank. Also called Mint State, many of these coins never left control of the U.S. Mnit or the Treasury Department.

That said, a Mint State grade does not equal an undamaged coin. All circulating coins, not just Morgan dollars, were poured into large canvas bags for storage and transportation. The coins would scrape and rub against one another in these bags as they were moved. They were expected to get worn and beat up in the normal course of commerce, so no special effort was taken when storing and shipping them.

The only thing a Mint State 61 1899-S Morgan dollar has going for it is it's uncirculated status. A coin receiving this grade will have a large amount of heavy and light damage. It usually has a weak strike and incomplete or damaged luster. It is rare to see anyone bothering to have this grade authenticated. There is no market for MS60 or MS61 coins unless they are extremely rare.

The MS63 1899-S Morgan dollar will have ordinary eye appeal. It will have a good to sharp strike, with full mint luster. It will have fewer bag marks, and no heavy bag marks. It will still have enough damage to be distracting. Some scuffing on the cheek is not uncommon.

MS63 and MS64 are usually the most popular uncirculated coin grades. They are notably more attractive than lower grades, but do not carry the hefty premium commanded by MS65 coins.

The MS65 1899-S Morgan dollar boasts a sharp strike and full mint luster. Any marks will be light and scattered. Very light friction might be visible on Liberty's cheek and the eagle's breast.

The prices of Morgan dollars at MS66 and above are prohibitive for the average collector. For example, a MS66 1899-S Morgan dollar costs triple what a MS63 does. This makes MS65 Morgan dollars the preferred grade for serious collectors.